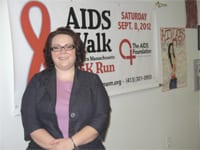 Jessica Crevier recalls a friend with AIDS who could have used a helping hand.

“I’ve had a number of experiences working with people with HIV and AIDS over the years,” she said, “but my first experience was seeing somebody I worked with who was discriminated against, and watching as he struggled — not only with his health, but also with the social stigma and losing his job and not having the support to maintain his dignity and quality of life. And that stuck with me.”

Later, while working on her master’s degree in Nonprofit Management and Philanthropy at Bay Path College, Crevier was asked by a professor — a trustee with the AIDS Foundation of Western Mass. — to assist with one of that organization’s events. It turned out to be a life-changing experience.

“When I met with people and saw how dedicated and passionate they were, I was completely hooked,” she said. “After less than a year, I was invited onto the board of trustees.” About five years into that role, the board wanted to hire an executive director, and Crevier got the job. “I wanted to build a career around working with people with that much passion. It was a thrilling prospect.”

She tells the story of her late friend as a real-life example of the kind of person the AIDS Foundation can help — through its grant program, connections to health resources, and education campaigns aimed at reducing both the incidence and stigma of AIDS and HIV — if only it can effectively reach those people. With a paid staff of exactly one — that would be Crevier — it’s a challenge, but one she readily embraces.

One problem, she says, is that media coverage of AIDS isn’t as intense as it was in the ’80s and ’90s, so people tend to underestimate its seriousness, or not think about it at all.

“It’s a double-edged sword,” she said. “People aren’t hearing about it as much because people aren’t dying from it at the rate they once were, and that’s a good thing. But what’s bad is that it’s seen as a chronic disease as opposed to a terminal illness. People aren’t seeing it as such an emergency or viewing it as something as devastating as it still is.”

This month, Crevier sits down with HCN to talk about how she and the foundation she leads are trying to shake up that apathy and make a real, often life-saving difference in people’s lives.

The AIDS Foundation has three missions: providing financial assistance to more than 100 patients a year for expenses like rent, utilities, medications, and other basic needs; educational components, including the training of young peer educators to bring awareness into high schools and colleges; and referral services to help people with the disease access health care and other resources.

But the original goal of the foundation the grant program, and that remained the major focus for the next 15 years. “Then we started noticing a trend — that Greater Springfield has the greatest rate of infection in the state,” Crevier said. “It’s still at epidemic proportions.”

Springfield and Holyoke bear the largest brunt of this trend, with about 1,200 known cases of AIDS in Springfield alone, although the actual number is far higher, since only about one in five people infected with HIV are aware of it. There are plenty of reasons for that. People often don’t want to get tested because they fear the diagnosis — or the reaction of family and friends — or they simply don’t have the awareness to realize HIV might be a possibility.

“There’s nothing at this point that’s turning that tide” of the region’s high infection rate, Crevier said. “Part of it is the demographics; people of color, which are the majority in the Greater Springfield area, are disproportionately affected, as well as intravenous drug users.”

But what can be changed, the foundation’s board realized, is awareness, which is why, about five years ago, the AIDS Foundation began putting a high priority on education.

“There is no cure right now, but the disease is still 100{06cf2b9696b159f874511d23dbc893eb1ac83014175ed30550cfff22781411e5} preventable, so education is the only tool we have to stop the spread,” she told HCN. “There’s also a tragic amount of stigma surrounding the virus. Students aren’t getting the education they need to make health decisions themselves, so we’re trying to fill those gaps to make sure people have the tools to take responsibility for themselves and to act with compassion to people who are infected.”

In addition, she said, “we try to make certain that people in our community are aware there is free and confidential testing available at a number of local sites.”

“The AIDS kNOw More project started out as a group of students who volunteered at our AIDS Walk & 5K Run and festival in 2008, and decided they wanted to educate themselves, that they weren’t receiving adequate information in their schools’ health programs to make healthy decisions — and they saw the danger in that.”

So five adult volunteers working with the foundation began advising these students, who get together at least once a month and discuss current AIDS-related news and the social implications thereof.

“After about a year, they decided they wanted to take that one step further and educate their peers,” Crevier said. “That can be daunting, and we consider it quite brave, with the stigma around HIV. But they became certified by the Department of Public Health as peer educators in HIV, AIDS, hepatitis, and sexually transmitted infections.

“So now,” she continued, “at least once a month, they go out into the community and present, based on a curriculum they created themselves, basic disease-awareness education in terms of protection, stigma reduction … kind of an AIDS 101-type approach to prevention. They’re basically giving people their age the tools to protect themselves that they wouldn’t otherwise get.”

This approach has brought AIDS kNOw More into local YMCAs, afterschool programs, and other venues.

“It’s worked extremely well,” Crevier said. “Sometimes people are more comfortable talking to their peers as opposed to professional speakers or even teachers. It’s a more comfortable situation, and it’s definitely life-changing — and often life-saving. They’re really getting out there, and we’re really proud of them.”

Meanwhile, the foundation raises funds and awareness through three major annual events. The AIDS Walk & 5K Run, slated this year for Sept. 8 in Forest Park, is a chance to bring the public face to face with social-service agencies and other vendors to share information and learn about the growing need for AIDS-related resources in Western Mass.

In addition, an open-mike candlelight vigil is held in Springfield each year on Dec. 1, World AIDS Day. And a gala is held each winter; this year, it’s scheduled for Jan. 25 at the Log Cabin in Holyoke and will commemorate the foundation’s 20th anniversary. Other events, like a recent beer-tasting party in June, are added occasionally to augment fund-raising efforts.

Even when detected early, Crevier said, HIV and AIDS behave very differently from person to person, so the best course is simply to avoid the kinds of risky behaviors — unprotected sex and drug use, for instance — that raise the risk.

But it’s also important that people understand which bodily fluids contain HIV (blood, semen, vaginal fluid, and breast milk) and how they are transmitted, because to reduce the ongoing stigma of the disease, people need to understand how it’s not transmitted — sharing a drink, toilet seats, and hugging, for instance.

The AIDS Foundation remains a small entity, but Crevier wants it to grow, if only to bring that education to many more people in the Pioneer Valley.

“I’m actually the first full-time employee the foundation has ever had, and what we’ve been able to accomplish — which we feel is tremendous — has been on the backs of our extremely dedicated volunteers,” she said. “They make sure everything gets done; they make sure we provide education to people throughout the year, and grants in the neighborhood of $40,000 every year.”

A volunteer board convenes every Monday after work to read every grant application that comes in to make those important decisions, she noted. “I think that’s the heart of our organization — people who aren’t engaged by a paycheck or by incentives beyond a passion for the cause and a knowledge of the needs in our community.”

Thinking back to her first exposure to AIDS Foundation events, Crevier recalls being moved by the gravity of the issue, in terms of people’s health but also, as in the case of her late friend, in terms of social justice.

“I met people who were unbelievably passionate about improving their neighbors’ quality of life and helping and supporting people with AIDS in every way possible,” she told HCN. “And it became my personal mission. At this point, I can’t imagine doing anything else.” 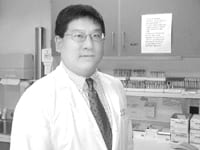