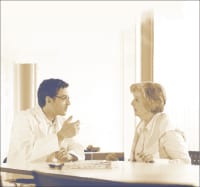 It’s hard to say “I’m sorry.” Especially if it could get you sued.

But physicians in Massachusetts say a new law represents a major breakthrough in how doctors and patients interact after a medical error causes harm — not to mention reforming a medical-liability system that has become onerous and expensive for doctors.

The approach is called ’disclosure, apology, and offer’ (DA&O), and is included in the healthcare cost-control bill passed by the Massachusetts Legislature and signed into law by Gov. Deval Patrick in August.

The reform language was hammered out in multi-year negotiations by representatives of the Mass. Medical Society (MMS), the Mass. Bar Assoc., and the Mass. Academy of Trial Attorneys, all of whom agree that the change will both improve patient safety and reduce the volume of unnecessary and protracted lawsuits — and perhaps lower ever-spiraling insurance costs for physicians.

At the heart of DA&O is a six-month, pre-litigation resolution period after a patient is allegedly harmed — a mandatory cooling-off period, essentially — during which time the patient (or his or her family) is allowed access to all pertinent medical records and full disclosure by the provider — and, importantly, the physician is allowed to issue a statement of apology which is inadmissible in court.

“This agreement is an extraordinary accomplishment,” said Dr. Alan Woodward, chair of the MMS committee on professional liability and a past president of the organization. “It will encourage transparency and honesty, protect the rights of patients who have been harmed by avoidable events, improve patient safety, reduce litigation, and ultimately cut health care costs.”

The new openness allowed by the law is perhaps its most striking feature, tearing down the walls doctors and patients erect when something goes wrong and legal action is pursued. Not only does it reduce frustration on both sides at a time when patients want answers, Woodward said, but it can also lead to discussions about what can be done differently next time, bolstering patient-safety measures going forward.

Writing in the New England Journal of Medicine last year, Drs. Tom Delbanco and Sigall Bell, a professor and instructor, respectively, at Harvard Medical School, said patients and families typically wish to go beyond assigning blame, and instead want “to understand their situation fully and to know what the event has taught caregivers and their institutions. Withholding such information can lead to lawsuits if despairing patients feel that a mistake has not been taken seriously. Above all, silence and evasion breed mistrust.”

And it’s the fear of a lawsuit — and the understanding that every word spoken to a wronged patient must be carefully chosen, or it could be parroted back in court, to the doctor’s detriment — that cultivate that very silence, evasion, and mistrust.

“Although full disclosure of medical errors is increasingly recognized as an ethical imperative,” the authors write, “health care providers often shy away from taking personal responsibility for an error and believe they must choose words carefully or present a positive spin. Hospitals, insurers, and attorneys frequently advise physicians against using trigger words, such as ’error,’ ’harm,’ ’negligence,’ ’fault,’ or ’mistake.’ The result can be an impersonal demeanor that leads patients to view physicians as uncaring.”

Doctors say they’re anything but, and at a time when patient safety and reducing medical errors have become a major priority for health systems, many say they embrace this new opportunity to talk about exactly what went wrong.

Physicians describe the DA&O approach as an improvement to the current tort system, which detractors say can lead to a culture of silence and a ’deny and defend’ attitude in the medical community, impede improvements in patient safety efforts, and motivate physicians to practice defensive medicine — ordering unnecessary tests, for instance — that contributes to higher health care costs.

Under the DA&O model, healthcare professionals and institutions, and their insurers, disclose to patients and families when unanticipated adverse outcomes occur, investigate and explain what happened, establish systems to improve patient safety and prevent the recurrence of such incidents, and, where appropriate, apologize and offer fair financial compensation without the patient having to resort to legal action. Patients will always have the right to consult an attorney to advise them of their rights and to evaluate the fairness of any offer or to bring legal action if they so choose.

Woodward stressed that the legislation is only one piece of the whole DA&O movement, which is slowly being embraced across the country; more than 30 states to date have adopted ’I’m sorry’ laws to some degree, and the MMS has been pursuing a statewide law as a way to institutionalize its efforts.

“Disclosure, apology, and offer is really transformative,” he said, “moving from what is a very adversarial model to a model where you advocate for the patient when something goes wrong — from a model that creates a culture of secrecy and blame to a recognition that most errors involve a sequence of events and that we need to fix systems to keep bad impacts from occurring.”

He argued that the long-time status quo isolates patients from providers when something goes wrong at a time when communication is most valuable.

“Fairness is the child of transparency. Too many victims of medical errors are delayed or denied needed compensation due to lack of transparency,” said attorney Jeffrey Catalano, a partner at Todd & Weld in Boston and former vice president of the Mass. Bar Assoc., noting that the law encourages early resolution of complaints while also protecting a patient’s right to seek legal assistance to ensure fair compensation.

“Hopefully, full disclosure will also nurture learning that will reduce medical errors in Massachusetts that cost too many injuries and deaths each year,” he continued. “Importantly, this collaborative effort resulted from the fact that both doctors and lawyers appreciate that disclosure of mistakes also allows healing for both the patient and the physician.”

“Providers are often devastated” after an adverse event, he told HCN, adding that the average length of the court process for a malpractice case is five and a half years — a long time for a stressful situation to linger, for all parties involved. “When providers are sued, their depression rate, divorce rate, and suicide rate all go up in a statistically significant fashion.”

Delbanco and Bell agree. “Clinicians who feel guilty after a medical error may have parallel feelings of fear — fear for their reputation, their job, their license, and their own future as well as that of their own patient.”

The six-month cooling-off period mandated by the new law allows doctors to communicate with patients not only what went wrong, but what the practice or hospital might do to compensate. In fact, this more open process, where it has been attempted, has reduced the rate of lawsuits stemming from patient complaints, Woodward said.

And by no means does the new paradigm bar patients from suing if, after six months, no agreement is reached. “We’re just saying, let’s see if there isn’t a better alternative before we get into a long, adversarial process.”

Meanwhile, it’s not only doctors and patients who benefit, he added. Attorneys don’t always relish spending more than five years on the compensation process and might appreciate a speedier resolution — and Woodward doesn’t want them cut out of the process. “We want the patient to have representation. The goal isn’t in any way to skimp on patient compensation, but to expedite it and make this process fair, equitable, and efficient — which it has not been.”

The disclosure, apology, and offer approach to settling medical liability claims is the heart of a ’roadmap’ prepared last April by the MMS and Beth Israel Deaconness Medical Center in Boston, of which the law is only one — albeit very important — part. Seven hospitals — including all three in Baystate Health — had already launched pilot programs to test its feasibility in different practice environments with different insurance arrangements.

The roadmap report asserted that moving toward DA&O will “enable a fundamental transformation from the current flawed approach to patient safety and medical liability, and put Massachusetts and other states firmly on the road to creating a fair, efficient, reliable, just and accountable system that more effectively supports patient safety.”

Indeed, noted Timothy Kelleher III, president of the Mass. Academy of Trial Attorneys, “honesty and transparency are paramount to the success of this bill and improving patient safety.”

The safety issue roared to the forefront of the healthcare landscape in 1999, when an Institute of Medicine document called “To Err Is Human” reported that up to 98,000 patients die each year as a result of preventable medical errors. In response to that and subsequent reports, health systems nationwide have ramped up safety measures, from better documentation when administering drugs to safer operation of ventilators, reducing the incidence of pneumonia in hospitals.

But groups like the MMS have been saying for years that patients who feel they were wronged or injured need to be part of the remedy when something goes awry. Until now, legal fears placed barriers in the way. While lawsuits are still likely and appropriate in many cases, physicians say, they no longer have to fear their own candor.

“Perhaps most important, building bridges to injured patients necessitates including them and other patients in the development of solutions,” Delbanco and Bell write. “Patients and families will bring ideas to the table that expand the horizons of health care professionals. The yield from working in partnership could be enormous, both improving people’s experience with medical error and preventing harm from occurring in the future.”

And, really, who doesn’t appreciate a simple “I’m sorry”?