HOLYOKE and NORTHAMPTON — Awards, new members, and the final payment toward a $600,000 pledge made headlines at two Cooley Dickinson annual meetings held Oct. 16 and Oct. 4.

Marilyn Tracy, past auxiliary president and volunteer, and Edith Peter, vice president and chief financial officer, received the William E. Dwyer Distinguished Service Awards.The Dwyer award is given each year to outstanding individuals whose service on behalf of Cooley Dickinson exemplifies loyalty, leadership, and dedication to improving the health of the community.

Tracy served as president of the CDH Auxiliary from 2009 to 2011. During her tenure, she helped set the pace for the hospital’s Cancer Care Services and Nursing Education fund-raising campaign through which the auxiliary donated $600,000 to the hospital. A retired Northampton High School social-studies teacher, Tracy has volunteered more than 1,000 hours in seven years at the hospital’s main information desk.

Peter was hired in 1995, a time of instability for the then-168-bed hospital. “Edith quickly brought leadership that was essential to the operation of the hospital,” said Thomas Caine, a 14-year member of the Cooley Dickinson board of trustees and owner of Caine Mitter & Associates, a financial-advisory firm based in Northampton and New York City. “Recently, Edith led the due-diligence review and participated in discussions of the terms of the hospital’s affiliation with Massachusetts General Hospital.

“In my career in finance, I’ve worked with more than 50 CFOs of nonprofits. None of them is more capable or dedicated than Edith.”

Nominated by her colleagues, Christina Trinchero, marketing communications director, received the BECOME award, a recognition that celebrates an employee who models the Cooley Dickinson organizational values. “Colleagues, as well as numerous community members who have worked with her on projects, value Christina’s professional, kind, thoughtful mannerisms,” wrote one nominator.

As with the BECOME Award, recipients of the inaugural Medical Staff Awards were nominated by their colleagues.

The Medical Staff Clinical Excellence Award is given by the Cooley Dickinson Hospital medical staff to a physician who has achieved significant improvement in clinical outcomes. Dr. Richard Levrault has done that by, in the words of one nomination, “consistently demonstrating the ability to use proven research and lead innovation in critical care.”

Levrault is board-certified in internal medicine and critical care. He joined Cooley Dickinson’s Intensivist Program in 2009 and is medical director of Critical Care.

The medical staff gives the Teamwork Award to the physician who demonstrates a highly developed ability to bring teams of clinicians together to improve care. In nominating Dr. Jeff Zesiger, colleagues pointed out that his patients have complex needs and “require a great deal of well-orchestrated attention.” Nominators said he taps resources of multiple physicians as needed and completes “an enormous amount of behind-the-scenes coordination with primary caregivers, visiting nurse and hospice teams, families and direct caregivers, and subspecialty providers.”

Dr. Paul Baecher received the Medical Staff Patient-Centered Care Award. The medical staff presents this award to the physician who demonstrates a high level of empathic care and always looks to the patient’s values to guide decisions. In nominating Baecher for the Patient-Centered Care Award, a colleague described him as “an amazingly humble man who truly puts patients first. He makes home visits to patients twice a week, visits patients in nursing homes, and goes to the office nights, weekends, and holidays to meet patient needs. Paul has been known to complain if the office closes the day before Christmas because patients have to go too long without access to their physician.”

Baecher is certified in family medicine and cares for adults and children as part of the practice of Dr. Katherine Atkinson in Amherst.

The Medical Staff Nursing Care Excellence Award is given by the Cooley Dickinson Hospital medical staff to the CDHCC nurse who best represents teamwork with physicians to drive best clinical outcomes. Jeannie Johndrow was commended by a nominator as championing team-based care every day by coordinating interdisciplinary rounds in which she involves rehab staff, nurses, and physicians in daily discussions about each patient’s care. It was also noted that she encourages early involvement of additional team members, such as social work and geriatric/palliative care.

Johndrow joined Cooley Dickinson in 1967 as a nurse’s aide. Since her 1969 graduation from Cooley Dickinson’s former nursing school, she has practiced as a medical surgical RN and, since 2003, has served as a shift charge nurse.

Hospital Board of Trustees

CDH President and CEO Craig Melin received a check toward the auxiliary’s final payment of its $600,000 pledge to the hospital’s $8.2 million Building Our Future campaign. Campaign funds will be used for the hospital’s new cancer center and for its nursing-mentoring program.

The mission of the auxiliary is to support patient services, support volunteer services, advocate for the hospital, provide educational programs, and raise funds through such projects as the hospital’s coffee and gift shops, corridor art galleries, and the fashion show. 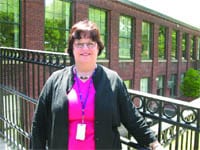