The words can be devastating, both physically and emotionally: “I’m afraid the tests indicate that you have cancer.”
Modern medicine has made great strides in treating the physical disease, but the emotional wringer a cancer patient goes through has not been addressed to any great degree.

That’s where the Cancer House of Hope of Westfield steps in.

“People feel incredibly alone when they become cancer patients,” says Keitheley Wilkinson, the executive director of the Cancer House of Hope. “We provide understanding, comfort, knowledge, and empowerment, thereby reducing fear and anxiety. We teach coping skills and bring them together to see what others are doing and to let them know they are not alone.”

The services provided by Cancer House of Hope are truly impressive. There are programs for patients of various types of cancer, for family members and friends of cancer patients, for professional caregivers such as oncology nurses, for those who have lost a loved one to cancer, and even a group that helps people learn how to reintegrate into their “normal” lives when treatment is over. The programs meet weekly, bi-weekly, and monthly and most meet at night, although there are a few that meet during the day.

And all of the services are free to those who need them.

“We don’t charge for our programs because we don’t want to be an additional stressor in a patient’s life,” Wilkinson told The HealthCare News. “They are financially burdened enough by the cancer.”

Wilkinson goes on to note that the center does not provide medical services nor does it recommend any particular treatment, but it does provide information on various types of treatment. It can also help with referrals for doctors if requested. There is also a newsletter, a library, workshops of special interest, and even social events like buffets and outdoor events such as kayaking, biking, rock climbing, etc.

As might be expected, it was a cancer patient who foresaw the need for such services. The Cancer House of Hope owes its genesis to a conversation between Gaetana Aliotta and a fellow breast cancer patient in 1995. +

Aliotta saw the immediate value of patients sharing thoughts, hopes, and fears, and set about creating a facility that would become a formal support network for cancer patients, family members, and friends.

After two years of work and obtaining community support, she opened the doors to what was then known as the Center for Hope in 1997 as the part-time director. After six months, she stepped aside — she already had a full-time job — and Wilkinson was appointed the full-time director. Aliotta, whose cancer is in remission, continues to serve as an honorary member of the board of directors.

Since its creation, the center has continually expanded its roster of programs. Wilkinson notes that over the years, more than 700 people have attended the support groups and various other programs. Nearly 200 people visit the house each month, most for the programs and some who visit the library.

Somewhat surprising is the high percentage of family members and friends of cancer patients among the people visiting the center — 41{06cf2b9696b159f874511d23dbc893eb1ac83014175ed30550cfff22781411e5}. This statistic speaks volumes about the need for support programs for people who are not patients themselves, she said.

Furthermore, the House has drawn people from 51 cities and towns in both Massachusetts and Connecticut. That’s not surprising, since the programs found at the Cancer House of Hope are not found anywhere else in Western Mass. and Northern Conn.

The age range of the people who come to the House is as diverse as the geographic breakdown, from the mid-teens to late 80s, with most in their 50s, 40s, and 60s, in that order. About 20{06cf2b9696b159f874511d23dbc893eb1ac83014175ed30550cfff22781411e5} are men, and the House even has men-only programs. Wilkinson notes that the great majority of the people who take advantage of their services are referred by friends or family. Many others are referred by nurses and some by doctors.

Upon entering the Cancer House of Hope, visitors are often struck by the fact that they are in an actual house, one donated by Noble Hospital. The center’s creators wanted this atmosphere, and for obvious reasons. “It’s like going to a good friend’s house,” Wilkinson told The Healthcare News. “It’s comfortable, we offer refreshments and snacks. It’s a casual, relaxing atmosphere.”

Furthermore, understanding is a key component of the center’s programs. “All of the workers are actually cancer survivors themselves or have been closely involved with people who have had it, so they know what the deal is,” said Wilkinson.

Fundraising is an ongoing activity at the house, said Wilkinson, adding that many of the activities to raise money have become annual events. These include a tennis tournament and dinner dance in September, a dinner theater evening in March, a bike ride in May, and a bowling tournament in April. Coming up the Monday after Thanksgiving is another annual event, the Luminaria. For a $5 donation, people can light a candle in memory of a loved one and it is then placed in a paper bag. The bags are then lined around the Westfield Green. “That’s a very moving evening,” Wilkinson notes.

Individuals and businesses also make contributions, and the House pursues grants and donations from foundations. Currently, the House does not receive any government funding, but “we may go for government funds in the next year,” Wilkinson notes. She also told The Health Care News that the House has raised a total of $1 million since its inception, and its annual budget is approximately $200,000.

The future holds a great deal of promise for the Cancer House of Hope. The facility is actively exploring expansion into the Springfield area to better serve residents from that area. “We have an advisory committee made up of community leaders from various areas including the local hospitals to help us search for a site and line up support for a house in Springfield,” Wilkinson said, adding that she expects the second location to open within the next year.

The Cancer House of Hope is located at 86 Court St. in Westfield. Those seeking information on its programs can phone: (413) 562-0110 or contact the center via the Internet. The E-mail address is info@cancerhouseof hope.org, and their web site is www.cancerhouseofhope.org. 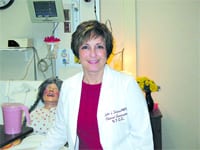 Breathing Easier Many Are Calling Respiratory Therapy a Second Career