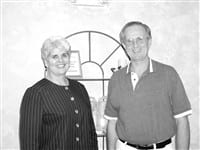 Some careers are just waiting to be stumbled upon. That’s a truth that John Hoime knows well.

For years, Hoime suffered with candida, an overabundance of yeast in the body, although he didn’t realize it, and neither did the doctors who prescribed a battery of medications, none of which seemed to ease his pain.

At the same time, a few years ago, his sister, Peggy Hoime, was working in Minnesota for a company called m’lis, which serves its customers by treating certain medical conditions, as well as excess weight, with herbs. John gave the program a shot, and after a regimen of herbs and fiber and a very limited diet — not an easy path, he admitted — the pain was gone.

That’s when he and his sister had the same thought: m’lis doesn’t have much of a presence in New England, so they started their own business, called Alternative Health, in Windsor, Conn. in April of 2000, and shortly after they expanded into Massachusetts with two more stores — in Southwick, where they now both work, and Southampton.

“It’s interesting,” Peggy Hoime said, “that sometimes in life, your passion develops out of your need.”

Indeed, the pair are believers in the m’lis all-natural herbal system, and they have seen steady growth as Western Mass. residents are turning onto the idea. For John, at least, it’s a matter of translating something that has changed his own life into a way of life for others.

Much of what the Hoimes do at Alternative Health centers around a healthy colon — perhaps not the most pleasant of subjects, but an area of the body that’s often neglected and, as a result, can lead to a battery of health problems. They claim that up to 95{06cf2b9696b159f874511d23dbc893eb1ac83014175ed30550cfff22781411e5} of all diseases may have some connection to colon health.

That focus on the digestive process might not be the first thing one thinks of when hearing the m’lis motto, “beautiful face, beautiful body, beautiful soul,” but the benefits of the program begin there.

Specifically, the Hoimes said, many people don’t realize how packed their large intestines have become with digestive sludge. Since most foods carry toxins of some kind, those toxins are allowed to remain in the body longer than they should, leading to sluggishness, weight gain, and other instances of poor health.

A one-week herbal cleansing regimen — which features three days of drinking nothing but lemon juice and maple syrup in addition to the fiber and herbs — every three months can clear the colon to such a degree that it matters little what someone eats in between, since the body disposes of it much faster than before, John Hoime said.

The cleansing alone generally leads to weight loss, the reason many people seek out the business in the first place. But when determining someone’s weight-loss needs, the actual weight isn’t the main concern; instead, the focus is on factors such as the percentages of fat and water in the body, which are determined using specialized electronic equipment. Both factors may be brought into ideal ranges through the program, the Hoimes said.

“Most people are dehydrated, and that also prevents toxins from leaving, and toxins attract fat,” John Hoime said.

He told the story of one customer who had her percentages read but wanted to try another weight-loss system she had already paid for. She returned to Alternative Health after two weeks seven pounds lighter — but found that she had actually gained five pounds of sheer fat while losing 12 pounds of water, both alarming developments. Alternative Health’s all-natural herbal approach, he said, is a better way to provide not only weight loss but proper balance in the body.

Besides the seven-day cleansing program and a more intensive, 30-day detoxification program, other services include niacin-based body wraps to increase circulation and reduce cellulite, and also herbal approaches to tackling fibromyalgia, candida, arthritis, and even acne. The business also offers cosmetic facial treatments and a product for menopausal women looking for a more natural way to balance their hormones than synthetic estrogen.

The results speak for themselves, the Hoimes say, pointing to a wall covered with testimonials. One is from a Boston man who had been sick since he was 9 years old. After six months of natural treatments for candida and fibromyalgia, he had been taken off 95{06cf2b9696b159f874511d23dbc893eb1ac83014175ed30550cfff22781411e5} of his medications and felt healthy for the first time in decades.
Changing Times

Stories like that have even convinced some doctors to refer patients to Alternative Health, but they’re not in the majority by any means. “I don’t fault them for that,” John Hoime said. “Their training is in pharmaceutical drugs. But we’re not anti-drugs — we know that at times you need to take medications.”

The problem, he said, is that, while drugs are tackling the symptoms of a disease, they’re also affecting other parts of the body. As a body’s natural immunity requires increased dosage, in many cases, the toxins being spread throughout the body increase. The herbal treatments in the m’lis program, on the other hand, are naturally occurring and don’t include stimulants.

“Insurance companies in Massachusetts still don’t cover such alternative treatments, but that might change someday,” Peggy Hoime said, “as evidenced by movement in other states toward coverage.”

Another change, also a gradual one, is the fact that more people are becoming aware of alternative treatments. But that’s a double-edged sword, John Hoime said.
“There are a lot of bogus remedies out there, and people may experience that and say, ‘none of it works. It’s garbage,’” he said. “If someone could lose weight just by taking a couple of pills each day, that would be wonderful, but if it’s that easy, it’s not real.”

“I think men have tended to believe this is a ‘woman thing,’” Hoime said. “We get a few men, but not as many as we should.”

But the program does work, he asserted, and provides all the nutrients and fiber the body needs while bringing its weight and water back into balance. It’s an entire lifestyle change, he said, as patients report feeling better, and not so sluggish, without craving caffeine or candy all the time.

“The best thing for me is watching people get well, when they sit here and say, ‘I feel good. I can play with my grandkids again and do all the things I used to do.’”

He’s not surprised at such a response. To this brother-sister team, it’s only natural.