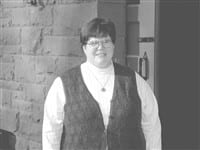 To hear Sr. Catherine Walsh tell it, there are almost as many different reasons to seek out Genesis Spiritual Life Center as there are people who seek it out.
She relates the story of a young woman who worked in a marketing firm. After the events of 9/11 shook her somewhat, she came to the Westfield retreat looking for some reflection — and a bit of guidance from within.

After a short time of focused prayer, the woman re-emerged into the real world with a new outlook on life — and a new career direction as a social worker.
“That sounds even more stressful,” Walsh laughed. “But she’s loving it. She said, ‘I found out what I needed to know, and now I love what I do.’ It’s nice to see that.”

The ability of the facility, operated by the Sisters of Providence Health System, to be all things to all people is one reason why it has thrived for 26 years as a center for holistic health, spiritual renewal, and simple recharging from the stresses of daily life.

And in a fast-paced world in which people don’t always have time to refocus, Walsh and the rest of the staff intend for Genesis to remain relevant well into the 21st century.

Walsh has been with Genesis for only a year, yet she’s only the second person to head the center. Sr. Elizabeth Oleksak, who was one of the original founders and the first director, stepped down from that post last year after 25 years, though she remains on the 14-person staff.

The center remains, as it was during the 1970s, a center of holistic health. That may not seem unique today, but such a focus 26 years ago wasn’t exactly in vogue, Walsh said, and that impressed her.

The opportunity to apply for the opening was brought to her attention by a friend who felt she would be a good match. Walsh agreed, particularly when it came to longtime aspects such as the center’s environmental consciousness.

At Genesis, environmentalism is more than grand ideas about the earth. It starts with small things, such as the absence of pesticides in the gardens around the facility, a change to more efficient lighting, and an emphasis on organic food in the kitchens, some of which is actually grown on site.

“We see how important it is to be environmentally conscious,” Walsh said.

As for the holistic side, that’s partly reflected in the programs offered at Genesis, from yoga and therapeutic touch to journaling, discussions of dreams, and seminars dealing with the lives of centuries-old mystics and how their examples are relevant today.

One-day programs range from watercolor painting and homeopathy to Scriptural journeys and examinations of shame in one’s life. Weekend retreats focus on topics such as Celebrating the Wisdom of the Creative Years, for women age 62 and older; an intensive journal-writing program; and bio-spiritual focusing.

Even one-day visitors may be led, if they prefer, in ‘focusing prayer,’ in which they learn to visualize the stresses and needs in their lives as an object outside of themselves and develop a sense of peace and renewal. “We help people deal with what’s happening in their lives,” she said.

The center’s commitment to social justice is evident in its participation in Ten Thousand Villages, a nonprofit organization that provides fair income to artisans around the world and sells their handicrafts in North America.

Whether a guest stays for a night, a week, or longer, small touches make a difference, from the quiet generally observed in the living areas to the window boxes outside the rooms — and the scissors left on dressers with notes encouraging guests to cut flowers for themselves. An outdoor pathway called ‘Compassion Curve’ features a number of stops at which walkers may read, write, or contemplate something.

The wide array of activities is mirrored by an equally wide range of people and groups who use the center, from the local Episcopal diocese on retreat to Firtion-Adams Funeral Home, which conducts bereavement classes there.

Genesis had been Sisters of Providence property since the 1920s, when a home for unwed mothers took root at the site. When the property became open for a different use, Oleksak and others posited the holistic health idea. Restored buildings still retain touches of the past, such as original wainscotting and a wooden relief from the original building that now hangs in the administrative wing.

The mission has remained very similar ever since the 1970s, garnering funding for the programs from guest fees, support from the health system for capital needs, and fund-raising in the community, which has always been successful.

Still, Walsh wonders why more people don’t realize the kind of work that is going on at the Mill Street campus.

“We’ve been around for so many years now, and I’m amazed at how many people either aren’t aware of us or don’t know what we do,” she said.
Of course, that only means there are plenty of people who will eventually discover Genesis.

Walsh tells of three people, all in their early 20s, who arrived for overnight visits last year — separately, but around the same time. One said she had driven past the campus every day but had never known what was inside. One felt like his life had him spinning, and he needed some renewal. Another was searching for some time alone for reflection.

All had different needs, and all found something of value. For many guests, it comes down to recognizing that there is something bigger than the daily grind — and there is peace to be found even amid that.

“It’s a matter of seeing God in all of creation,” she said, “and how valuable that awareness is.” 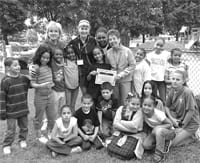 Off And Running Go FIT Foundation Provides Youths, Women With An Exercise In Healthy Lifestyles