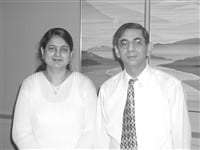 In many Asian and Middle Eastern countries, the energies of the mind and the body are as synonymous with health and well-being as pharmaceutical products are among Americans.

Slowly, however, the West is coming around to alternative pathways to health that thrive in the East. One couple who work at Wing Memorial Hospital in Palmer are carrying that message, one patient at a time.

Dr. Faiyaz Hakim and his wife, Shaheen Hakim, conduct meditation seminars and perform Reiki, a form of healing touch, on patients, respectively, as part of the hospital’s Integrative Medicine Department.

While the hospital has made an effort to expand their inclusion of holistic treatments, to the Hakims, their participation is simply an outgrowth of their own experiences being raised in cultures that value these traditions — he in India, she in Pakistan.

“I’d like to see even more growth,” said Dr. Hakim, who conducts his meditation seminars free of charge. “When I started the program seven years ago, I wanted to educate and spread the word. We’ve done that quite a bit, and people feel good about it, but there needs to be even more communication.”

As he and his wife told The Healthcare News, even in an age of major pharmaceutical advances, there are real benefits to be had by returning to treatments that have nothing to do with drugs.

Hakim, who is also an emergency room physician at Wing, credits a Pakistani grand Sufi master named K.S. Azeemi with training him in Muraqba meditation. Azeemi developed new modes of this skill and has turned his expertise into a successful chain of meditation services around the world.

In Muraqba meditation, Hakim tells patients to focus their minds on one point of energy — an imagined blue light — which they then perceive to fall on them and become absorbed into mind and body.

“The significant relaxation can help your health,” he said. “If you have a lot of stress in your life — and stress is a major factor in physical illness — this can work on the root causes of your concern.”

Eventually, issues such as high blood pressure, pain, anxiety, and depression may be eased through 15 to 20 minutes of daily concentration and meditation, he said.
“You will get distracting thoughts, but you should let them pass; don’t try to fight with them,” Hakim said. “If you do this daily, within three months, you’ll start to see the effects: a relaxed, positive attitude, self-confidence, less worry, and inner peace and satisfaction. You’ll be able to see both physical and mental effects.”

While the twice-monthly meditation sessions bridge the gap between physical and spiritual help, Hakim generally keeps the focus on physical well-being. The meditation itself lasts about 15 minutes, with the rest of the 45-minute session devoted to the discussion of patients’ day-to-day health issues, both physical and psychological, and the philosophy of the meditation exercise.

Hakim often refers to the light, the focal point of the meditation sessions, as God, but it can just as easily be seen as an energy field for those who have no concept of God. Either way, the idea is to fill the mind with positive energy, which translates into a positive attitude and an increase in mind power, which helps the body to fight against stress.

It was two years ago that Shaheen Hakim, who was raised in a culture of healing touch and was skilled in Reiki, decided to become certified in the art and introduce it to Wing.

Reiki is a form of healing and stress reduction accomplished by adjusting and redirecting the body’s energies through touch. The contact is kept to a minimum; what she aims to do is act as a channel between the patient and the universal energies she says flow around everything.

“It’s a universal life-force energy,” she said. “Reiki can be very helpful in different conditions, such as back pain, liver disease, and migraines. I put my hand on the patient and utilize the energies coming from the universe.”

Like her husband with meditation, Shaheen Hakim has conducted free Reiki programs in the surrounding community, trying to introduce people to something they may never have tried.

“We let them see how it feels afterward,” she said. “People tell me they feel relaxed and feel good.”

Wing takes these types of programs seriously, also featuring the services of a chiropractor, a massage therapist, and a yoga instructor as part of its integrated medicine focus.

And there is a desire for alternative treatment. Studies during the 1990s showed that although about 75{06cf2b9696b159f874511d23dbc893eb1ac83014175ed30550cfff22781411e5} of Americans had turned to some kind of holistic treatment, most didn’t tell their doctors about it. But the discourse between doctors and patients on holistic health is changing to some degree, and a program like Wing’s only serves to further legitimize concepts like meditation and Reiki, particularly when patients are referred from other departments.

Perhaps best of all, Dr. Hakim said, is that people don’t need to make drastic changes in their lives to improve their well-being through holistic health.

“You don’t need to buy expensive equipment, and you don’t have to change your lifestyle,” he said. “If you can donate 15 to 20 minutes a day in a quiet place in your home and clear your head, it will help you get rid of your unhealthy habits and negative attitudes.”

Best of all, patients are feeling so good after such therapies that some are getting off medications they had been taking for years.

“You really feel good about yourself,” he said. “If you have insomnia, you might see significant changes. If you’re struggling with drugs or alcohol and don’t know which way to go, this could help you too.”

In the end, he said, it all comes back to reflecting a culture in which the healing-touch and meditative arts are woven into the fabric of life. Americans have been slow to come around to such methods, he added, but those that try it for the first time in Palmer have been pleasantly surprised.

“We see people in pain, and we want to do something to help them,” Shaheen Hakim said. “It’s something I’ve had in me since childhood.”