The girl sits in her classroom and turns up the volume wheel on her hearing aid loud enough to hear her teacher. Suddenly, the classmate sitting next to her drops his book. She tries to turn her hearing aid down, but it’s already too late. A loud ‘bang’ echoes through her head, then ringing, and more ringing.

Decades later, Jen Sowards remembers exactly how moments like those — and hearing loss in general — felt.

She’s struggled with hearing loss for her whole life, although it wasn’t identified until she was 6 years old. Fortunately, technology in hearing aids continues to get better and better, and Sowards gets to be a part of the evolution.

Her life experience with hearing loss inspired her to become an audiologist, a career she has thrived in for more than 18 years. After spending more than a decade practicing across the country in Portland, Ore., she returned to the East Coast, where she worked at Clarke Hearing Center in Northampton for about a year. She has since opened her own practice at Florence Hearing Health Care and continues to help people who face the same daily struggles as she does.

“My own experience helped shape my philosophy for clinical practice now,” said Sowards, adding that her interactions with audiologists as a young child weren’t always positive. “I remember the audiologist just not necessarily taking a lot of time to explain things to me.”

Now, years later in her own practice, she takes ample time to explain to patients what she’s doing, why she recommends one type of hearing aid over another, and much more.

Dr. Deborah Reed, doctor of Audiology at Ascent Audiology & Hearing in Hadley, compares the human auditory system to a piano. The sensory nerve cells in the ear are like the keyboard, and their job is to stimulate the auditory nerve fibers.

“My own experience helped shape my philosophy for clinical practice now. I remember the audiologist just not necessarily taking a lot of time to explain things to me.”

To continue with this analogy, hearing aids are tuned to respond wherever the keyboard dysfunction is occurring.

“The bottom-line job of the hearing aid is to restore speech sounds and to improve our communication,” Reed continued. “We’re not necessarily looking to just give you a bunch of volume, we’re looking to give you clarity of speech, and we can do that by fine-tuning the digital processor of the hearing aids today.”

That’s a long way from the earliest hearing aids, which were hollowed-out animal horns in the 1800s. As technology continues to improve, more people than ever are able to receive custom treatment for their hearing loss — and more lives are being changed.

Beat of a Different (Ear) Drum

Now, Sowards no longer hears the ringing, and loud noises are no longer painful.

That’s because the hearing aids themselves automatically adjust the volume of sounds coming into them. If a sound is very soft, the hearing aid recognizes that and turns it up, and vice versa.

“They really came a long way to where, by digitizing that signal, they were able to have an automatic volume control,” she said, adding that a hearing aid is a lot like a mini-computer. “Being able to automate the volume control on those really made a big difference.”

This is just one way in which modern-day hearing aids have improved. From those initial hollowed-out animal horns, hearing aids evolved to giant battery packs strapped to a person’s chest. A lot of variations have followed — with the past decade in particular seeing a notable burst of progress.

Sowards was fit with just one hearing aid when she was identified with hearing loss as a child. Since then, research has shown that the brain processes sound a lot better when hearing clearly through both ears.

“What we know about people with hearing loss is they tend to be older and might be more isolated. We’re trying to keep them safe and independent.”

“The prevailing thought at the time was, ‘well, if you can hear with one ear, that’s probably good enough,’” she said. “But if you can hear well out of both ears, you tend to have much better processing for speech when there’s competing background noise, and you also have much better localization skills, or the ability to tell what direction the sound is coming from.”

To achieve this, the patient must first be fit with the right hearing aid. They come in myriad types and sizes, but the ideal match depends on their ear anatomy and severity of hearing loss.

“In a perfect world, we would want to fit the best technology with everybody, but we can’t always do that,” said Reed, adding that fitting hearing aids to people is very much a case-to-case basis. “Then, we have to make judgment calls around quality of life and need.”

For example, someone who is a manager working full-time attending events and interacting with people on a daily basis will want a hearing aid that can process noise much better. On the other hand, someone who works in assisted living might not need all the fancy features.

One of the more recent developments is fall detection. If a person falls, Reed said, some hearing aids now have the ability to detect that fall and issue an alert. If the person does not respond and cancel the alert, a message is sent out to an emergency contact list.

“What we know about people with hearing loss is they tend to be older and might be more isolated,” she explained. “We’re trying to keep them safe and independent.”

Another feature is the ability to Bluetooth hearing aids to a smartphone. Apps allow a person to adjust the settings of their hearing aid and pin that location, so the next time they go there, the hearing aid will adjust to those saved settings automatically.

Hearing aids are also rechargeable, whereas years ago, batteries needed to be replaced. Sowards says most hearing aids now last 20 to 21 hours before needing to be charged again.

Not every person with hearing loss needs hearing aids, but for those that do, plenty of technology is available to support their needs.

“We’re really fortunate today in that technology is amazing,” Reed said. “The digital processing available in hearing aids has never been faster or more accurate.”

The effects of untreated hearing loss can be startling. An estimated 36 million Americans have some sort of hearing loss — that’s 17% of the adult population.

Unsurprisingly, the incidence of hearing loss grows with age; however, hearing loss is growing in teens as well. According to the Hearing Loss Assoc. of America, an estimated one in five American teens experiences some degree of hearing deficit. Meanwhile, 12.5% of kids between the ages of 6 and 19 have hearing loss as a result of listening to loud music, particularly through earbuds at high volumes.

And the effects go beyond the ears. Studies show that those with hearing loss show significantly higher rates of depression, anxiety, and other psychosocial disorders. Hearing loss has also been associated with decreased social and emotional communication and cognitive function.

When it comes to teens with hearing loss due to loud music, Sowards says two factors are hugely important: the volume of the music and the time the ears are exposed to the sound.

She compares the fine hair cells in the ears to a green lawn. “If you walk across it a couple times, those blades of grass spring right back up, and it’s no big deal. But if you and 20 of your friends walk that same path eight hours a day, you’re going to get a bare patch.”

The simple solution: be careful with how loud and how often you listen to music. “If it’s loud and constant, that’s when you start to see the damage,” Sowards said.

Reed gave another analogy: exposure to sunlight. Limiting the duration of loud sounds is similar to putting on sunblock or avoiding long stretches of exposure to harmful UV rays.

“It’s okay to listen to music a little louder when you’re working out or something, but make sure you’re turning it down when you’re hanging out reading or doing homework,” she said.

Signs a person may be experiencing hearing loss may include muffled speech and other sounds and difficulty understanding words, especially with competing background noise.

When experiencing symptoms like this, Reed said it’s important to visit an audiologist to get a baseline hearing test sooner rather than later. “What we know now that we didn’t know seven or eight years ago is that the sooner we start treating hearing loss, the better we do.” 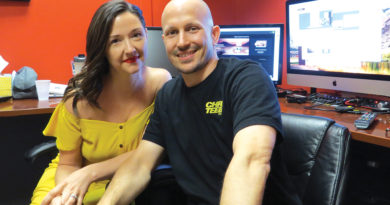 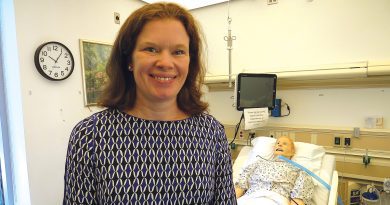