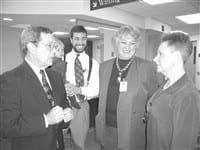 That’s how she described the $2.2 million project to renovate and expand Baystate Health System’s Adult Internal Medicine Clinic and Pediatric Clinic into a state-of-the-art facility now known as the High Street Health Center.

Baystate staged an open house for the center on Nov. 13, an event that capped nearly two years of planning and renovating of facilities housed in the former Wesson Memorial Hospital on High Street. That building, owned by Baystate since the mid-’70s, was sold in 2000 to the South Campus Group, LLC, which made consolidation and modernization of Baystate’s two clinics its first priority as it prepares to market the building for office use.

Indeed, Baystate’s facilities now occupy about half the space they did two years ago, but they are much more efficient and convenient for both patients and staff, said Provost, who offered The Healthcare News a tour of the center. Comparing the present with the past, she said the new facilities, while obviously more modern, were designed with patient convenience in mind.

The old space, as she described it, was spread out over several floors of the old hospital and therefore inefficient. It was also outdated and in some ways impractical. The pediatric clinic, for example, was located in an inpatient section of the hospital, and thus was not open and easily accessible.

The new clinics, arranged in a pod format, were designed with input from staff, said Provost, and then simulated on a computer for testing to make sure that they worked effectively. “We did a great deal of planning on these two clinics,” she explained. “We got a lot of input upfront so we could clearly understand everyone’s needs.”

As an example, she pointed to the facility’s central records area. Once housed in a small, windowless room with one desk shared by several staff members, the new facility is twice as large as its predecessor and is designed with easy access to files — and staff comfort — in mind.

“They told us what they needed,” said Provost, referring to the records facility employees, “and we designed the new space accordingly.” The same method was applied to the center’s examination rooms, waiting areas, pharmacy, and offices for the dozens of physician residents who work at both clinics.

Both the adult and pediatric clinics were designed to improve patient flow and decrease wait times, said Provost, who told The Healthcare News that between them, the clinics see about 50,000 patient visits annually.

More than 200 guests turned out for the open house, an event that featured a ceremonial ribbon cutting by Springfield
Mayor Michael Albano. 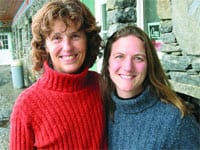