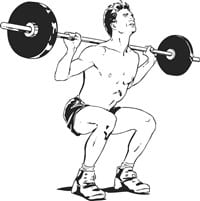 Total physical activity, including various types of exercising, such as running, walking, and weight training, are associated with a reduced risk of heart attack or death from coronary heart disease (CHD) in men, according to a Boston-based study published in the Journal of the American Medical Association (JAMA).

That’s nothing surprising. But, more importantly, the study emphasizes the value of high-intensity exercise over less-strenuous types of activity.

“We all know that physical activity is good for heart disease. This is the first time we’ve shown that intensity of exercise over and above the amount of energy expenditure makes a difference,” said Dr. Frank Hu, senior author of the study and an associate professor of nutrition at Harvard School of Public Health.
“If the exercise is suitable for the person, I think people should aim for more rigorous exercise given the amount of energy expenditure.”

In other words, he said, if someone can burn the same amount of calories by walking for an hour or running for half an hour, running is the better option — and the analogy holds across many forms of exercise.

According to the report, multiple studies have shown that there is an inverse relationship between physical activity and risk of CHD. Sedentary individuals have almost twice the risk of CHD as those who do high-intensity exercise, but the optimal level of exercising for preventing CHD is unclear.

Dr. Michaela Tanasescu, now with Loma Linda University in California, worked at the Harvard Public School of Health in Boston when she and her colleagues assessed the amount, type, and intensity of physical activity in relation to risk of a first-time myocardial infarction (heart attack) or death from CHD among men.

The researchers studied a group of 44,452 men enrolled in the Health Professionals’ Follow-up Study, an analysis of professionals in the health care field (dentists, optometrists, pharmacists, podiatrists, osteopaths, and veterinarians) who were tracked at two-year intervals from 1986 through 1998. Every two years, participants were asked on a detailed questionnaire about potential CHD risk factors, diagnosis of CHD, and types of physical activities.

The researchers documented 1,700 new cases of CHD. They also found that total physical activity, running, weight training, and rowing were each inversely associated with risk of CHD.

“It&#146;s reassuring news,” echoed Dr. Erica Jones, assistant professor of Medicine at Cornell Medical College and a cardiologist at New York-Presbyterian Hospital. She explained that some cardiologists have been wary in the past of recommending weight training for heart health.

The researchers also found that a half-hour per day or more of brisk walking was associated with an 18{06cf2b9696b159f874511d23dbc893eb1ac83014175ed30550cfff22781411e5} risk reduction for CHD and that walking speed was related to the risk reduction, as reflected by the inverse association of walking pace and overall exercise intensity with CHD incidence.

Overall, Jones said, the study is valuable because “it analyzed what people were actually doing,” rather than setting up a situation in which subjects were given a researcher-imposed exercise regimen.

The physically active men in the study also tended to have lower body-mass indices, lower total fat intake, higher intake of fiber and alcohol, and lower incidence of smoking and high blood pressure — and Jones pointed out that people who exercise regularly may generally take better care of themselves.

However, she cautioned that it was not a randomized study, and that it was conducted in a very homogenous population — male health professionals. While homogeneity can be a good thing, limiting the variables that can affect results in a complex study, she explained, it can also limit the extent to which the study can be generalized.

Still, the authors placed great weight on the findings.

“Our study confirms a significant inverse dose-response relationship between total physical activity and risk of CHD,” they wrote. They stressed the value of allowing people to make changes to their health outlook by engaging in the sorts of activities they may undertake regularly anyway — only doing them differently.
“This certainly demonstrated the enormous potential for exercise in lowering the risk of heart disease,” Hu said.

Information for this article was made available by the American Medical Association and New York-Presbyterian Hospital.

AnnualRun and Walk for a Noble Slated for May