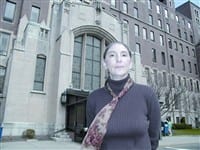 When SARS first showed up in Massachusetts late in March, anxiousresidents watched doctors address the issue on TV.

Then they flipped to the international news and saw images from Asian countries of pedestrians wearing surgical masks — and heard of a rising death toll from this new, particularly virulent outbreak. And they worried.

To date, however, SARS — which stands for severe acute respiratory syndrome — has not had that kind of impact in America. But it certainly hasn’t run its course, either, and doctors worry that something worse could emerge at any time as the interconnectivity of the global village grows more complex.

But that interaction has also proved to be a benefit in countering the unknown, said Robert Hoffman, chief of Infectious Diseases at Mercy Medical Center, simply because physicians from across the globe are communicating on a constant basis — and that will lead to a quicker understanding of how SARS and developments like it can be treated and perhaps eliminated.

There have been some breakthroughs already. In mid-April, scientists in the Netherlands confirmed the identity of the virus that causes SARS, infecting monkeys with the suspected coronavirus and finding that the animals developed the same symptoms that humans do.

“It’s incredible to me that a disease that was unknown two months ago might be totally analyzed with diagnostic testing and therapy in such a short time,” Hoffman said. “That’s an incredible testimony to what medical science can do when there’s worldwide cooperation.”

At the same time, he said, a failure by officials in China, where SARS originated, to let the world community know about the disease when it was first detected has no doubt contributed to its rapid spread. Meanwhile, overuse of antibiotics, not only in humans but in animals, has been a factor in allowing these super-germs to thrive.

There are plenty of factors in what has happened — and is still going on — with SARS, and plenty of lessons doctors can take from the experience. This month, The Healthcare News delves into some of those.

By now, the characteristics of SARS have been well-documented. It typically begins with a fever greater than 100.4 degrees Fahrenheit. Other symptoms may include headache, an overall feeling of discomfort, and body aches. Some people also experience mild respiratory symptoms. After two to seven days, patients may develop a dry cough and have trouble breathing.

At press time, SARS had killed 159 people around the globe — none in the United States — while infecting thousands in 23 countries. One of the factors in its spread is what the media has dubbed ‘globalization.’ That term refers to the way 21st-century people reach other continents and touch far-off civilizations within hours. That’s a ready recipe for a disease outbreak, as SARS has demonstrated.

After its debut in China late last year, the disease has cropped up from Singapore to Toronto, from Hanoi to Springfield, where doctors at Baystate Medical Center picked up on a few possible cases at the start of April.

“In order to meet the definition of a suspect case, you have to have a certain set of symptoms and also contact with another presumed case or travel to Southeast Asia. Screening for recent travel to that area is really a key factor in determining whether somebody has been exposed to the virus,” said Dr. Donna Fisher, assistant professor of Pediatrics at Tufts University School of Medicine and a member of the Division of Pediatric Infectious Disease at Baystate.

In Baystate’s case, the family possibly affected by the disease had recently traveled to the area of China thought to be the birthplace of SARS, and the time frame after that visit was right for a positive match. Still, no final determination had been made at press time.

To date, scientists aren’t even quite sure what SARS is, although scientists at the British Columbia Cancer Agency in Vancouver recently sequenced the genetic code of the virus suspected of causing the disease. They reported that the gene sequence suggests a previously unknown coronavirus unrelated to any known human or animal viruses. That development led to the Netherlands finding the following week.

Early on in the disease’s worldwide spread, organizations such as the Centers for Disease Control (CDC) and the World Health Organization tested for the usual suspects, such as influenza and other known bacterial and viral causes of pneumonia; all came up negative. Then a virus related to measles, mumps, and other diseases emerged as the possible cause, but that too was eventually ruled out.

It’s possible, researchers said, that the damage is actually caused by the body’s immune response. When the immune system attacks a bacterial or viral infection, it sometimes kills healthy cells along with the microbes.

Whatever the case, the CDC reported, “preliminary studies suggest that this virus may never before have infected the U.S. population. Certainly, it has not circulated widely in humans. Presumably, this virus originated in animals and mutated or recombined in a fashion that permitted it to infect, cause disease, and pass from person to person.”

And that’s where globalization comes in. Hoffman said many new coronaviruses begin as animal pathogens that make an inter-species jump, an especially common occurrence in China, where farmers live in much closer proximity to their animals than American farmers do.

In the past, a new disease that made the jump to humans might infect an entire village, but that’s it. Today, it’s a whole new — and much smaller — world.

“If people who are sick keep insisting on flying, then that poses a new threat, and it gives a new meaning to the word ‘globalization,’” said Lim Hng Kiang, Singapore’s health minister, at a recent news conference about SARS. He spoke specifically of a Singaporean woman who fell ill on a business trip to Hong Kong and Beijing, then went home — possibly infecting fellow airplane passengers, airport immigration officials, and her taxi driver in the process. They, in turn, probably infected others, and away the disease went.

That pattern has been repeated countless times, infecting thousands of people worldwide and killing hundreds — so far. Yet Hoffman, Fisher, and others are encouraged by the rapid progress in identifying the disease and working toward a treatment, advances that would not be possible without close communication between world health officials — the globalization of information, as it were.

“The best thing health care providers can do right now is to stay informed and follow the information that’s being sent out by local and state health departments, as well as the CDC,” Fisher said. “Here at Baystate, we were able to mobilize quickly, partly because we were keeping abreast of what information we had at the time when a suspected case needed to be evaluated in the hospital.”

That’s the sort of awareness that health professionals can never abandon, Hoffman said, particularly given the way diseases can spread in the modern world. Some other modern developments, including the overuse of antibiotics, are giving super-germs an extra advantage, he added.

But it’s not just overuse in humans, he explained. Livestock are being raised closer together than ever before, and illness that spreads throughout the entire group is a constant danger, Hoffman said — and that’s not even taking into account the ethical questions of the way animals are kept. To combat the possibility of disease, animals are therefore loaded up with antibiotics.

In the case of poultry, a type of animal from which viruses sometimes make the leap to humans, this dependence on antibiotics can eventually render the drugs less effective — and make the inevitable diseases more severe.

The possible result? “A virus could have all the virulence of influenza, but in a bird strain no one’s ever seen before and no one has any immunity to,” Hoffman said. “We are worried that a new strain of something like influenza can jump from poultry to humans and be devastating.

“This is evolution,” he added, “occurring right in front of our eyes.”

That in itself is nothing new, he added; now, however, the disease can affect the whole world quickly, not just a village, as in past centuries. Fortunately, scientists are also able to follow the progress of something like SARS simply by retracing the movement of individual people. “We can track the first, middle, and last names of those who have spread it from Hong Kong to Toronto, or from China to Frankfort.”

If anything, Hoffman said, it was the initial reluctance of the Chinese government to relate the nation’s problem to the rest of the world that has caused as many problems as any other factor related to SARS.

“They were quiet about it for five months,” he said. “That’s what happens when political agendas get in the way of public health — they screwed it up and made it worse. Something that could have been stopped before New Year’s is now a worldwide problem.”

Fisher said area hospitals have all developed strategies to respond quickly to a SARS threat and protect their workers and the community at large. It’s not dissimilar to the way institutions have discussed plans for bioterrorism attacks, even though SARS is not thought to be terror-related.

“At this point, we have to treat cases as what they might be, and protect patients, visitors, and health care workers,” she said. “We’re not just scrambling around here, wondering what to do. We’re looking at the recommendations of the CDC and giving our employees the sense that we know how to handle these unusual and emerging diseases, and that we will protect the health care staff.”

Air travel is way down to Far East destinations, but so far, health organizations are only recommending postponing trips, not clamping down on travel. As the speed with which people can make contact across the globe increases, the main question is whether scientists and doctors can muster the same speed in combating the 21st-century health threats that emerge, said Julie Gerberding, director of the CDC.

“Speed of scientific discovery and speed of communication are hallmarks of the response to SARS and reflect amazing achievements in science, technology, and international collaboration,” Gerberding wrote in an April issue of the New England Journal of Medicine.

“However,” she continued, “despite these advances, a very sobering question remains — are we fast enough?” 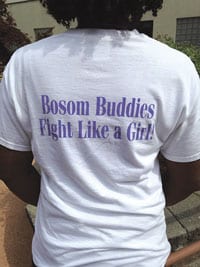 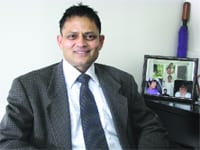