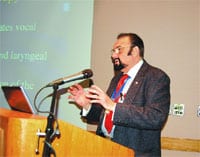 Dr. Gregory Gallivan knows the value of the voice.

An opera singer in his spare time, Gallivan has performed countless surgeries to treat throat cancer, often resulting in the total or partial loss of the larynx — and the patient’s voice.

“The usual treatment for cancer of the larynx has been either surgery to remove it, treating it with radiation therapy or chemotherapy, or some combination of the above,” said Gallivan, a thoracic surgeon at Mercy Medical Center.

That’s particularly true for advanced cancer — perhaps a large growth in the voice box that has spread to the lymph nodes. “That can require either major surgery or removal of half the voice box — a hemilaryngectomy — or a total laryngectomy, plus a radical neck dissection, taking all the lymph glands out of the side of the neck,” he said. “That’s sometimes combined with radiation and chemotherapy.”

Even mid-level and early-stage throat cancer often requires surgery or other invasive treatment, which is why a breakthrough, developed over the past decade, is so exciting to Gallivan.

It’s called a KTP (potassium titanyl phosphate) laser, and it has the potential to avert the trauma of throat surgery in many cancer patients — and help them retain the full use of their voice.

“Not all lasers are alike,” Gallivan told The Healthcare News. “The KTP is a solid-state laser, as opposed to a gas laser. If we use this laser in a pulsed fashion — instead of continuously, so there’s time for tissue cooling between each laser pulse — in a very early cancer of the larynx, when it’s confined to the vocal cords (or vocal folds, as throat surgeons refer to them), that can be the main method of treatment, and you may not need to have radiation therapy or undergo major surgery.”

In a successful KTP procedure, the pulses of laser light destroy the tumor selectively, without damaging healthy vocal folds. The technique was originated by Dr. Steven Zeitels, professor of laryngeal surgery at Harvard Medical School and director of the Voice Center at Boston’s Massachusetts General Hospital, who adapted the technique from his work using the laser to treat non-cancerous lesions on the vocal cords.

“The KTP laser has been used in various forms for the past 20 years, but this procedure is based on the work of Steven Zeitels, who is my mentor and an absolutely brilliant guy,” Gallivan noted. “He said that, if we can use it for pre-cancerous lesions, we can use it for cancerous lesions in the early stage. We can hopefully treat it without resorting to further surgery, radiation, and chemotherapy, and we can preserve the voice.”

Laryngeal cancer isn’t as common as other cancers — about 200,000 Americans are affected at any given time, and 12,500 new cases are diagnosed each year, while close to 4,000 people die annually from the disease.

Risk factors extend from the obvious, smoking (death from throat cancer is about 20 times higher for heavy smokers than for non-smokers), to excessive alcohol consumption and history of head, neck, or lung cancer; and age. It afflicts more men than women.

Symptoms of throat cancer depend on the size and location of the tumor, but may include hoarseness, voice changes, a lump in the neck, sore throat, persistent cough, earache, or bad breath. The cancer may develop in any part of the larynx, and can spread to adjacent tissue, the lymph nodes, and the lungs.

For about 40 years, doctors — including Zeitels — have used lasers to treat non-cancerous lesions and growths in the larynx. He first applied the same treatment to malignant tumors when John Ward, a professor at Northwestern University, approached him in 2002 after learning of cancer in his vocal cords.

Zeitels used a concept promoted by Dr. Judah Folkman of Harvard Medical School, who posited that physicians could destroy tumors by stopping angiogenesis, the process whereby they create new blood vessels on which they feed. Zeitels argued that pulses of laser light could destroy the tumors and their blood vessels without significantly burning the vocal cords themselves, or leaving scars that could damage the vibration necessary for voice.

“Any cell in the body can become cancer,” Gallivan told The Healthcare News, “but it’s still a part of you. And cancer only lives as well as its blood supply. If you can interrupt the blood supply to the cancer without killing off normal tissue, that’s what you want to do — and that’s the way the pulse KTP laser works.”

Zeitels treated Ward successfully; his tumors eventually disappeared, and his voice regained most of its strength. Zeitels later reported the results of 22 more procedures, announcing that every patient was cancer-free for at least two years following the laser treatment, without removal of vocal cords or loss of voice quality.

At the same time, Gallivan learned the procedure working with his mentor, and brought it to Mercy. They remain, as far as Gallivan knows, the only two surgeons in Massachusetts using the KTP laser to treat laryngeal cancer.

The catch, of course, is that the cancer must not be too advanced to be treatable with the KTP laser, which means it needs to be detected early. For that, Gallivan relies on a diagnostic tool called — get ready — a strobovideolaryngoscope. It’s basically what it sounds like: a strobe light and video camera that’s sent into the larynx via the mouth or nasal cavity.

Once there, it measures the rippling mucus.

“The surface of the larynx is covered with mucus, which is like waves when the air puffs through,” he said. “We can see whether the waves are stiffening on one side or there’s an absence of mucosal waves. Maybe we’re not seeing nice, rhythmic, symmetrical waves, like an ocean. It’s irregular in some way, even though we don’t necessarily see an obvious growth.”

The idea, then, is to notice the slight changes in one’s voice that would trigger a trip to the doctor. Gallivan — who is trained in airway reconstructive surgery but is also a voice specialist — might order up the laryngoscope.

“There might be harshness, scratchiness, ‘I just don’t sound like myself today,’” he said. “Singers and actors notice this, but other professional voice users often don’t think about it — people like schoolteachers, radio and TV personalities, telemarketers, and business people who give lectures … anyone who has to be able to talk to work.”

Thanks to an innovative laser treatment, more people are keeping that voice strong.