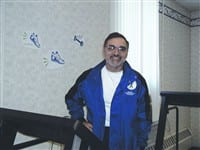 Vinnie Spanilo wanted to make it clear that an organ transplant is not a cure. “It’s a trade-off.”
Spanilo, who was given a new lung in November of 2000, said that operation will hopefully give him many more years to live and enjoy his family. But it will not be life as the Enfield, Conn. resident knew it before he was diagnosed with pulmonary fibrosis, an incurable lung disease, in 1996.

Indeed, Spanilo’s immune system — like that of everyone who undergoes a transplant — has been substantially weakened, and it must stay that way in order to ensure that his body won’t reject its new organ. Thus, he is extremely vulnerable to any type of infection and must take extraordinary measures to keep himself out of harm’s way.

He doesn’t shake hands when he greets people, for example. He can’t mow the lawn, must use a separate shower in his home, and must be extremely careful when visiting others in the hospital — something he does frequently in his new role as roving ambassador and motivator. Meanwhile, he has a fraction of the lung capacity he had years ago, and there are some things — not many, mind you — that he simply can’t do.

But this is a trade-off that Spanilo will gladly accept. He was given six months to live after being diagnosed with pulmonary fibrosis, and the fact that he lived long enough to receive a new lung is considered nothing short of miraculous.

It’s a feat that he and his doctors attribute to the rigorous rehabilitation regimen that Spanilo undertook in the years prior to his transplant operation. Those workouts, designed with the help of staff at the Weldon Rehabilitation Hospital, included countless miles on the treadmill, untold steps on the stairmaster, hundreds of jumping jacks each day, and lifting jugs of laundry detergent at home to tone his muscles.

Those workouts enabled Spanilo to leave transplant surgery without a breathing tube, something that had never been done before to anyone’s recollection. Similar work is now enabling him to again defy the odds and not only survive — which many transplant recipients don’t — but regain more lung capacity than his doctors thought possible.

And today, Spanilo is turning his powers of determination in another direction. He has his sights set on the upcoming Transplant Olympics in Florida and the table tennis competition. The sport is new to him — he’d rather play basketball, but that’s not possible with one lung — and the competition will be stiff.

But those who know him wouldn’t bet against him in anything he ventures into. Doctors and physical therapists at Weldon have worn out the word ‘amazing’ to describe what he’s done so far and say his story is a testimony to the triumph of the mind and body over adversity.

The Healthcare News talked with Spanilo recently about his ordeal and the lessons he believes are there for others.

Spanilo says he was preparing for his transplant operation as if he was training for the real Olympics. At the same time he was lifting bottles of detergent, however, he was also putting together a list of pallbearers for his own funeral.

While death wasn’t something Spanilo dwelled on — “I was always thinking about ways to keep living, not ways to die” — that is the reality for most people diagnosed with pulmonary fibrosis, a condition in which white blood cells, in essence, try to attack the lungs. Statistics show that only a small fraction of those who contract the illness are able to survive.

Spanilo apparently contracted the disease due to exposure to hydrocarbons from his work as a fuels logistician with the government. He first felt that something might be wrong in the summer of 1996 when he experienced a persistent dry cough and, later, a shortness of breath. When he took his daughter to a local ambulatory center to have her hand X-rayed after it was caught in a car door, he asked doctors to check him out as well.

X-rays revealed bilateral pneumonia, but doctors suspected something far worse, he said. A biopsy confirmed pulmonary fibrosis, a condition with a very high fatality rate, one which leaves most of its victims with two to five years to live after the disease has been detected. For Spanilo, the clock was much shorter — about six months — because he was diagnosed with end-stage pulmonary fibrosis, and the honeycombing of his lungs was much more pronounced.

While his doctors were can did with Spanilo about his odds for survival, he was determined, in his words, not to deny the illness, but to defy it. “My objective was to get to a state of wellness even though I had a disease,” he said. “To do that, I had to work on the mind, the body, and the spirit.”

And to reach that point, he decided to use any and every means at his disposal, from the treadmill to herbal remedies, from experimental drugs to prayers. He kept it all in a journal — one of the requirements set down by a massage therapist who treated him — and even put together a book with the names of everyone who agreed to pray for him.

“You try to remain open to everything but attached to nothing,” he said of all the healing options out there.

Spanilo told The Healthcare News that part of the transplant trade-off is enduring the wait for the organ. Many people don’t survive that wait, he said, especially those who need lungs. That’s because there is great demand for those organs — one-third of all illnesses are respiratory-related — and because lungs are so delicate. Nearly 80{06cf2b9696b159f874511d23dbc893eb1ac83014175ed30550cfff22781411e5} of those that are donated are unusable.

Spanilo’s wait for a lung was nearly four years. His doctors didn’t think he would live six months. He credits his survival abilities to his strong will, but also to an exercise regimen that would be beyond the capabilities of many healthy individuals.

“I was doing 500 stairs a day and 1,500 jumping jacks a day, and I was walking for an hour a day,” he said, adding that as his conditioned worsened, it became more difficult for him to exercise — he was eventually put on oxygen — but he knew that he had to in order to survive.

“I was trying to stay in shape as much as possible,” he said. “But the more I exercised, the more I coughed. Sometimes, when I exercised I put myself over the threshold and I couldn’t breathe … it was like someone was holding my head under water.”

With the assistance of Weldon respiratory therapist Donna Hawk, Spanilo went on a program designed to help him stay in shape but not push his body over the limit.

“We matched his exertion during exercise to his oxygen needs to make sure that his levels were OK and that his heart rate was acceptable,” Hawk explained, adding that Spanilo was easily the most motivated person she’s ever worked with. “We just had to make sure he was exercising in a safe manner. Once we had that down, he was off and running.”

While the physical conditioning was only one component of the strategy Spanilo employed to survive until a lung became available, he believes it was the key not only to being healthy to receive his new lung, but also to rebound quickly after that operation, without the need for a respirator, and to achieve a high quality of life after the operation.

Spanilo told The Healthcare News that while he received the left lung from the organ donor, the person who received the right one, who was exposed to the same hydrocarbons and was 10 years younger than Spanilo, died two weeks after his transplant operation.

“This led me to believe that a lot of the things that I did helped,” he said. “People ask why I lived and some others didn’t … I think part of the answer lies in all the hard work I did to prepare my body and my mind.”

Today, Spanilo spends a great deal of time talking with transplant survivors and those waiting for organs. He said he talks often about the trade-off aspects of transplant surgery and the need for people to keep working after they’ve received their organ.

“A lot of effort goes into simply getting a transplant,” he said, “and not on keeping in shape before or after the operation.”

Next on Spanilo’s challenge list is the Transplant Olympics in June. He’s been working hard on his skills in table tennis — a sport much different from the Ping-Pong that individuals play in their basements — and is currently training with one of the top players in the world.

That hardened focus is similar to the mindset he developed when staring down transplant surgery. He isn’t preoccupied with winning, necessarily, but with preparing himself as best he can.

Spanilo said that after his transplant operation, he introduced his new lung to the rest of his organs in an effort to promote peace and make the difficult transition that much smoother. This is part of the power of positive thinking, he explained, adding that one shouldn’t sell such exercises short.

Nor should they overlook those exercises designed for the body, he said, adding that the total package put him a position to accept the trade-off that many thought he would never live to experience.

Editor’s Note: Those who would like to help Spanilo and the Connecticut team get to the Transplant Olympics (the cost for the entire team is $50,000) can send checks to the National Kidney Foundation Transplant Olympics for Vinnie Spanilo: 929 Farmington Ave., West Hartford, CT 06107.