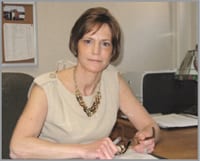 Walking a floor at Baystate Medical Center, you probably wouldn’t have any idea which patients are most at risk for falling down and injuring themselves.

But the doctors and nurses do, just by glancing at a doorway.

“Every patient admitted to the hospital has a risk assessment done, usually by the admitting nurse, to identify patients who appear to be at the highest risk of falls, because they’re either cognitively impaired, weak, or have a specific medical problem or visual impairment,” said Dr. Maura Brennan, director of Baystate’s Geriatric Fellowship Program and medical director of Hospice.

“That becomes part of the patient’s permanent record and care plan,” she continued. “And the patient’s room is identified by a symbol which the staff recognizes, indicating that the patient is a fall risk, so there’s heightened vigilance for those folks without putting a sign out saying, ’watch Mrs. X; she’s fallen.’ So the staff understands what’s happening without violating anyone’s privacy.”

Mercy Medical Center also posts a visual cue outside patient rooms, along with a color-coded wristband, noted Maureen Lanzoni, the hospital’s director of Nursing Systems, who oversees a falls committee to evaluate and improve this aspect of patient safety.

But the effort to prevent serious injury has several other layers, Lanzoni said. “We take falls very seriously. It is the number-one preventable adverse event in hospitals today.”

Her committee meets every other week to review every fall that has occurred in the building. “Many hospitals are moving toward that,” she explained. “Back in the day, you just counted your numbers, but this committee has really been focusing on preventing falls with injury.”

From those efforts has emerged a comprehensive regimen for assessing patient risk and taking steps to lower the potential for injury. “Some patients are automatically at higher risk because of medical instability, or they may have poor gait after surgery and anesthesia, or they’re taking certain medications” that could compromise mobility, she told HCN. “And, certainly, there is the change in the environment, waking up in an unfamiliar hospital room. We look at all these risk factors to determine what we can do to prevent falls.”

Falls —and how to prevent them — are a hot topic in hospitals these days, not to mention long-term care facilities, visiting-nurse organizations, home-care agencies, and other health venues.

“I think there’s increased attention for a number of reasons,” Brennan said. “One is the aging of the population. Second — and not just at Baystate, but at most good, modern hospitals — there’s been a growing awareness of the need for systems and processes to guarantee patient safety and quality in general.”

Much of the current thought on the issue, she said, can be traced back to a pair of landmark reports by the Institute of Medicine: 1999’s “To Err Is Human,” which suggested that tens of thousands of patients were dying each year because of medical mistakes, and its 2002 followup, “Crossing the Quality Chasm,” which delved further into how to improve quality of care and patient safety. “That helped to initiate a shift in the way people thought about events that had previously been conceptualized as unavoidable.”

The third factor, Brennan noted, is that “hospitalizations have grown shorter, and patients admitted to hospitals are significantly sicker and frailer than in the past. Some patients who would have been admitted 10 years ago won’t make it into a hospital bed now. So it’s easier to understand why things like falls, hospital-acquired infections, and adverse drug events are all getting timely attention.”

For this issue, HCN talks to several area health care providers about why fall prevention has become such an important topic — and why the outcomes are improving.

That initial risk evaluation isn’t limited to hospital patients. Sue Pickett, an RN and executive director of Mercy Home Care, said her staff also performs a fall assessment on each new patient. “If they score above a certain amount, they have a physical-therapy referral,” she explained.

Also, “on our initial assessment, we go through the entire house and address safety issues — are there scatter rugs on slippery surfaces, do they need any adaptive equipment? … things like that,” Pickett said.

Falls have long been a bane of older adults. According to the Centers for Disease Control and Prevention, every year, one in three adults age 65 or older falls. Those falls result in close to 600,000 hospitalizations each year — and about 20,000 deaths.

Recognizing those statistics, the home-care industry takes falls seriously, Pickett said, and considers them an important outcome to report to regulatory bodies. “We did a lot of training with the nurses and therapists to come up with the fall-risk assessment. There has been a lot of back and forth, a lot of education.”

“The population is getting older,” she continued, “and you’re going to see more and more of these efforts, because people want to stay at home as opposed to being placed in a long-term care facility.”

The VNA & Hospice of Cooley Dickinson takes its fall-prevention message into the community through a grant-funded program called Strength in Numbers, which is essentially a six-week series of classes for seniors, typically conducted through senior centers or councils on aging. The effort has run for several years, and this spring has featured classes in Easthampton, Northampton, Hadley, and Granby.

“We’re assessing fall risks and teaching exercises and showing how to make your home more safe, how to identify what medications put you at greater risk for falls, that sort of thing,” said Priscilla Ross, director of business development for the agency.

According to John Yount, physical therapist and falls prevention coordinator for the Cooley Dickinson VNA & Hospice, “when we looked at statistics on falls in Western Mass., it was higher than the state average. And we know that about 30{06cf2b9696b159f874511d23dbc893eb1ac83014175ed30550cfff22781411e5} of older adults fall every year. The costs associated with that are huge: not just economic costs, but emotional and psychological costs,” he added. “These people often head into a downward spiral, where they’re less active and at higher risk of more falls.”

It’s a growing problem, he added, because the average age of the population continues to rise with the Baby Boomers entering their retirement years. “With the demographics changing, [falls] have a huge economic impact on our health care system, and we’ve taken it on as a priority,” Yount continued. “We know falls are preventable, and not an inevitable part of aging. By assessing a person’s risk factors, we definitely can have an impact on the number of falls and injuries.”

Those risk factors include age, multiple medications, decreased strength, decreased balance, vision issues, cognitive problems, dementia, depression, arthritis and other diseases, and even gender, as females are more prone to fall injuries than men. Each of the six Strength in Numbers classes focuses on one or more of these factors, as well as the importance of physical and occupational therapy, exercise techniques to stay mobile, and safety equipment for the home.

“We add different layers to the curriclulum each year,” Ross said. “This year we’re recording a DVD to give to each participant to teach them the exercises, so they can continue to do them at home. It’s a hands-on training program for people who feel like they’re at risk or want to prevent falling.”

Meanwhile, the program is adding a ’train-the-trainer’ wrinkle, with Yount providing specific fall-prevention training to area PTs and OTs.

“Also, our hospice team has decided to address this issue, having what they considered an unacceptable number of falls,” he told HCN. “We provide education for caregivers, and they have significantly reduced the number of falls in the hospice program. We also have a falls-intervention team in the VNA on the skilled-nursing side, where we get physical therapists, occupational therapists, and nurses together to address falls on an individual basis. They’re looking at people’s fall risk and devising an intervention plan based on that.”

Jacqueline Ladew, an occupational therapist with Baystate Visiting Nurse Assoc. and Hospice, has helped develop a community program called “Gadgets and Gizmos” to teach people about adaptive bathroom-safety equipment, assistive kitchen devices, and personal-care aids that can help them maximize their independence and safety while living at home.

“The focus is on the whole house, but especially modifications in the kitchen and bathroom,” she told HCN. “When we talk to people about fall prevention, we’re talking about equipment to make the toilet a little higher, shower benches, grab bars in the bathroom,” as well as tips on kitchen safety, arthritis, and other concerns.

She said that, despite large number of older Americans who fall each year, many seniors aren’t aware of the range of modifications they can make in their homes. “We give them that education. And depending on what kind of insurance they have, it may cover some or all of the cost.

The end goal, Ladew said, is continued independence. “We want to keep people home and out of the hospital, and not returning to rehab or a nursing home. If we can make their home safer, that’s less likely to happen.”

As for patients who are admitted to hospitals, Brennan said the goal is to keep them as safe as possible while there. Like Mercy, Baystate has a falls-reduction committee that monitors every fall event, identifies potential problem areas, and works on developing best practices. But community outreach is critical as well, she added, because oftentimes people living at home, and their loved ones, don’t take them seriously enough.

“If I could only make one point,” Brennan said, “it would be that falls may very well represent a real medical emergency for patients. Anybody can lose their footing and have a fall, but the truth is that patients, families, and even, unfortunately, health care providers often underestimate what the fall means and what can happen.”

It’s one thing, she said, if someone slips on black ice in a snowstorm. “But if there’s not an utterly clear explanation for what occurred, people should really talk to their doctor about the circumstances of the fall — especially a recurrent fall or a new onset of falls. That needs the same kind of thoughtful, nuanced evaluation as someone with a new onset of shortness of breath or chest pains.”

Lanzoni said outside pressure — from the likes of insurers and the Joint Commission on Accreditation of Healthcare Organizations — has been met with enthusiastic commitment inside hospitals to dramatically reduce instances of falls.

“Hospitals have really started to pay attention to this,” she said. “We do not get reimbursed for a fall with injury. Insurance companies are really putting pressure on hospitals, saying, ’patients aren’t supposed to get injured and fall in hospitals. Therefore, what are you doing to prevent it?’”

Now, the core staff in charge of dealing with falls are alerted immediately when an event occurs, so they can quickly get to the bottom of the reasons why. “It used to be just reporting the event. Now, we ask what could have been done to prevent it. For example, were there staffing issues?” Lanzoni said. “We take falls very seriously here.”

Still, she told HCN, “the best thing we can do to prevent falls is patient and family education. Most falls occur at home, and we’ve done a lot with improving that aspect.”

While long-term care facilities have traditionally been ahead of hospitals in this regard, “we’re catching up. Our numbers of falls have gone down very significantly. But that continuum is important. Patients are going to go home, so education is the key.”

Consumers Are Entitled to the Facts

Center of Attention Northampton Project Moves Off the Drawing Board