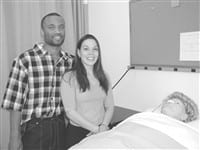 Alex Wright worked as an X-ray technician at Baystate Medical Center for several years before deciding that he wanted to work more closely with patients and
get into nursing. As he pursued his nursing degree at Springfield Technical Community College, his friends and colleagues at Baystate followed his progression, with many people urging him to work on their floors when he was done.
But as the time drew closer, Wright, while appreciative of the Baystate offers and generally impressed with that system, chose nearby Mercy Medical Center instead. He said Mercy’s preceptorship program, an initiative designed to help ease the transition from nursing school to the nursing floor, was what attracted him.
Wright’s opportunity to choose the program he’s most comfortable with, amid a flood of offers, is indicative of life for the Class of 2002 at area nursing programs.

Those students, who received their pins late last month and will take the certification exam in a few weeks, have been courted by innumerable hospitals, nursing homes, and other providers that have been stung by a severe nursing shortage, one that many feel will get worse in the years ahead.

But aside from the bounty of job offers, the Class of 2002 reflects other changes taking place in the profession and the educational system that trains them. Many are getting into nursing as a second career, attracted by improving pay scales and ever-growing opportunities. Some received bonuses to sign on with a specific provider, while others took advantage of unique loan programs offered by hospitals. Still others managed to find assignments that years ago wouldn’t have been available to students right out of school, and at attractive pay scales — in many cases ranging from $38,000 to $45,000 or more.

“This class had a lot of opportunities,” said Dr. Eileen Neville, dean of the School of Nursing at STCC, who noted that while providers are looking for quality graduates, as always, many are in a position where they simply need bodies and are going to great lengths to attain the quantity and quality of nurses they need. In that respect, the nursing shortage has been a blessing in disguise.

“The nice part about the shortage is that it has awakened everyone to the fact that the health care industry is in trouble,” she said. “As a result, hospitals and other providers are responding with things like loan-forgiveness programs and other incentives that can help people pay for nursing school.”

The challenge for STCC and other schools is to find ways to produce more graduates, she said, and for that they’ll need more help from the region’s colleges.
The Healthcare News talked this month with several members of the Class of 2002, who certainly know what it’s like to feel wanted. “Before I got into nursing, I was the one knocking on doors,” said one recent graduate. “Now, everyone’s knocking on mine.”

Lisa Dittmar is one of the recent graduates who clearly benefited from the nursing shortage and ongoing efforts at area hospitals to survive it.

The AIC graduate took advantage of a loan-forgiveness program offered by Baystate that provided $5,000 for the final year of her baccaulaureate program. She doesn’t have to pay the loan back, per se — she does pay taxes on increments of the loan amount — but in exchange commits to at least two years at Baystate, assuming that she does well enough in school to warrant hiring and then passes the licensing exam. She also received a $1,000 sign-on bonus to work at the medical center.

“It’s a great program,” she said of the loan-forgiveness iniative. “They give you the money, but they also let you know that the job isn’t being given to you — you have to earn that.”

If she passes the licensing exam which she is now studying for, Dittmar will be working at Baystate on a ward known as Springfield 3, a medical/surgical floor that she has been working on as a nurses assistant for some time now.

That experience has confirmed her belief that nursing would provide the desired amounts of challenge and independence that she was looking for when, while enrolled in the Medical Office Administration program at STCC several years ago, she decided she would rather work closely with people than type and file memos.

And while nursing isn’t technically a second career for Dittmar — she took on a number of odd jobs after high school — it is for many members of the Class of 2002. Wright, for example, was already in health care, but after watching doctors and nurses perform their tasks while he was an X-ray technician, he decided he wanted direct contact with patients.

Others have come into the profession from different sectors of the economy. Tom Valliere, a recent graduate of Holyoke Community College, is a refuge from the construction industry.

“I always had an interest in science and wanted to work more with people,” he said, adding that the up-and-down nature of construction work also played into his decision to pursue nursing. “One year, things can be going great in construction, but the next, you can be out of work. Jobs in nursing are much more stable.”

They’re also easier to come by these days. Indeed, many recent graduates said they received a number of offers — formal and informal — from providers struggling to fill positions. “Our mailboxes at school would be filled with letters that said, ‘please consider us,’” said Valliere. “We got them from nursing homes, hospitals … all kinds of facilities. It’s a good feeling being sought after.”

Valliere won’t be responding to any of those offers soon — he’s going into the Peace Corps for a tour of duty that will likely last a year — but he’s confident that there will still be plenty of opportunities for him when he gets back.

Meanwhile, many members of the Class of 2002 are finding solid opportunities now, many of them in hospitals or individual departments that would have been much harder for new graduates to join years ago.

Sonia Orozco, another graduate of STCC’s associate’s degree program in Nursing, landed a job at Shriner’s Hospital in Springfield, an opportunity that presented itself due to a few openings at that facility.

Inspired by her older sister, who is also a nurse, Orozco said she decided to follow the same course because she thought nursing was a nurturing profession, one she has long desired to enter. “I saw my sister grow and mature as a person,” she said. “I think much of it has to do with how nursing gives you confidence. That’s why I wanted to get into the field.”

Orozco has worked as a nurse’s assistant at Shriner’s for the past few months and will begin work there full time upon passage of the licensing exam. She was interviewed for the post in March, she said, and it was one of many potential job opportunities that came her way, another trait of the Class of 2002.
Indeed, Neville said STCC and other schools with nursing programs try to keep recruiters away from students until March to allow them to focus on their studies, but this year, that wasn’t possible.

Offers and invitations to consider specific providers came early and often, and in variety of forms, from open houses to ice cream socials. Area hospitals have always recruited heavily out of the local schools, she said, but this spring there was an added sense of urgency due to the ongoing shortage in the nursing ranks.

That phenomenon, prompted by factors ranging from the aging of the Baby Boom generation (the average age of a practicing nurse is 46) to a wider range of career options for women, has opened a window of opportunity for young people and some not so young.

It should remain open for the bulk of the decade, said Neville. “I think things are going to get worse as more and more Baby Boomers retire,” she said. “I think the shortage will be with us until at least 2010.”

Wright told The Healthcare News that he had opportunities to go in a number of directions in the nursing field but really only considered Baystate and Mercy. Ultimately, his choice came down to the hospitals’ preceptorship programs, and he considered Mercy’s better.

“I think they offer the best opportunity for transitioning from your internship to being a registered nurse,” he said. “Going from school to actual practice is difficult … there’s no one to fall back on. When something goes wrong, you can’t ask the nurse — you are the nurse.”

Neville said preceptorships like those at Mercy and Baystate have been added or expanded at many hospitals in an effort to improve nurses’ odds of surviving the often rugged first few years of their assignments.

While the preceptorship programs are helping students after they graduate, the loan-forgiveness programs and additional scholarship efforts are helping more students enter nursing school and stay in it, said Neville. The challenge for nursing programs, she said, will be to help create a supply of graduates that will meet growing demand.

She said STCC has long considered adding a night nursing program, one that would add convenience for many students and increase the size of the graduating class. Such a proposition would be expensive, however, and plans to add the night program were shelved amid the state’s fiscal woes.

If schools are going to add additional programs, she said, it is likely that area hospitals and other providers — those that would directly benefit — would have to help finance such endeavors.

For now, the future of the Class of 2002 looks exceedingly bright. Most graduates have already found work, and those who haven’t are those who are not really looking, for whatever reason.

As Tom Valliere said, “it’s a good feeling to be sought after.”