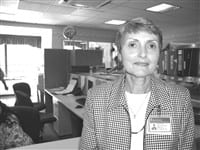 The report comes complete with a menacing title — Health Care at the Crossroads — and is, in the words of one of its architects, a “call to action.”
But to many people in health care administration, the Joint Commission on Accreditation of Healthcare Organiz-ation’s (JCAHO) recent report stating that the

“Hospitals have been living with this for years,” said Beverly Ventura, vice president of Patient Care Services at Mercy Medical Center. She said there was no news in the JCAHO report, which nonetheless grabbed front-page headlines with its urgent calls for bolstering nursing education, making new federal money available for programs to get people into the profession, and transforming the workplace by creating what the commission called a “culture of retention.”

Ventura told The Healthcare News that retention has been a priority at Mercy and other hospitals for some time now. “Getting nurses in the door isn’t the problem,” she stressed. “It’s keeping them, and that’s why we’ve put so much time and energy into creating a more attractive work environment.”

Sharon Smith, vice president of Patient Care Services at Baystate Medical Center in Springfield, said Baystate has taken similar steps and, like other hospitals, has moved to reduce nursing vacancies by adding more staff. The facility has added 90 registered nursing positions in the past two years and plans additional hiring, she said.

The report, released early this month, states that more than 126,000 nursing positions are unfilled today — a 12{06cf2b9696b159f874511d23dbc893eb1ac83014175ed30550cfff22781411e5} vacancy rate — and that the number is expected to increase just as the Baby Boom generation begins placing unprecedented demands on the nation’s health care system. What’s more, the report finds that the nurse staffing problem is a major factor in emergency department overcrowding, cancellation of elective surgeries, discontinuation of clinical services, and the “limited ability of the health system to respond to any mass causality incident.” In addition, 90{06cf2b9696b159f874511d23dbc893eb1ac83014175ed30550cfff22781411e5} of nursing homes home report an insufficient number of nurses to provide even the most basic care, and some home health agencies are being forced to refuse new admissions.

Ventura, like Smith, said the report will be dissected to see if it provides any new insight for hospitals about how to address the problem, but for the most part, the JCAHO white paper merely adds some exclamation marks to points that are already being covered.

In short, hospitals have been aware of the impact of the nursing shortage for some time and have been taking steps to minimize impact of quality of care while also looking to build a workforce of nurses for the future, she said.

In Black and White

“We must as a country understand not simply what needs to be done, but who specifically is responsible for getting each task done,” he said. “Otherwise, we face a future in which patient safety and health care quality will be significantly compromised.”

He said the problems stem from a number of factors, including job dissatisfaction, an aging workforce, cost-cutting on the part of hospitals and other providers, reductions in hospital re-sources to support nursing care, and overwork and stress resulting from growing patient care assignments.

To combat these problems, the agency identified three major strategies:

• Transforming the workplace to give nurses the independence and support they need to do their work well, thereby creating a culture of professional satisfaction and encouraging retention.
• Bolstering nursing education to ensure that new graduates are better prepared to care for fragile patients. This can be accomplished by re-invigorating nursing schools by funding new faculty positions and incenting nurses to seek advanced degrees.
• Making new federal money available to incent hospitals to invest in nursing services.

The report concluded that resolving the crisis is a matter of accountability, and that hospital administrators, public policy makers, nursing schools, nurse executives, and physicians all have roles to play in reversing current trends.

And while some have cast doubts on whether hospitals are willing and able to take steps to resolve the nursing crisis, both Ventura and Smith said their facilities have taken a number of steps aimed at adding staff, reducing the workloads — and, therefore, the stress — of current nurses and improving retention rates.

Ventura listed some 21 steps that Mercy has taken, starting with a 50{06cf2b9696b159f874511d23dbc893eb1ac83014175ed30550cfff22781411e5} reduction in its vacancy rate for RNs, with 42 new RN hires since April 2002. Other proactive efforts include the hiring of a ‘nurse recruiter/coordinator,’ establishment of a preceptorship program designed to ease the transition of new graduates into the hospital’s workforce, sign-on bonuses and shift differentials, an active recruitment campaign, and several other steps.

Smith said Baystate has spent more than $2.5 million on programs that, directly and indirectly, address the nursing shortage and its impact on patient care.

“In general, Baystate is working to build a workforce for the future,” she said, through partnerships with area colleges with nursing programs and extensive recruitment programs. For example, the medical center funded two clinical instructors at the UMass nursing school this past year, enabling it to accept 16 students that would otherwise have been turned away.

Meanwhile, the hospital is working with recent graduates to ease them into their new jobs, with the hope that with additional attention and support they will be more likely to succeed in what can be a very challenging setting.

“We make sure they get the support they need … they’re coming to a very busy place,” she said. “By giving them some additional support, I think they can become oriented to the system more quickly and, hopefully, stay with us longer.”

Ventura said Mercy has similar programs, including its highly acclaimed preceptorship program, which, like Baystate’s, is designed to ease the transition and help more nurses stick.

But she acknowledged that this is only one element in what must be a broad strategy to both attract and retain more nurses. She said area nursing schools are limited in the number of applicants they can accept by both physical space and budgetary concerns. Hospitals are helping in this regard, but more steps must be taken to allow more people to get into the field, including increases in the amount of aid available to prospective students.

“Many of the people getting into nursing now are older adults with families,” she explained. “Many of these people need some help to afford nursing school.”

As for nurses already in the field, hospitals and other providers are taking steps to control their workloads and provide them with the control over their jobs and schedules that this generation of nurses demands, said Smith.

Also, hospitals are trying to find ways to reduce stress and remove from nurses’ workloads those responsibilities that can be handled by other health care professionals, she said.

At Baystate, administrators have created what is known as a “work sampling” program, designed to record and analyze the workloads of nurses and other health care professionals to ensure that they are appropriate. “We don’t want to be guessing on workloads and how much might be too much,” she said.

One initiative implemented recently at Mercy, called the “Partners Program,” which pairs each RN with a patient care technician, was conceived to free up nurses from tasks that others can perform.

“We took our nursing assistants and created a patient care technician program for them,” she explained. “The idea is that every RN would have a partner who would perform simple patient tasks that nurses shouldn’t have to do, allowing the RNs to do the things they were educated to do.”

She said the program was greeted with some skepticism from nurses, but most have been turned into believers. “One woman went from completely hating it to saying that she would never go back to the old way of doing things,” she said.

Both Ventura and Smith say that despite recent successes, the problem of nurse recruitment and retention will be with hospitals and other providers for years, if not decades, to come.

They agree with the authors of the JCAHO study that the struggle requires a consistent, coordinated effort that includes all the players in health care today.
But they stress that the work has already begun, and that while health care might be at the crossroads, hospitals are working hard to provide some direction.