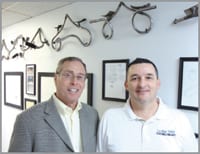 As the old saying goes, necessity is the mother of invention. While repeating those words, Dr. Roland Berthiaume drew both a nod and a wide smile from his business partner, Thomas Valentine.

The two men are the brains and brawn behind Lo-Bak TRAX, a steel, V-shaped bar with grips and pads. It’s a deceptively simple device, Berthiaume said, but after years of his own lower back pain, and some Yankee ingenuity, the bar he invented has changed not only his life, but others’ as well.

That’s a goal the two are planning to continue at (as the banner outside their building on Maple Street in Springfield reads) the world headquarters for Lo-Bak TRAX Portable Spinal Traction. Sitting down with HCN — lying down, actually, to show how the device works — Berthiaume and “Mr. V,” as he calls his partner, told the story of how an invention not only became reality, but how they hope to change an age-old approach to the treatment of chronic lower back pain, a problem which they said affects upwards of 85{06cf2b9696b159f874511d23dbc893eb1ac83014175ed30550cfff22781411e5} of Americans.

From a business perspective, there’s a lot of work ahead. And even though the unit has been on the market only since late summer, it has made strides forward. Yet, some may be skeptical, thinking there’s no way such a device could improve upon existing machinery that has been honed since the time of Hippocrates and which today can stretch into the hundreds of thousands of dollars.

“As simple as it looks, it’s never been done before,” said Berthiaume. “In fact, what we’re encountering most is that people see it and say, ’that looks too easy; there’s no way that device can replace my complicated procedure. No way, no way.’ There’s almost always doubt whenever you introduce something new.”

His professional relationship with Mr. V began years ago. Valentine is a well-known local businessman who is the founder and owner of Maplegate, a comprehensive rehabilitation clinic in Springfield. When presented with the prototype, Valentine immediately connected with his friend and colleague and decided to become a financial partner in the venture.

“I’ve had low back problems my entire life,” Valentine said. “After using his device, I found that it worked. I told him, ’I want in. I don’t want to deal with a group of other investor partners.’”

The wall just inside their world headquarters is lined with all the early prototypes of Berthiaume’s design over the course of two years. Marketing a new invention, one with such broad appeal as the Lo-Bak TRAX, and building a business from that was the heart of the conversation both business partners had with HCN. For them, it’s not just about making an impact on people’s health and well-being, but also using that device to help stretch the possibilities for industry in the region that they call home.

“It requires a lot of force to stretch the lower back, the separation of the vertebrae,” Berthiaume explained, “which is what you want to relieve with back pain. The reason why it’s complicated and the reason why you need a lot of force is that most attempts to traction the spine do so with the lumbar curve of the spine intact. The spine is S-shaped, with something called the lumbar lordosis, a fancy name for the curve.

“As any student of physics will tell you,” he added, “putting force on a curved structure requires a lot more force.” Traditional forms of traction maintain lumbar lordosis, he said, and then proceeded to lie on his back, bending his knees and bringing his feet to the floor, close to his torso.

“But lying like this,” he said, “the curve is flattened, and your spine is straight.”

There are some traction methods that use similar postures to straighten the spine, he said, but they always involve a pulling motion. “My theory for the technique was based on the idea that it’s easier to push than pull,” he said, while using the Lo-Bak TRAX to stretch. “Try to push a car — you can do it by yourself. Try pulling it — you can’t.”

Berthiaume continued the simple, modulated pushing motion using the device braced against his thighs. “It’s as simple as that,” he added. “We’re using physics, knowledge of anatomy, and common sense.”

That common sense was a response to a problem he had for years. Berthiaume is a chiropractor with access to any number of treatments available to medicine — his wife is a massage therapist — and yet nothing worked to remedy his lower back pain. “I tried everything, yet my pain was getting worse every decade,” he explained. “Short-term, yes, there were things that would help, but long-term, they did not.

“I started thinking of ways on my own, knowing the spine,” he added, “and kept experimenting with different things. So I happened upon the stretch in my bed one morning. I started using my hands to push, and I thought, ’wow, I’ve never felt this stretch before.’ I kept telling my wife, ’if I could just invent something that my patients could put there and push, something simple and easy, it would be great.’”

Beneath the wall of prototypes is something Berthiaume called his “poor man’s patent.”

“When I started telling people about this idea,” he said, “they told me I’d better protect myself. I looked into a patent attorney, but they cost tens of thousands of dollars, and I couldn’t afford that. A legal student told me to put as much thought onto paper, put that in an envelope, and mail it to myself. There you go, postmarked Sept. 3, 2009.”

But the conversation turned to the notion that a successful business venture is much more than just a good idea.

Valentine added, “yes, you need funds. But more than that, you need to surround yourself with people who have strengths.”

His strengths are many. Long associated with the business community in Springfield’s urban core, Valentine is, among many things, a mechanical engineer, licensed general contractor, property developer, and entrepreneurial investor. His role as owner of Maplegate gave him a solid population of health care professionals to test out the Lo-Bak TRAX, and he described the grassroots effort the pair has conducted in getting the word out on their venture.

“We started making contacts with people in Springfield about where we should go next and how to proceed,” he said. “One contact would help us get to the next contact, and then from there the next. We’re both novices with regard to marketing and promotion. I’ve been in business a long time, but I’m still learning something new every day.”

Berthiaume credits his own tech-savvy nieces and nephews for helping to navigate the finer points of online social media, but it was his own chiropractic practice that introduced him to the Springfield Falcons and Armor, teams which both use the Lo-Bak TRAX.

The two have used an informercial to pitch the Lo-Bak TRAX on TV, and Bethiaume admitted that a major step now, in the early stages of his invention going to the marketplace, will be to establish a measure of trust and confidence that the product is not just another ’as-seen-on-TV’ type of product.

“For me to come in and say, ’I’ve got a piece of equipment that probably looks to you like bicycle handlebars, and yet this will cure your patients’ lower back pain,’ [a back specialist] would say, ’come on, buddy, did you make that in your garage?’”

“The reality is, you’re talking about a medical profession that will cut a patient’s back open and literally have a nervous system in their hands on a daily basis,” he continued. “To them, everything is complex, equipment is in the hundreds of thousands of dollars, and new technology means computers.”

He pointed to a framed letter on the wall from the U.S. Food and Drug Administration. “That was the ultimate pat on the back,” he said. “They told us we couldn’t sell this in the United States, and you might think, why is that a pat on the back? The reason was because we were introducing new scientific technology to non-powered orthopedic traction.” The FDA tested it, reviewed it, and did eventually give Lo-Bak TRAX clearance, which Berthiaume said was a lengthy process.

As important to the pair as helping alleviate an age-old health problem is the potential to help with another pressing concern — the downsizing of local manufacturing. The final prototype of what became the Lo-Bak TRAX was machined by A.G. Miller in Springfield, and Berthiaume said the shop reluctantly told him that, with a good possibility that the device will be a success, they’d never be able to keep up with demand. From there, the pair forged a partnership with Columbia Manufacturing in Westfield, and Valentine said it is there that the Lo-Bak TRAX will be made.

“Ultimately, our goal is to get an international patent and, at that point, have additional manufacturing plants here in the United States,” he said. “We had someone very interested in what we were doing and offered us a substantial amount of money, but his plan was to make them in China. We said ’no.’

“I don’t care what you want to offer us,” he added. “We’re not going down that route. We want to put local people to work, and we want this to be proudly made in the United States. If we got more people to act that way, you’d like to think that we wouldn’t have the trouble we do in this country.”

Critical mass may be inevitable, Berthiaume said, referring to a growing number of published testimonials that people are offering for his invention. “Once people get this in their hands, use it, get relief from it, and start to tell others about it, it will take off. The power of this device and the value of this device cannot be overestimated. Everyone dismisses it as too simple, too easy.”

The inventor and author of the first health care success story for the Lo-Bak TRAX smiled and added, “it is simple. Isn’t that great?” 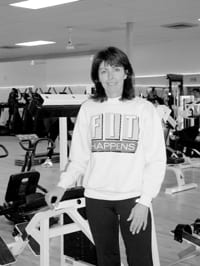