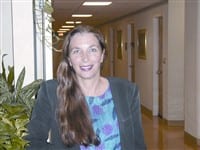 Arianne Krumholtz calls managed care a “balancing act.” And the number of entities to balance can be staggering.
There are private health plans, of course, seeking to control costs while making sure customers get proper care. There are the public payers, Medicaid and Medicare, complete with reimbursement headaches that hospitals must bear. There are employers, trying to get the best services for their employees at the best price.

And, of course, there are the patients, who want better-than-adequate care with few out-of-pocket expenses.

And Krumholtz, as managed care director for the Sisters of Providence Health System (SPHS), is at the center of it, trying to ensure that patients are served, revenues more or less match costs, and Mercy Medical Center and all its satellites remain relevant to employers and health plans alike.

Few would seem to be better equipped for the job. After working in strategic planning for Health New England and Kaiser Permanente in the 1980s, she crossed over to the other side of her industry 12 years ago, managing behavioral health contracts for Baystate Health System before joining the SPHS family in the spring of 2002.

“It gives you a very different perspective when you’ve been on both sides,” Krumholtz said. “For me, the role is really to ensure that we have fair and reasonable contracts with the payers in order to make sure we not only maintain our clinical programs but further invest in them.”

As she told The Healthcare News, that’s not always easy with so many interests colliding. But when those interests have something in common — valuing the well-being of patients — the goal at hand is a clear one.

When Krumholtz started out working for health plans, the industry was a much less competitive one, and HMOs had more leverage in dealing with employers and hospitals. Today, with a higher penetration of managed care in Massa-chusetts, she said, much of the decision-making process among payers is employer-driven.

“They will look at a health plan not just for the cost to them but how big the network is and how many choices their employees will have,” she said. And that, in turn, partly drives what range of services hospitals will offer — and what types of contracts they will negotiate with managed care companies.

In other words, if an employer values a certain service in a health system — Mercy’s touted rehabilitation arm, for example — the hospital is more likely to spend money maintaining that program, and that will influence its demands during contract negotiations with health plans. It’s all give and take.

“As a hospital, we have to weigh how this affects us,” she explained. “When the plan is asking for a particular set of rates, there has to be some give and take — they can’t be too high, but also not so low that we’re doing a disservice to the programs.”

And the programs, perhaps just as much as the costs, are what employers are looking for, Krumholtz said, because a solid benefits package helps companies attract and retain employees. “Although they’re in the background, employers are a bigger player than people think because of their influence.”

That goes double — or more — for large companies, such as IBM or MassMutual, who can channel hundreds or thousands of customers into an HMO and, if they choose, try to influence which providers a plan contracts with. That’s why running well-respected programs, even if costs exceed revenues, can be a major benefit for hospitals.

“You need a range or continuum of services,” she added. “I don’t make the decision on whether a program gets run or not, but I do help the person who oversees those programs look at those revenue streams and determine what we can afford to invest in.

“That’s how we lobby for better contracts — by using the leverage we have as a hospital: these are specialty services, and if you want them, you need to cover them at a rate that covers our costs.”

That can be difficult in a state where Medicaid reimburses hospitals just over 70 cents on the dollar — and a full two-thirds of reimbursement comes from that public sector.

In addition, hospitals are obliged to provide free care to patients who have no insurance, and the state’s Uncompen-sated Care Pool can’t reimburse for all of it.

“Most hospitals have to dip into that to make ends meet,” she said, “but it seems to be a growing number. I don’t know where the funding is going to come from.”

Meanwhile, health plans are feeling the squeeze from situations like that of Medicare, which has been increasing its per-patient payouts to HMOs that carry senior plans at a much lesser rate than health costs are rising (see related story, page 13).

“We need to ensure the hospital can make ends meet,” Krumholtz said. s“We live in a very tough environment for health care nationally, but especially in Massachusetts. We don’t typically meet all our expenses, so the hospital has to be very efficient.”

That’s why the other part of her role is to be a steward of sorts for the health system, making sure that resources are managed well. She added that the emergence of managed care in general, with its emphasis on keeping costs in check, has not been a bad thing, as it has trained hospitals to use revenues more wisely.

“It’s a matter of giving patients not excessive or inappropriate care, but the care they need,” she said. “If we can provide the same care in an outpatient or residential setting that we can in the hospital, we can help drive down the cost of care.”

Krumholtz also has her eye on quality improvement across the health system, making sure efficient spending doesn’t add up to compromising care. After all, many HMOs make a point of studying a hospital’s patient outcomes, not just its finances.

“Some plans, more than others, are clinically focused,” she said. “Hospitals are saying, ‘let’s look at it together, but don’t micromanage us. Give us sufficient contracts so we can do a good job and be good stewards of our health care resources.’”

The world of managed care continues to evolve, Krumholtz said, with trends emerging every year. For instance, more plans are going to ‘carve-outs,’ or subcontracting health plans to companies that specialize in a certain area, such as behavioral health.

The plan might be more savvy because of the particular expertise of the subcontractee, but it also complicates matters for hospitals, which have to adhere to two sets of rules.

No matter what the setup, she said, what’s important is that providers and health plans work together and understand each other’s goals. For her part, she says she recognizes the value that both employers and health plans place on value as well as cost — and that all hospitals are aware those priorities.

“It’s a coveted benefit to have strong health care coverage,” she said. “Any family with small children is going to look to that in terms of employer choice. And employers have had to get much more savvy about how they shop and pay for health plans. I guess that, as a hospital, we always had to be good at controlling our costs without chipping away at good care.”

If Krumholtz’s experiences on both sides of the managed care equation have taught her anything, it’s that each HMO has a distinct personality, and it’s valuable to know how each operates. After all, health insurance is a business, but it’s the business of taking care of people who need help.

“Are they interested in quality care?” she asked. “I don’t want to it to be just about costs — I want to know they’re truly interested in the care that’s given. It’s justthe right thing to do.”

Red Cross Pioneer Encourages All to Learn CPR and AED