A woman named Beth experienced a type of seizure that caused her muscles to jerk suddenly without warning, often causing her to fall.

However, Beth’s golden retriever, Russet, was able to tell minutes before she would have a seizure. Russet would bark a warning, giving Beth time to sit down before the seizure occurred. The dog’s ability allowed Beth to go about her daily tasks without sustaining severe injury from falls associated with her seizures.
In effect, Russet served as a sort of early warning system, easing Beth’s worry and giving her peace of mind.

A seizure alert dog has the ability to warn a person of an impending seizure moments or hours before the person has clinical signs of a seizure. When trained to have safe, reliable behavior in public, seizure alert dogs can be service dogs for people with disabilities.

How Do They Know?

This is a question that has yet to be answered. Right now, all the evidence about this phenomenon that has been gathered is anecdotal. There seems to be at least two distinct phases of alerting behavior. First, the dog recognizes that a seizure is going to occur. Then the dog physically reacts to that perception.

Several hypotheses have been proposed as to what a dog recognizes when a seizure is going to occur. Some people think the dog perceives slight changes in a person’s body language or behavior before a seizure, and this is the trigger. It is a well-known fact that dogs are very perceptive at reading human body language. Another hypothesis is that the dog detects very subtle changes in a person’s body odor prior to a seizure.

Whatever the mechanism, this is an ability that the dog exhibits immediately or develops over time while in contact with a person who has seizures. The ability in dogs to detect seizures seems to be fairly common — numerous people with seizures report seizure alerting behavior in their dogs. Lacking scientific proof, it appears that a dog’s perception of oncoming seizures is not a behavior that can be trained in the traditional sense; rather, it can only be identified and encouraged.

Dogs display a wide range of alerting behaviors. Part of the challenge of working with a potential seizure alert dog is identifying the specific alerting behavior. Dogs have been observed to lick the owner’s hands, bark at the owner’s face, or act restless and pace prior to the person’s seizure.

The amount of time from when the dog alerts to the actual onset of the seizure varies from dog to dog. One dog would consistently gather all his toys and dump them in front of the owner several hours prior to a seizure. Identifying consistent alerting behavior in a dog that alerts long before a seizure requires an astute and careful observer due to the lapse of time between the alert and the event.

The question often arises as to whether one breed of dog excels at seizure alert work. No one breed has been identified as superior. Seizure alert dogs come in many breeds and mixes: golden retrievers, setter mixes, Samoyed crosses, border collie crosses, and German shepherds are among those that predict and alert to their owner’s seizures.

The most important factor seems to be the dog’s individual disposition. Successful seizure alert dogs are people-oriented and very responsive to human emotions and feelings. Their ability to observe and respond to their owner’s behavior makes them successful at seizure alert work. If a dog is to be used as a service dog in public places, it must also be friendly and not dog-aggressive, overly protective of its owner, shy, or nervous.

Dogs can be trained in other capacities to assist people with seizure disorders. A dog can be taught to stay with a person throughout a seizure. After a seizure, when a person might often be confused and disoriented, a familiar dog can serve as a comforting presence and can assist in orienting the person to their surroundings. Also, the presence of a service dog can help deflect potential embarrassment away from the person who has had a seizure.

A dog can be trained to go get help or even activate an alarm when a person experiences a seizure. This can be useful for a person who has frequent seizures and requires constant supervision. If a trained dog can replace the need for the continuous presence of a caregiver, this may give the person with seizures a greater sense of independence.

In addition, stress can increase the frequency of seizures in some people. It has been shown in numerous studies that animals can lower our stress levels in daily life. The presence of a service dog in the life of a person with a seizure disorder can potentially reduce seizure frequency by lowering the person’s stress level.

Proper drug therapy is the cornerstone for successful seizure control, but a dog can play an important role in improving overall quality of life for a person with a seizure disorder.

Kelly had her service dog, Kona, a Samoyed/border collie cross, for only a short period of time before she noticed the positive effect Kona had on her ability to cope with daily life. Kelly experienced a feeling of extreme fear before a seizure would occur. Kona’s presence, a warm, furry body pressing against her, would help to calm and focus Kelly when these sensations occurred.

After she got Kona, Kelly felt more secure about going out in public. Although she still couldn’t predict when her seizures would occur, she knew Kona would be there to get her through the scary feelings. By focusing on Kona and her training, Kelly worried less about having a seizure in the wrong place. Kelly noticed a decrease in the number of stress-induced seizures she experienced after she acquired Kona.

The training of service dogs for people with seizure disorders, especially the training of dogs that are able to sense and alert to a person’s oncoming seizures, is still an evolving field. It’s a challenging area where much research must still be done to answer the questions about how and why some dogs have this ability, and determine a method to easily identify these dogs.

Still, for the person with a seizure disorder who likes dogs, teaming up with a service dog can be a liberating and rewarding experience. 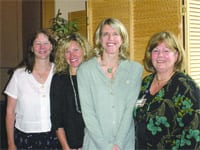