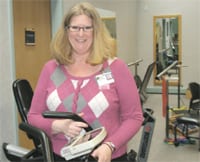 As Jill LeGates talked about the time-crunched demands of hospitals — the increasing regulations and demands of insurance payers, and the mass of paperwork that accompanies those challenges — she came to one clear conclusion.

“The care is the easy part.”

As director of Rehabilitation Services at Weldon Rehabilitation Hospital, she was speaking from the perspective of post-hospitalization care, when patients are transitioned into any number of options, from acute rehab to outpatient therapy, that will help them transition back to normal life after landing at Mercy Medical Center.

And that process of determining the best course of care after a hospital stay begins the same hour the patient arrives in the ER.

“It depends on the illness or injury — it could be a stroke, could be a car accident, could be any number of things that require hospitalization,” LeGates said. “But the step that drives everything that happens next is evaluating the next level of care the patient needs and would benefit from.”

That job typically falls largely to a referral coordinator who consults with a patient, as well as doctors and nurses, shortly after arrival. Why craft a post-hospital rehab plan even before a patient is treated? Well, it’s partly because of that aforementioned time crunch — the fact that hospitals discharge patients much sooner than they did in decades past, and there’s often no time to lose in lining up the appropriate rehab services.

“When someone comes to the ER, we’re called down quickly to do assessments,” Fellows said. “As soon as someone comes through the doors, we start with the discharge process. Cooley’s really proactive in defining the best discharge plan for people.”

Again, one reason for speed is that time factor. “They don’t want to keep people in the hospital too long, for so many reasons,” from cost to infection control, she explained. “People shouldn’t live in the hospital; we have to get them back to living.”

That mindset has become more pronounced as the medical industry, and hospitals in particular, move toward a more cost-effective model of care, and it becomes more important from a financial perspective to reduce rehospitalization rates.

And that puts additional pressure on rehabilitation departments to make sure patients get the level of care they need to stay healthy.

When Vincent McCorkle stepped down in 2010 as CEO of the Sisters of Providence Health System, which includes Mercy and Weldon, he joked to HCN that he’s been party to some “bad business decisions” over the years, meaning providing care at a financial loss.

LeGates can relate to that, noting that sometimes there’s conflict between what an insurer is willing to pay for and what a rehab patient actually needs, and if the difference is a couple more days of inpatient care, they’re probably going to get that care.

“It’s a combination of all the staff evaluating the patient,” she said. “Obviously someone with a very extensive illness can’t go home from the hospital, so we look at what the next level of care is at Weldon.

“That’s really where this financial piece comes in,” she added. “We’re making sure the patient goes to the appropriate level of care before going home for any outpatient services.”

Rehabilitation will be a key component of the accountable-care model of paying for health care — a model that community hospitals like Mercy and Cooley Dickinson have been actively promoting.

Accountable-care organizations are groups of providers — including doctors, nurses, specialists, therapists, and others — who work together in assuming risk for treating a defined population of patients.

“There are incentives to save money while improving care delivery and get better outcomes,” Mark Fulco, Mercy’s senior vice president of Strategy and Marketing, told HCN late last year. “And if you do a better job delivering quality care and save money, in the end you get to keep some of those savings. Some goes back to the government, but the physicians and providers get their portions of that.”

But if patient care doesn’t hit quality metrics, no one gets paid, so rehabilitation becomes — not that it wasn’t before — a critical component of the process, whether undergoing acute rehab or accessing outpatient services.

“When a patient is going home, there are other evaluation processes; we need to make decisions on what’s the next best level of care,” LeGates said. Some patients here don’t go straight home even after maximizing this intense rehabilitation program; they need to go on to a lesser level of care and continue to advance those needs they have. And when they go home, what do they need in the community to assist them in staying home? Some of them use home-care services, too.”

Weldon’s services include a day rehabilitation program for clients with acquired brain injury, neurological disorders, and complex medical conditions. Day rehabilitation focuses on restoring or increasing an individual’s independence in the home, community, and workplace. The patient plan is based around their particular social needs.

Fellows said patients at Cooley Dickinson access a broad range of physical-, occupational-, and speech-therapy services depending on their needs and goals after they’re discharged. “We see people who are on ventilators, people who were in car accidents, stroke victims, orthopedic patients, older folks with the flu,” she noted.

Even major surgeries, such as the joint-replacement program that Cooley touts as a particular specialty, have a much shorter turnaround time than in the past. Those procedures are typically scheduled for Monday, and patients are returning home by midweek — with a rehab plan in hand, of course.

“We’ll sometimes see people the day of surgery, or early the next morning,” Fellows said. “They’re crying to get out of bed; their back is killing them because they’re not used to being down. With some [joint-replacement] surgeries, folks go home the next day.”

That’s a story that’s certain to be repeated as health care in general ramps up its focus on fiscal efficiency, which is one reason Cooley is proud of a network of rehabilitation centers throughout the region — focusing on everything from physical and occupational therapy to hand and vestibular therapy — that patients can access in their own communities.

“They don’t want you to be here in the hospital; they want you home as soon as possible,” Fellows said of insurers. “So I feel that rehabilitation is one of the gatekeepers, with case management, nurses, and physicians, all working together to get patients out in a safe way.”

Sometimes patients are referred to a skilled-nursing facility for a time, Fellows said, or linked to home care — anything to advance their progress toward the goal of independent living. “We work alongside family members to plan the process and do what’s best for the patient, but the patient has the ultimate choice.”

None of which makes LeGates’ job any easier.

“There are a lot of payers in the mix now in Massachusetts, with everyone insured,” she said. “There are a lot of different plans, managed-care plans, and sometimes they drive a lot of the care. But everyone here is keeping their eyes on providing the right level of care, the right treatment for each patient. That is a huge challenge.”

One that begins the moment the ER doors slide open — and doesn’t end until the patient is back on his or her feet — literally and figuratively.

What’s Your Function? Noble Hospital Sports and Rehabilitation Center Wants to Help You Get It Back