Researchers report in the American Journal of Physical Medicine and Rehabilitation that leaning one’s head back over a sink in a hair salon for a shampoo could result in a serious neck injury.
For example, when Michael Werner went to get his hair cut for the first time after his recovery from neck surgery, he never expected to be in pain for days afterward.

“I was in having my first haircut after the operation, and I said, ‘Bobby, you have to be gentle,’” said Warner, a 57-year-old former administrator of Radiology at University Hospital in Newark, N.J. “But he wasn’t gentle at all. When I got home, I could barely move my neck.”

According to Dr. Todd Stitik, the New Jersey physiatrist who first reported on the connection between salon sinks and cervical radiculopathy in the American Journal of Physical Medicine and Rehabilitation, cervical radiculopathy is usually caused by three main factors: a herniated disc or discs in the neck and upper spine, arthritis, or whiplash and trauma which stretches the nerve.

Stitik said the aggravation of these conditions occurs while one is getting a shampoo because of the positioning of the bones in the neck while reclining into the sink.
“In the office, we do a procedure called the Spurling Maneuver, which is the act of tilting the head back and slightly to the side, putting pressure on the side of the head,” Stitik said. “Stylists often do this while the client is lying in the sink, which is bad because of the positioning of the neck in the sink. Doctors perform this maneuver while the patient is sitting up, which puts less pressure on the neck.”

Stitik’s partner and co-author, Scott Nadler, said the pressure is caused by the narrowing of the canal around the spine which puts pressure on the vertebrae and thus causes pain.

“The narrowing of the space around where the nerve root is located causes the pain,” said Nadler. “This is what happens when pressure is put on the neck, such as in the salon sink.”

Salon sinks are not an isolated cause of pain to people suffering from cervical radiculopathy. In fact, while the position of the neck in the sink causes pain, invariably there is another factor contributing to the cause of a pinched nerve.

“All of my neck problems started because I played football in my youth and my neck would get snapped back when I would get hit,” Werner said. “My daughter, when she was little, used to pull my neck back. She was just playing ‘peek-a-boo,’ and I didn’t think anything of it.”

The good news is that cervical radiculopathy is treatable and in most cases does not require surgery. With physical therapy, which consists of keeping the neck in traction and exercises, patients are getting around faster and easier.

“We perform exercises to open up the space at the opening of the spine,” said Nadler. “These exercises not only ease the pain, but improve the overall posture as well.”

Stitik does suggest, as a precautionary measure, letting anyone who might touch or handle one’s neck know about the pain.

“Be aware that problems may arise,” Stitik said. “Be careful when you go to get your hair cut. Make sure you mention that you have a pinched nerve to your stylist so that he or she will not be so rough when they shampoo your hair.”

Kari Belt of the Just Hair salon in Indianapolis, Ind., said a customer’s comfort is the primary concern.

“If (a customer) is uncomfortable, it’s usually because they can’t fit into the chair right,” said Belt. “They’re too short or too tall. Our chairs are electric, so we can adjust them to fit the client better and make them more comfortable.

“I have one client who can’t lean back in the chair very far,” she added. “But you find a way to work around it without putting them in pain.”

Stitik said his discovery needs to bring about some changes in the way salons operate and even in the technology used in salons.

“We were just talking about how it would be great if someone would invent a chair that would ensure the proper positioning of the neck while it is being shampooed,” he said. “More studies are needed on this subject, but we’re on the lookout and hope to report more as we see them.”

For Werner, the scare he had at the salon has left a lasting impression. Now, before he goes to the barber, he shampoos his own hair and lives by one rule of thumb: never let anyone touch your neck. The lesson seems to be, if it hurts, don’t do it again.

“I never went to that barber again,” Werner said. “And after all this time, my anger has not subsided.” 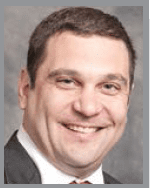 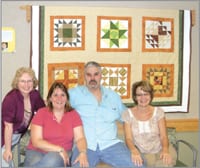 Quilt Donated to Hospital Holds a Lifetime of Memories