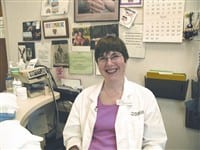 Karen Pettengill says the most frustrating aspect of occupational therapy is getting patients to change the way they do their jobs — or simply slow down.
She talked about a hairdresser who used her hands all day and developed some repetitive stress damage. But she simply wouldn’t stop working for a while, so she didn’t get any better.
“The hardest thing I have to tell anybody is to change their habits,” said Pettengill, center manager at NovaCare Rehabilitation in Springfield and an occupational therapist specializing in hands.

“Once you have a repetitive stress injury that you do not address promptly, you are at very high risk of recurrence of the same problem,” she said. “It’s very difficult to get rid of these problems once they’ve taken hold.”

Unfortunately, most people aren’t even aware of the poor habits — which include poor posture, nutrition, and work styles — that lead to repetitive stress, dismissing hand and neck pain as minor nuisances that will go away. And by ignoring the pain and its causes, the tendency far too often is to let these nagging problems grow steadily worse.

“I love to see people come in who have had pain for only one week because I know I can help them to be cured,” Pettengill said. “I’m not going to cure them — they’re going to do that by changing their habits.”

And those who recognize those poor habits in their own lives, she and other therapists told The Healthcare News, have already taken the biggest step toward better overall health.

According to Kathleen Pappas, clinical manager of Physical Therapy at Weldon Rehabilitation Hospital, factors as simple as poor posture or a badly laid-out work area can lead to serious health problems if not caught early.

For instance, she noted that many people have their computers aligned to the right or left on their desks, causing neck strain to build up throughout the day. Ideally, an office worker’s hips, trunk, knees, and elbows should be at 90-degree angles, with feet flat on the floor and wrists in a natural position, perhaps aided by a mouse pad with a wrist rest. And, of course, the computer screen should be directly in front of the eyes.

All these guidelines reflect a general emphasis on ergonomics, the study of how people are affected by and adjust to their environment, particularly in the work setting. However, even when sitting at an ergonomically correct work station, bad habits will still cause problems. After all, Pettengill said, proper equipment is only one part of the solution.

“A patient with repetitive stress is usually not an athlete, but a person with a sedentary lifestyle and poor posture, without strong shoulders, who compensates for these weaknesses by overusing the muscles in the hands and arms,” she said.

For example, one of the most common conditions, lateral epicondylitis, or tennis elbow, can be developed simply by misusing a computer mouse, she noted. “Look at some people, slouched over, sliding down in the chair, using the muscles that lift their wrists and fingers to compensate for the fact that their shoulders aren’t doing a good job.”

Meanwhile, carpal tunnel syndrome is often caused when the tendons in the carpal tunnel, the narrow passage between the forearm and hand, become inflamed, pinching the median nerve that runs through the passage, causing numbness and tingling in that area. That, too, can be eased with a combination of therapy and changes in work routine.

Altering bad habits is the key to recovery from any repetitive stress disorder, but other treatments are available, Pappas said. First, a patient complaining of a problem would see his or her own physician to examine the symptoms and perhaps involve a therapist to develop a plan of care.

“Get a good diagnosis first,” Pettengill echoed. “Don’t just assume because you have wrist pain that you have carpal tunnel. It’s a popular thing to have, and it’s often something completely different.”

A plan of care might include stretching, exercise, and retraining on a specific task that is causing pain and injury. Other treatments, such as splints and straps to support muscles and prevent unwanted motion; aquatic therapy; and anti-inflammatory medications, could follow.

“I know a lot of people are afraid of cortisone injections, but a well-placed injection at the right time can work wonders,” Pettengill said. “But always, the most important thing a patient can do is stretching, strengthening, and conditioning exercises. All those other things prevent worsening of the problem or relieve inflammation.”

Altering lifestyle is usually a main component of any treatment plan, and when it comes to changing habits, patients need to examine more than their workplaces, said Jill LaBelle, clinical manager of Occupational Therapy at Weldon. Any life activity could foster poor techniques that lead to stress and strain, from housecleaning, cooking, and carrying groceries to lifting rocks and bricks for gardens and patios.

Ironically, as spring brings warm weather and outdoor projects begin, it’s the smaller lifting jobs that tend to cause the most problems, Pappas said. Most people lifting, say, 75 pounds take the time to make sure they are using their legs and protecting their backs, but they might not use the same caution when casually bending down to pick up a five-pound brick or a coil of hose.

Ergonomics is becoming a bigger focus in the modern office. And no wonder — the average ergonomic investigation costs around $250, while workers who end up with full-blown syndromes such as carpal tunnel or tendinitis often need surgery, and the average carpal tunnel claim can cost up to $20,000 after surgery, according to Gail Hegeman, a certified ergonomic evaluation specialist at Wing Memorial Hospital.

Wing is one of many businesses that stress an ergonomically correct workplace. Now, Hegeman and another member of that facility’s Ergonomic Committee are taking their message on the road, consulting with area companies on how to reduce bad work habits and the health problems that arise with them.

Hegeman, who is also an occupational therapist and hand therapist; and Anne Grace, a nurse and director of Occupational Health, will soon begin visiting area factories, offices, and other types of businesses to root out ergonomic problems in workplaces.

“An employer might call up and say, ‘I have 10 workers who have gotten carpal tunnel syndrome in my offices in the past year. I’m concerned about it. What can I do?’” Hegeman said. “The two of us would go out to a job site and spend a hour or two consulting, looking at risk factors. Then we would write a report and submit it to the company.”

In most businesses, she said, ergonomic issues break down into two categories: office work and manual labor. If workers consistently get carpal tunnel syndrome on an assembly line, for example, she would analyze the height and speed of the line. In an office setting, the type and position of computer equipment could be the cause of a similar problem.

After analyzing all these risk factors, Hegeman and Grace will recommend changes in a final report. Then it’s up to the company to act on that report.

Companies can do all they want, Pettengill said, but in the end, people still have to make decisions for themselves. Staying active and in good physical health is a general key, but people also need to make an effort to avoid behavior like putting the weight of their entire arm on a few muscles or staying seated all day in front of a computer without breaks. And a well-designed chair does no good if it’s not adjusted to the correct height.

“I see this all the time in my patients who have lateral epicondylitis,” she said. “They could be seated in the most ergononically correct chair and still slump if they don’t have good postural habits.”

Other patients fall into the class of ‘weekend warriors’ who aren’t very active during the week but play hard outdoors on the weekend without first stretching and warming up appropriately, she said. And generally, once people develop stress injuries in one area, they are more prone to other musculoskeletal problems because they overcompensate in some way for the pain.

Of course, before they can overcome these problems, many people need to overcome their own stubbornness about bad posture or poor habits at work or play.
“We can explain these things to patients, but then they need to put them to use — and not just in the workplace,” Pappas said.

The term ‘repetitive stress,’ after all, carries a connotation of doing something over and over — and doing it wrong. Living and working pain-free, then, begins with ending that cycle.