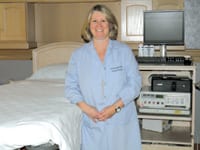 Most people associate having a new baby with joy and happiness. And although many new mothers struggle with exhaustion due to late-night feedings and can feel overwhelmed at times, the majority adjust to their new role with few problems.

But it can often be difficult to determine whether the tears that flow along with an infant’s are a sign of serious depression or just an adjustment to the tremendous responsibility inherent in becoming a parent.

“It’s life-changing when a mother has a baby,” said Alice Hodge, a registered nurse and parenting education coordinator at the Family Life Center for Maternity at Mercy Medical Center. “No mother is perfect, but new mothers are under a lot of stress due to expectations from others as well as themselves. They are expected to be Superwoman and be able to do everything.”

However, up to 20{06cf2b9696b159f874511d23dbc893eb1ac83014175ed30550cfff22781411e5} of mothers experience postpartum depression, or PPD, which is more pronounced and can lead to serious consequences if not treated. This depression differs from other types, in that women who struggle with it feel deep disappointment in themselves because of the societal belief that motherhood should be positive, natural, fulfilling, and wonderful.

“The myth is that everyone is so happy and women should be thrilled,” said Liz Friedman, program director of MotherWoman in Amherst and a member of the Massachusetts Postpartum Depression Committee.

Judie Brock, a certified nurse midwife with the Center for Midwifery Care at Cooley Dickinson Hospital in Northampton, agrees. “Postpartum depression is the most common complication of pregnancy and birth, but it’s been very stigmatized, so people don’t want to admit to it,” she explained. “The media depicts everything as wonderful, and it’s what MotherWoman calls the ’myth of the good mother’ — that the children are perfect and the mother has time to go to the gym, wear makeup, and do everything else.

“But the reality is that having your first baby is the biggest life change a woman can make, and things that happened in the past can impact the way she feels,” she continued, noting that a history of depression or physical, sexual, or emotional abuse can exacerbate the incidence of PPD, as can a difficult pregnancy or unresolved emotional issues. “Young mothers and mothers living in poverty are also at higher risk, as support is key to prevention, and they often lack that. Society says new mothers should be blissfully happy. However, not everyone is overjoyed after having a baby; there are issues that have to be dealt with.”

Experts agree that education about PPD should start long before a woman gives birth. “When women are pregnant, they are focused on labor and birth, so when they take the baby home — it’s a huge reality check,” Brock said. Most are not prepared for the changes that occur, which can include acute sleep deprivation and a lack of help.

“It can be very isolating,” she added, explaining that the stress of having to return to work along with finding child care adds to the pressure.

But the baby blues are not PPD. There is a constellation of symptoms connected with this type of depression, which can include frequent crying, feeling restless, lack of energy, sleeping and/or eating too much or too little, and feeling anxious, jumpy, or irritable.

“The mother may lose interest in caring for the baby, for her other children, or the family in general,” said Dr. Stuart Anfang, medical director of Adult Outpatient Psychiatry at Baystate Medical Center and associate professor of Psychiatry at Tufts University School of Medicine. “The baby blues are definitely not the same as postpartum depression.”

Although the degree of PPD can vary, “some women have said they have felt like they were encased in concrete,” said Anfang. “They are slowed down physically, feel very fatigued, can’t think well, or say they feel numb or detached emotionally. They may also have problems with memory or concentration.”

Although PPD can occur at any time during pregnancy or in the first year after birth, it typically is seen three to six months after the baby arrives. And despite the fact that it is common, many women and their families fail to recognize it or seek treatment. Some rationalize their feelings by saying they are tired because the baby keeps them up all night, and many suffer from silent shame and guilt.

“They think, ’I am a bad mother if I can’t take care of my child.’ But depression does not mean a woman is a bad mother. It’s not a character flaw; it’s a medical condition related to hormonal changes and the stress of having a newborn, and shouldn’t be minimized because medical conditions require treatment,” Anfang told HCN. “If you have hypertension or diabetes, no one would tell you not to seek treatment. And this is potentially just as challenging, because depression is a real illness.”

There are many reasons to seek help, and the baby’s development is one of them.

“A mother who is suffering from depression may be taking care of the baby’s physical needs, but is unlikely to be smiling at the baby or laughing with them, and babies need this emotional connection,” said Hodge. “Many mothers who suffer from PPD don’t bond with their babies, and we know that, if there is no connection, the baby can be challenged.”

Anfang concurs. “The mother is the first primary attachment the baby has. It knows the mother before birth and is familiar with her heart rate because it has been in her body for nine months. So there is a unique connection.

PPD can also impact a mother’s ability to nurture other children or support her spouse. “This type of depression affects the whole family,” Hodge said.

If there are older children in the home, caring for them is often delegated to the father, which increases his workload. In addition, they are often neglected after a baby is born since the attention is typically directed toward the mother and baby. “So dads can also become depressed. But men are less likely to ask for help and support,” Anfang said.

The effects can wreak havoc in a family. “Couples often say the first year after a baby is the most difficult one in their marriage,” Friedman said, adding the divorce rate rises during that time period. “And if there was substance abuse or domestic violence, the chances of it returning increase due to the stress levels.”

Statistics show that, if a woman has PPD after the birth of her first baby, she has a 50{06cf2b9696b159f874511d23dbc893eb1ac83014175ed30550cfff22781411e5} chance of experiencing it after another birth, which makes education even more important because early recognition of symptoms and treatment can mitigate negative outcomes.

“People with a history of depressive episodes after prior pregnancies have an elevated risk of becoming depressed again, so they need to be more vigilant, because the chances are it will happen again,” Anfang said.

Massachusetts legislators signed a new law into effect in August 2010 that requires the Department of Health to create recommendations and regulations regarding PPD screening and public education about the issue. They have yet to make recommendations, but Friedman says the legislation is important because many new mothers also suffer from postpartum anxiety disorders.

“If women who are giving birth receive education and support and are given the care they need during pregnancy, they can prepare and create as much support as they will need before, during, and after they have their babies,” she told HCN. “We need to educate women, give them resources, and help them understand their risk factors for depression, because it is underreported.”

MotherWoman does not refer to the condition as PPD, but calls it perinatal emotional complications. “We coined this language and are sharing it with professionals and mothers across the state,” Friedman said, explaining that the measure was undertaken to help reduce the stigma of the label ’PPD.’

Anfang said treatment is very effective, and new parents should not shy away from it. “It’s a tragedy for women and their babies who suffer alone with postpartum depression. People need to know that, no matter how bad they feel, it is very treatable, and many get better within a matter of weeks,” he explained.

The treatment for PPD can vary, depending on its severity. Some women do well simply by getting more support from friends or relatives. “Grandma might be able to take the baby so mom can take a nap or go for a walk,” Anfang said.

And although it can be difficult to reach out to friends and relatives, experts say it’s important. “It’s perfectly OK to ask for help if you are struggling,” Hodge said, adding that many single mothers lack support, which adds to their stress.

She advises grandparents and friends to ask the mother what she would like them to do, which may involve household chores or giving her a break so she can take a shower or go for a walk. “Taking care of a new baby is exhausting, both emotionally and physically.”

Women who exhibit signs of depression are advised to seek medical help because anemia or a low thyroid level can cause similar symptoms and need to be ruled out. “Women should talk to a physician about their options, which can include social support, medical interventions, and complementary therapy such as nutritional support, light therapy or acupuncture,” Friedman said.

Counseling and medication can also play a major role in recovery, although some women fear taking anti-depressants. “We have had decades of experience with them; millions of women have taken them, and they are quite safe, even if you are nursing,” Anfang explained. And the good news is that children are very resilient, so if the mother gets appropriate treatment, the baby will not suffer lasting effects.”

But women need to know that PPD can be triggered at any point in the first year after giving birth. “A colicky baby, difficult birth, or baby with any type of health problem, along with changes such as a move or loss or change in employment, can be risk factors,” Friedman said. “It’s a red flag if a mother can’t sleep when the baby is sleeping. If she hasn’t slept at all in 24 to 48 hours, you are looking at a potential crisis because sleep is the way the brain regulates itself.”

Mercy Medical Center will offer a day-long boot camp for new parents on a Saturday next fall to help them recognize what is normal and when to seek help, as well as providing information about caring for newborns and safety issues. For more information, call (413) 748-7295.

“If PPD goes untreated, it can impact the behavioral and developmental outcomes of the baby. But there is a lot of hope, and things can get better,” said Friedman. “Women who are experiencing symptoms need to know they can connect to help and recover.

“They should not suffer silently,” she said in conclusion. “There are concrete things that can be done to ensure that both the mother and baby are able to thrive.”