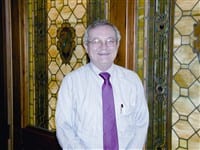 To the Rev. Joseph Bradley, the connections between health and faith had been evident long before he dedicated his career to strengthening them.

Bradley was Baystate Health System’s director of public relations during the 1980s and early 90s, but he always felt a call to the ministry and assumed he would answer it after his retirement. His answer would actually come much sooner.

“My wife and I were active church people, and I had been working in the hospital setting for 25 years,” Bradley told The Healthcare News. “I began to notice, in a way that I hadn’t seen before, certain parallels between the faith community and the health community, in the way they cared for patients.”

But Bradley’s goal of retiring from health care and entering the ministry down the road took an unexpected turn when a tragic loss brought some of those connections home.

Nine years ago, Bradley’s wife, Carol, was diagnosed with cancer after 25 years of marriage.

“We certainly weren’t prepared — nobody is, of course — for a life-ending diagnosis, which is what Carol had,” he said. “It became an ongoing experience of how our faith and our spiritual concerns meshed with our health concerns as we went through this treatment process.”

Carol Bradley died in 1995, and suddenly, those far-off ministry plans took on a new urgency. “It just seemed the right time to fulfill that calling,” he said. “It seemed pretty clear that I could help build bridges between the spiritual and medicine, between health and faith.”

So Bradley, who once dreamed of ministering in a church but now had another role in mind, enrolled in Andover-Newton Theological School in Newton, Mass. He graduated in 1999 and was ordained in the United Church of Christ that October.

He did begin his ministry life in the church setting, serving Second Baptist Church in Palmer for more than two years after his ordination. But he couldn’t stay away from health care, and in 2001, Bradley joined Hartford Hospital with a specific program in mind that he had been kicking around in his head for some time.

During what is known as a residency in clinical pastoral education, or a CPE, Bradley piloted a program ministering to outpatients and working with visiting nurse associations to see people in their homes.

“I wanted to provide spiritual care in order to help patients connect with their own faith communities through their illnesses,” he said. “This was probably the first program of its kind anywhere, in that it formally involved both the faith and health care communities. That was precisely its thrust.”

One problem with the modern health care setting, Bradley said, is that patients are shuttled in and out of hospital beds so quickly that it’s difficult for a chaplain to develop any kind of relationship with them. Further compounding the problem is that patients are returning home in a much more acute condition than in the past, needing not only health care services but, often, skilled spiritual care services as well.

After getting that program off the ground in Hartford, Bradley received a phone call from a former colleague, the Rev. Mary Lewis Webb, who had begun an interfaith chaplaincy program at Baystate in 1994 but had decided to leave her position. “Knowing I was completing my program at Hartford, she asked if I would help fill in here for awhile,” he said.

The answer was ‘yes’, and Bradley returned to Springfield in August to serve as interim staff chaplain.

Bradley has come on board just in time to take part in a reorganization of Baystate’s chaplaincy program that will eventually include an educational component in a CPE program such as the one in which he was enrolled in Hartford. A CPE supervisor will be hired, while an interfaith staff chaplain is expected to be brought on board as well, all in an effort to expand the potential of the program Webb began eight years ago.

However, “for now, the patient setting is what has the immediate need,” he said. “My personal goal is to meet the needs of outpatients and the patients being cared for at home.”

Such services are more important than they have been in years, with the Joint Committee on Accreditation of Health-care Organizations requiring hospitals to offer spiritual care services. But Bradley, from his vantage point as a hospital administrator, had seen that need years earlier.

“I had been thinking more along the lines of entering a parish ministry in the late ’80s and early ’90s, but after Carol’s sickness and death, I realized I knew something about health care and hospitals, and I had an opportunity to foster this growing understanding of the spiritual connection to health care.”

Growing is the right word. Bradley said there are more than 300 articles in medical literature that point to some kind of positive effect on a patient’s overall well-being that comes from the spiritual side.

“There’s good evidence that it’s taken seriously,” he said. “Articles on the importance of this connection have increased dramatically. But another interesting trend is that a lot of the work being published is coming from physicians and nurses and not, as you might expect, chaplains.”

Bradley stressed that there’s a difference between a parish minister and a hospital chaplain when it comes to leeway on expressing religious preferences. Although ordained in the United Church of Christ, he was trained as an interfaith chaplain, and he takes his role serving the entire hospital community seriously.

“While I certainly have my own understandings and beliefs, I know and recognize the needs of other people, whether they have a formal religion or a more informal spiritual understanding,” Bradley said. And, like other area chaplains (see related story, page 12), he respects the spiritual place from which each patient comes.

“I can help put them in touch with resources in the community,” he said, “but what I mainly provide for them is a listening space and a listening person.”

The Rev. Joseph Bradley, who, instead of jumping from health care to the ministry, simply joined the two careers, sees an entire community of people in need. And if they’re leaving the hospital too soon to make a connection, then he’ll create that listening space — and healing place — in their homes.

And from what he hears from colleagues and reads in medical literature, others are making similar connections — and none too soon.

“Empirically, I see a broad opening to an understanding between the work of the spirit and a person’s healing.”

In the end, it’s that healing that matters — one person at a time. 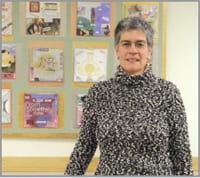 An Illness of Secrecy ´ Walden Offers Hope, Help to People with Eating Disorders