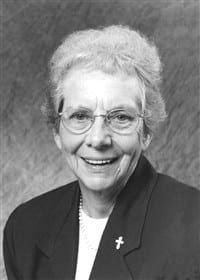 The Catholic Health Assoc. of the United States (CHA) presents the Lifetime Achievement Award each year in recognition of lifelong service to Catholic health ministry. CHA is the national leadership organization representing the Catholic Health Ministry.

Sr. Caritas started her career as an administrative dietitian nearly 50 years ago and eventually became a hospital administrator. She was the president of the Sisters of Providence in Holyoke from 1969-77. As president of what was then Mercy Hospital in Springfield, she expanded the facility’s range of services and extended its influence throughout the region. During 1977-93, she helped establish programs such as Healthcare for the Homeless and created what is now the Weldon Rehabilitation Hospital. In recognition of her achievements, Mercy Medical Center established the Sr. Mary Caritas Cancer Center.

Sr. Caritas has donated her time and energies to state and national issues as well as local concerns. Her responsibilities have ranged from chairing the state’s blue ribbon committee on long-term care trends to chairing the Bondi’s Island Task Force, which sought to eliminate objectionable sewage odors emanating from that facility.