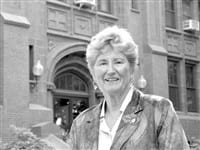 There’s a big difference between attending school for six years and eight years. Administrators of the area’s busiest allied health program are wondering whether the change is worth the effort.
At issue is a decree by the American Physical Therapy Assoc. (APTA) that college physical therapy programs must be offered at the doctorate level by 2008. Mary Healey, dean of Springfield College’s School of Arts, Sciences, and Professional Studies, knows that involves far more than assigning some extra classwork.

First of all, the longer the program, the more it costs a college to educate a student, from the individual attention necessary to the expense of the equipment used — as it stands now, hospital training costs an average of $9,000 per student. Second, as Healey said, physicians who must work with PTs in the hospital setting feel like they’ll lose some control over their allied health partners if too many new therapists use their advanced degrees as a step toward opening autonomous businesses.

“Doctors don’t understand the need for it,” Healey said. “They say that the people coming in after four or six years are eminently qualified for the work they do.”
That debate is just one way colleges are battling to keep their programs relevant in the face of a rapidly changing world of science and medicine. Even at a school that sends as many allied health workers into the field as Springfield College does, summertime means revamping, updating, and wondering where the next change will come from.

Take the example of occupational therapy. It had been developed over the years into one of Springfield College’s premier allied health programs, yet it took just one decree to derail much of that progress — namely, the decision by Medicare and Medicaid not to reimburse for occupational therapy, forcing many hospitals to lay the burden for that type of work on physical therapists — and leaving many OTs and students with rapidly shrinking career options.

“The job market crashed, and I don’t see it getting any better,” Healey said, noting that, while recent graduates of the Springfield program have found jobs, OT enrollment is way down at all schools that offer it.

Now comes the advocacy by APTA for all PT programs to offer a doctorate in physical therapy, a move that would require serious reshaping of current programs. According to the association, 58 colleges already offer a doctorate track, while another 85 have committed to establishing one by 2005.

APTA has several rationales for the shift: the modern practice level requires a breadth and depth in education not easily acquired in the typical master’s program; society expects fully autonomous health care practitioners to be clinical doctors; and many existing master’s PT programs already meet the requirements for a clinical doctorate, yet students are denied the degree most appropriate to their program of study.

“Here,” Healey said simply, “the jury is still out.”

But allied health fields are changing in other ways as well, she said. For instance, the rehabilitation department has developed a communications disorders program in recent years, sending a wave of audiologists into the medical marketplace. Programs focusing on substance abuse and learning disorders continue to grow, while work adjustment training — a field related to occupational therapy that is focused on getting rehab patients back into their work routine — has taken off in recent years as well.

Meanwhile, the college’s athletic training program continues to see career growth across the country. According to Dr. Charlie Redmond, chair of the Department of Exercise Science and Sports Studies, an athletic trainer works with physically active people through injury prevention, emergency care, and rehabilitation. As an example, he or she is the first person on the field when an NFL player doesn’t get up after a play.

Of course, with fewer than 150 major professional sports teams in the United States, job growth is not occurring in that area. But 99{06cf2b9696b159f874511d23dbc893eb1ac83014175ed30550cfff22781411e5} of colleges also employ athletic trainers. Meanwhile, many high schools employ them part-time, contracted through a clinic such as HealthSouth.

“The field evolved out of increased physical activity at the turn of the century,” Redmond said, “and it’s been a professional association for less than 50 years.”

owever, he added, if demand ever increased at the high school level — a trend that would probably have to follow a strengthening of the economy — the market could explode, making the field one of the most attractive jobs in allied health. As it stands, he expects to field 50 to 60 calls this fall from Northeast schools looking for athletic trainers.

Healey said she recognizes the need for advanced study in allied health fields, particularly in the sciences. Therapists are often the front line of defense in recognizing the first signs of scoliosis, Lyme disease, immunodeficiency, or any number of other health concerns. Besides, a quick look at any newspaper or magazine demonstrates how much science and medicine are changing.

The length of the current Springfield College programs attests to that phenomenon: physical and occupational therapy, as well as the physician’s assistant track, are already offered in master’s-level programs.

Real-world experience is also a major focus, both planned — such as the use of the school’s state-of-the-art cadaver lab — and unexpected, as when paramedic and emergency medical services management students backed up Connecticut ambulance crews while the workers were in Manhattan just after Sept. 11.

For therapists, it’s impossible to gain too much knowledge and experience, Healey said. On a daily basis, more than ever before, therapists are dealing with cancer patients, are expected to know about nutrition and other lifestyle health factors, and are working in a remarkable variety of settings, from hospitals to assisted living facilities to the patients’ own homes.

“It’s a changing profession, and that has put a whole new set of pressures on students,” Healey said.

With an aging population and rapidly advancing science converging, those pressures don’t look to ease up anytime soon — and neither do the dramatic changes happening on the front line of higher education.

Separating Myth from Truth on Fibromyalgia