NORTHAMPTON — Cooley Dickinson Hospital President Craig Melin says a series of computer and medical equipment upgrades to be funded through a $20 million bond issue isn’t about making the hospital more competitve.
“They’re designed to improve the quality of care we provide to the community,” he told The Healthcare News, adding that by putting the proper resources in the hands of its medical personnel, the hospital’s competitive concerns should essentially take care of themselves.

CDH’s bond issue, part of a larger $140 million issue being undertaken by the Dartmouth-Hitchcock Alliance, of which the hospital is an affiliate, will fund a $2.7 million upgrade of the facility’s 18-year-old computer network, a $2.3 million magnetic resonance imaging machine, and a $2.4 million addition to house that equipment, among other items.

Melin said the investments are part of the hospital’s ongoing efforts to put its current fiscal strength to work to improve the quality of care it provides. Indeed, CDH is one of the few hospitals in the state that have finished with positive operating margins in the past few years, he said, and the hospital is committed to putting those surpluses toward additional capital improvements.

A decade ago, the hospital was foundering financially, near the brink of collapse, Melin recalled. After turning the ship around with a program designed to create new operational efficiences and revenue sources, CDH has dedicated itself to finding ways to capitalize on its solid financial footing to improve patient services, he said.

The upgrades planned with the tax-exempt bond issue — the hospital’s first major borrowing in more than five years — enhanced services and also allow the various departments to function more efficiently.

Elise Ames says the hospital’s workhorse computer system has been reliable and has a number of solid components. However, those individual systems didn’t talk to one another very well, she said, adding that better integration and improved functionality are at the heart of the hospital’s new system, which should be operational in about a year.

Ames, CDH’s director of Information Services, chaired a committee of more than 25 people that researched a number of systems designed for use by health care providers and, after nearly a year’s work, chose a product made by San Rafael, Calif.- based Quadramed.

The new network will allow many departments to consolidate individual systems, Ames said, while it will greatly enhance communication between departments. It will also provide improved tracking and storage of patients’ medical records.

The new system will have modules that permit nurses to conduct online documentation of vital signs, and it will also provide such benefits as automated quality assurance in mammography and better medication cross-checking, which is a benefit for both physicians and patients.

The hardware for the system has been ordered, she said, adding that she and others at the hospital will soon commence training on the new equipment. They will then set up the system and train other individuals within their specific departments.

Other capital improvements to be funded through the bond issue include the new MRI machine and other imaging equipment, as well as a 9,000-square-foot, two-story addition to house it.

The hospital has been using a mobile MRI unit for the past several years, said Melin, and steadily increasing its use, to the point where a permanent unit was needed. By timing its purchase to coincide with other MRI aquisitions by the Dartmouth Hitchcock Alliance, CDH can take advantage of that system’s immense buying power, he said. 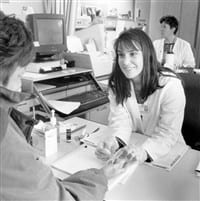 The Physician Workforce: One Leg of a Three-Legged Stool