The state-of-the-art community, due for completion in early 2008, will consist of three distinctive neighborhoods: one for independent-living residents, a second for assisted-living residents, and a third for individuals who require memory care. Each neighborhood will be designed specifically for the lifestyle of its residents and will feature its own common areas and dining facilities.

Keystone Commons does not require a large entry fee like many senior living communities and will offer its apartments on a month-to-month rental basis for both ongoing residency and respite stays, said Victor J. Field, partner in the Keystone Commons project and current member of the Ludlow Board of Health.

“Interest in Keystone Commons has been quite enthusiastic, and a number of apartments have already been reserved for both independent living and assisted living,” he said.

Over the past decade, Keystone Senior, LLC has developed and managed 10 senior living communities, including Key-stone Woods located in Springfield.

The Keystone Commons on-site sales and information center is scheduled to open in mid-March. 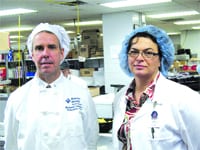