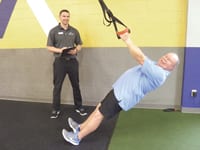 People who have had surgery or injure themselves often don’t know what to do when their physical-therapy sessions end. They want to continue making progress, but are often at a loss regarding how to reach their personal goals, since they don’t want to reinjure themselves and lack knowledge about what exercises they can do safely, given their limitations.

In fact, said Donna Durocher, it’s a common problem. “Insurance companies often limit the number of sessions a person can attend,” explained the senior physical therapist and clinic manager at Attain Therapy + Fitness in East Longmeadow. “We provide patients with as much education as possible before they are discharged and tell them it’s very important to continue to work on their strength and mobility. But when they get home or go to a gym, many are unsure about what they should do or avoid doing.”

Attain has created a unique program to address that gap. It’s called the Bridge, and allows people to continue to improve and get into shape. 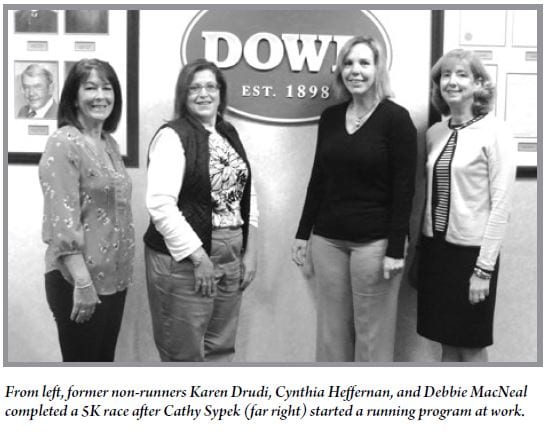 “It offers the next level of care after physical therapy to ensure continuation on the road to recovery,” Durocher said. “It’s a good transition to help people move to the fitness level they hope to achieve.”

The program consists of six sessions and costs $150, which begins with a comprehensive screen to determine the person’s fitness level. When that is complete, the trainer works closely with the patient and their physical therapist to tailor a program that meets their needs and ensures they reap optimal benefits and can meet their goals.

Attain co-owner Terry Ditmar says every trainer at Attain has a master’s degree either in strength and conditioning or exercise physiology, and is well-versed in working with the post-rehabilitation population, which sets them apart from many of their peers.

Indeed, Stephanie Davsky says the Bridge program made a significant difference after she had bunion surgery last February. “I was turning 50, and when I finished physical therapy, I was feeling sorry for myself. I wanted to lose weight and get in shape, but didn’t want to go to a gym,” she said, adding that she was leery of reinjuring her foot and had never worked out before.

When her physical therapist suggested she enroll in the Bridge program, she decided to try it, and it proved so beneficial, she has continued to work with a personal trainer in the East Longmeadow facility.

“They take all of your limitations into consideration,” she said. “They made sure I did exercises to strengthen my foot without hurting it, and helped me with a diet. They also make you feel really good about yourself and work with you to accomplish everything you want to do. If I hadn’t gone through the program, I might have tried doing a little exercise at home, but that would have been it.”

For this issue and its focus on fitness and nutrition, HCN takes an in-depth look at the Bridge program and how it certainly lives up to the name it’s been given.

Hector Pope has participated in the Bridge program twice, and also continues to work with an Attain personal trainer. He underwent knee-replacement surgery in the summer of 2014 and a second procedure last spring.

His surgeon told him it was important to strengthen the muscles around the knee prior to the first surgery. “So I did a pre-Bridge conditioning program at Attain and met twice a week with a personal trainer,” said the 64-year-old Baystate Medical Center emergency-room doctor, adding that, although he and most other people who have knee replacements typically have very limited motion before surgery, “anything you can do ahead of time makes it easier.

“It’s all about preparation before, therapy afterwards, then continuing to be active; you need to build up your muscles again,” he noted, explaining that he didn’t realize just how important pre-conditioning and post-surgery (Bridge) training were before he had his knees replaced.

The Bridge program made recovery easier and got him in the habit of doing strengthening and flexibility exercises. “I could have gone back to work in nine weeks instead of usual 12. You have a partner helping you, and everyone here puts themselves in the client’s shoes,” he said. “It made all the difference and opened up a whole new world to me, and because I am older and don’t want to reinjure myself, I am going to continue this for the rest of my life.

“Most people need some guidance, and it’s worthwhile to have weekly reinforcements,” he went on. “You need to keep exercising if you want to maintain your range of motion and have a good outcome.”

Although Pope and Davsky have chosen to continue with one-on-one training at Attain, many Bridge graduates leave and resume their normal lifestyle, while others choose group classes in the facility or return to their own gyms after gaining confidence and strength.

The program was conceptualized in 2008 after Attain took over a large space in East Longmeadow that had been used by a national sports-performance franchise. It had AstroTurf fields, a basketball court, and an indoor, 60-meter track, and initially the programs appealed to the athletic population. But the fact that East Longmeadow is not close to a major metropolitan area with a sizeable population of athletes made it difficult to continue to offer performance programs on a large scale, Ditmar said.

“We realized the majority of the general population who really needed guidance had other issues keeping them from their fitness or activity goals, such as back pain, knee problems, or chronic diseases like diabetes,” he told HCN. “So we began providing medically guided programs for patients who had exhausted their insurance or were graduating from physical therapy and wanted to continue their progress and maintain a healthy lifestyle.

“We learned that people were often overwhelmed when they went to the gym on their own, even if they had some help from trainers,” he went on. “And our blend of physical therapists, strength coaches, and exercise physiologists provided something not found elsewhere.”

He added that, although Attain’s Bridge program is offered at all of its locations, the East Longmeadow facility has the fitness equipment needed to conduct group classes, programs, and personal training.

The program starts with the aforementioned functional-movement screen, which is conducted by a strength coach.

“We look at how well the person can perform basic movements, such as a squat, which is needed in everyday life to sit and stand up,” said Trevor Dorian, head strength and conditioning coach. “If someone can’t do basic movements well, they will compensate on a daily basis, which can lead to imbalances or an acute injury.”

When the assessment is complete, a specific program is developed to target the client’s needs, and he or she attends five 30- to 60-minute sessions, with the length dependent on how much they can tolerate. During each meeting, they do exercises specifically chosen for them, based on recommendations and input from their physical therapist combined with the person’s goals.

“Sharing information about someone’s health condition is important to the success of this program. It’s not always easy to do in this day and age, but because we work with our own physical therapists, for us it’s seamless,” Ditmar said.

Elders also often take advantage of the program. “Someone may have an arthritic knee, and even though their pain is brought under control, they don’t know what exercises they should do. And it can be overwhelming for them to go to a gym,” he told HCN. “But by the end of five sessions, they are confident enough to continue training on their own. It’s especially important for this population because seniors who give up exercising can lose their strength and independence. But this can help prevent that from happening.”

Attain also offers small-group classes with six to 10 participants. The personal attention, key to the Bridge program, continues in each class as trainers keep a close eye on each person.

“We correct their form and keep them motivated,” Dorian said. “What makes us different than a regular gym is that everyone is supervised. We don’t have a lot of machinery and are focused on proper biomechanics, so when a coach demonstrates a technique, no one else does the exercise at the same time. We deal with all types of limitations and can regress or make adjustments to someone’s prescription, even if it’s in a group setting. People can also e-mail or call us if they tweak their back or do something bothersome at home. We want to make sure that they are exercising correctly to minimize the risk of injury.”

“Safety is a high priority,” Ditmar agreed. “But our coaches are educated and have a great deal of experience working side by side with physical therapists. They’re members of a team.”

He added many people live with chronic pain that could be alleviated.

“They don’t realize, if they worked with a physical therapist, then transitioned to a strength coach, they might be able to get rid of it,” he explained, noting people can call and make an appointment to get an assessment done, which in some cases has led to physical therapy or one-on-one training.

But no matter how or why they get started, the focus is always on the individual’s lifestyle and situation.

“Our Bridge program is a way to extend the progress you have made and give you confidence to continue exercising independently in a way that keeps you safe,” Ditmar said, “so you can progress to the next level.” 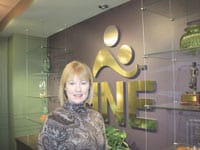 Where There’s Smoke… As E-cigarette Sales Escalate, So Too Does the Controversy