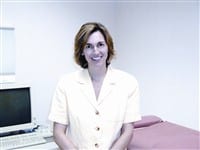 As a specialist in women’s imaging, Dr. Lisa Loring gets to treat patients who want to get better — and that makes a difference, she said.

In other types of interventional radiology, said Loring, medical director of the Berkshire Medical Center Women’s Imaging Center, patients are less likely to take their own health seriously. “They can’t wait until they can get outside and have a cigarette.”

When dealing with women’s issues such as breast cancer, however, “the patients are generally healthy. This is a bump in the road for them, and they’re very interested in keeping healthy. I like treating people who want to get well.”

As someone who chose her field based partly on its heavy patient contact, Loring is also experienced in treating women whose conditions are not mere bumps in the road, but life-threatening events.

But as technology improves and women become more aware of preventive screening, Loring continues to see dramatic improvement in how early cancers and other conditions are detected and treated. And, as Berkshire Medical Center (BMC) prepares to open its new women’s imaging facility in July, she will no doubt be witness to even greater changes in her field.

As Loring told The Healthcare News, she wants to bring not only good medicine but a dose of comfort to patients facing times of anxiety — and that begins with the personal touch. “I don’t want to just stare at film all day like some doctors,” she said.

That emphasis on one-on-one care isn’t surprising coming from someone who wanted to be a doctor from an early age.

“It was just a childhood dream to be a doctor,” said Loring, who grew up in Lee. “I’m one of six children, and nobody in my family is in medicine; my dad worked in a paper mill. I just applied myself in school and kept my grades up so I could be a doctor.”

Loring first earned a Pharmacy degree from the Mass. College of Pharmacy, during which time she was able to experience clinical rotations in a hospital setting — and that fueled the fire even more. “I liked the hubbub of the hospital. I said, ‘I’ve got to do this.’”

Still, it took some time, as Loring worked for two years after graduating from pharmacy school, earning enough money to enroll in UMass Medical School. She received her internship training in General Surgery at BMC, but she gravitated toward radiology partly because it offered the opportunity to make diagnoses and communicate with people, many of them trauma patients, during their most anxious moments — in short, to be immersed in that “hubbub.”

Loring served a fellowship in breast imaging at New York’s Memorial Sloan-Kettering Cancer Center and was also chief resident in Radiology at Hartford Hospital. Having met her husband in the Berkshires, however, she returned to the area, joining Berkshire Physicians and Surgeons in 1997 and then moving on to Berkshire Radiological Associates in 2000, practicing at BMC and Fairview Hospital.

That practice is no longer affiliated with those hospitals (see related story, page 15), but Loring remained with BMC in its new partnership with the Advanced Berkshire Medical Imaging practice, as well as preparing to lead the women’s imaging center now being built.

Loring is especially proud that the center, which will incorporate mammograms, ultrasound, and bone-density screening in one place, has been designed with the needs of patients in mind.

The hospital assembled a focus group of more than 20 former women’s imaging patients to get their opinions on everything from privacy matters to décor. Through a questionnaire and several sit-downs with the focus group, the center’s designers had specific ideas intended to create a spa-like setting, rather than a wing with a clinical feel.

Because a few men develop breast cancer as well, there’s a separate entrance for them, Loring said, while the focus group also dealt with matters as minor as what colors would be most soothing.

“This is our community, and we went to the community and got their input,” Loring said. “Our philosophy is, if a person comes to us with a problem, we want to make it as easy as possible for them.”

On a more personal level, Kathy Hart, a registered nurse and program director of the center, will coordinate each patient’s regimen of care. “There’s a lot of hand-holding,” Loring said, “but sometimes people need it.”

Patients also need quality care that spares as much trauma as possible, she said, and that’s where radiology has made some significant steps over the past decade.
“Image quality is better, so the dose is much lower than what they used to get,” Loring said. “You used to get a white blob on the screen, and now you can see through the tissue, in most cases, and can diagnose a problem earlier.”

Furthermore, the emergence of percutaneous biopsy, which uses a needle, has spared many women from having to undergo a traditional surgical excisional biopsy, which is far more invasive.

“There’s no scar and no deformity, and that’s huge,” she said. “A lot of these problems are benign, and people have gotten deformity for something that’s benign. What a travesty.”

Breast MRI (magnetic resonance imaging), which Loring calls “another weapon in the arsenal,” is an emerging technology in place at Berkshire Medical Center. The non-invasive procedure allows a radiologist to see inside the breast from multiple angles without radiation; it’s being used in concert with other procedures.

Finally, a computer-aided detection system is in place to provide a second pair of eyes, so to speak, to a doctor studying a mammogram. By highlighting possible masses on the image, the system can increase detection rate by 10{06cf2b9696b159f874511d23dbc893eb1ac83014175ed30550cfff22781411e5} to 15{06cf2b9696b159f874511d23dbc893eb1ac83014175ed30550cfff22781411e5}, Loring said. “It definitely helps people who are less comfortable reading a mammogram.”
Other advances on the horizon include digital mammograms, which don’t increase detection rate but do increase the number of patients that can be seen in a day, since the images are produced in a few seconds, as opposed to 90 seconds with traditional film.

It’s not only technology that has become more effective in detecting cancers and other problems, Loring said. Patients have become more savvy as well, doing their own research and arriving with more questions than ever. “They’re asking a lot of interesting questions, and that’s fun for me because it makes me feel like I’m helping them.”

Throughout all the technological changes and the design details that will grace the new women’s imaging center, Loring said the most important facet remains a personal commitment to each patient, whether she requires five minutes of a doctor’s time or an hour or more.

“I ask, how would I want to be treated if I woke up one morning, took a shower, and found a mass? I’d want to be seen as soon as possible,” she said.
“I believe in the golden rule, of treating people how I’d want to be treated. But it can’t just be me; it has to be the whole team. We have to treat patients like they’re our mother or our sister.”

And, as Loring has seen, those mothers, sisters, and daughters — and men as well — have plenty of new tools available to keep them healthy.