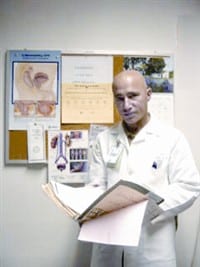 To Dr. Kirby Juengst, staying open to new ideas is more than a catchphrase. It’s how he got into medicine in the first place and how he maintains his career today.

Originally from New York City, Juengst, a staff urologist at Wing Memorial Health Center in Palmer, earned his medical degree at UCLA and interned for six years at the University Hospitals in Cleveland. But in the early 1980s, the East Coast came calling again — specifically, Western Massachusetts.

“I grew up in New York and missed the change of seasons,” he said of his arrival in Massachusetts in 1984. “My wife and I interviewed at Baystate Medical Center and we liked the positions, so we stayed.”

Juengst’s wife, Dr. Karen Ferroni, is now the director of Mercy Medical Center’s Family Life Center, while Juengst himself moved to Wing, serving in a part-time capacity until he went full-time three years ago. How he ended up in medicine and how he chose urology as a specialty, he told The Healthcare News, are somewhat parallel stories of keeping an open mind.

“I was a chemistry major in college,” Juengst said. “One day, I was studying physical chemistry and examining the circulatory system. On that one day, I began to see medicine as a career possibility.”

In medical school, he was equally undecided about his future. “They brought in specialists to teach about their fields,” he recalled. “I thought all urologists did was prostates. I found out they did a variety of surgical procedures, and I thought that was interesting.” In fact, he said, half of his patients are women with different health issues. “It’s a mix of both surgery and office work. At the same time, it is a somewhat limited field, so it’s easier than some other fields to stay abreast of current developments. This allows you to develop a level of expertise.”

Despite the rather sudden nature of how his career came together, Juengst doesn’t regret the decisions he has made. “Clearly, medicine is an interesting field. You get to do something constructive in your life. You also get to keep moving. You stay fresh, learning and relearning.”

Furthermore, getting recertified every 10 years keeps him on his toes as well. As it happens, Juengst is facing his own three- to four-hour exam in November. “They ask very specific and involved questions,” he said. “You have to assume they’ll ask everything, including things you haven’t seen it years.”

What kinds of questions might he see in November that would not — or could not — have been on his 1993 recertification? Juengst explained that, since then, the biggest area of change in his field is in the treatment of enlarged prostates. “One big change is that we can now treat enlarged prostates with oral medicine, when it used to be solely a surgical treatment. Now, 80{06cf2b9696b159f874511d23dbc893eb1ac83014175ed30550cfff22781411e5} are treated with medications. There are also new office procedures.”

Juengst noted that prostate cancer rates are dropping. “We are finding prostate cancer earlier, treating it earlier, and we are seeing increased survival rates,” he said. “We find 75{06cf2b9696b159f874511d23dbc893eb1ac83014175ed30550cfff22781411e5} of prostate cancers are based on elevated PSAs (prostate-specific antigens).” These are enzymes made by the prostate, he explained. In cancer patients, there is often an increase in PSAs, and a greater-than-normal amount often gets absorbed into the bloodstream.

“When we detect that, we order more workups because elevated PSAs are also common for other reasons such as infection and even regular growth. However, this is an effective indicator tool that we should investigate further. Many cancers are discovered through this means. Prior to this, the most common way of early detection was the standard prostate exam.”

Another new procedure is the use of laparoscopic (non-invasive) surgery on kidneys. “Ob-gyns have been using it for years in their field,” Juengst said. “Surgeons have also used it on gall bladders. It is now becoming standard for a non-complicated kidney cancer.”

Surprisingly, even in this month of bicycling’s Tour de France, the Lance Armstrong story has not led to a marked increase in the detection of testicular cancer. Armstrong, the four-time defending champion, survived testicular cancer and has become a spokesperson in the fight against the affliction. Juengst cited a number of reasons why that form of cancer remains a problem.

“First of all,” he noted, “it is very rare. Also, it tends to hit young men in their late teens to late 30s. Although older men can be afflicted by it, it is not as common. It is a cancer that is often ignored and is not usually caught until it spreads, just like in Lance Armstrong. He had the cancer spread to other parts of his body before they found it.”

The cause for this, however, lies not in the inability of medicine to detect the cancer, but rather in psychology. “Young men just don’t want to know,” he said. “They’re obviously very sensitive about it.”

As an avid outdoorsman, Juengst often uses athletes such as Armstrong to make points about medicine and taking care of the body. However, being on call or in his office as much as 120 hours a week, he has to find a way to balance the career and the recreation. Furthermore, he imposes a restriction upon himself that limits his outside activities. Hospitals require doctors to stay within, at most, an hour away in case of emergencies. Some hospitals require an even shorter time period. Juengst restricts himself to half an hour.

“In urology, especially,” Juengst told The Healthcare News, “my calls are not going to be life-threatening, but there are some very, very uncomfortable situations that do come up, such as nurses having trouble inserting a catheter into a patient. You want to decrease the time in order to decrease the discomfort for the patient. I’d rather get there as soon I can and get the patient some relief. If I was 45 minutes away, I’d worry that I should have stayed closer.”

As a result, to train for the Hartford Marathon a couple of years ago, Juengst had to be a little creative. “I ran a three-mile course around Whiting Reservoir,” he said. “I had to run seven laps. Ten miles out and ten miles back would have been more interesting, but you have to adapt.”

Adapting. For Dr. Kirby Juengst, that’s what life is all about.

Mature Businesses Companies Focused On The Needs Of The Elderly Offer Compassionate, Diverse

Eliminating Disparities in Our Healthcare System

Wing to Be Smoke-Free June 1