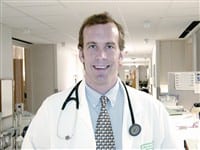 Doctors say they want to meet patients where they are. Dr. Peter Elsea understands that concept in a more dramatic way than most.
Before becoming a hospitalist at Mercy Medical Center, Elsea traveled a road that took him to New Zealand, Kenya, and the Navajo lands of Arizona, where he learned firsthand how cultural mores affect the practice of medicine.

“You can’t say to a Navajo person, ‘if this doesn’t happen, you will die,’” he said. “They feel you’re cursing that person, and you’ll be known in the community as the doctor who killed someone. Instead, you need to tell them what they need to do to get better, and let them infer the rest.”

Such lessons serve Elsea well in his new role in the Mercy Inpatient Medical Service (MIMS), a hospitalist program in which 12 doctors rotate on site, seeing hospital patients exclusively.

The idea is to bring a more personalized, attentive brand of care, and Elsea said his experiences in different cultures, working under different medical systems, have instilled in him the sort of one-patient-at-a-time sensitivity being a hospitalist requires.

“I wanted to join a group with a high standard of care and consistent practices, with up-to-date medicine and good camaraderie with the staff and community physicians,” he told The Healthcare News. And the path that led him to Mercy’s door this past January has been a circuitous one, to say the least.

Elsea’s interest in other cultures predated his decision to become a doctor. In fact, as an undergraduate at the University of Virginia in the mid-1980s, he studied medical anthropology and social philosophy, delving into the difficulties in meeting the medical needs of culturally diverse populations.

After spending two years in California working with a mountain search and rescue group and running an educational program in the Napa school system, Elsea returned to the East Coast in 1991, as a medical student at the University of North Carolina. During his years there, he found time for work abroad in New Zealand, conducting a study of the Maori tribe.

That was when he got his first up-close look at a culture that treats death and the spirit world in a way that might seem odd to mainstream Americans. For example, mental health is perceived differently among people who routinely accept visualization of — and visitation by — the dead, he said.

During his med-school days, Elsea also traveled to Kenya to work at a rural hospital and deal with malnutrition and malaria. Despite the difference in resources between an African hospital and an American one, he said, the challenge to providers is the same: “you have to find ways to get people the things they need.”

After a stint at Baystate Medical Center in the late 1990s, Elsea hit the road again, this time to Chinle, Arizona, the heart of Navajo nation in America, where he worked in internal medicine, pediatric care, and emergency medicine. It was here that he further honed his sensitivity to the differences between cultures — such as the way death is discussed.

“If you don’t factor in the specific cultural needs, everything you do medically will fall apart,” he said, recalling a few instances where medicine men visited hospital rooms and conducted lengthy ceremonies involving smoke, feathers, and dancing.

“It is limited,” Elsea said of the care in Chinle. “It’s not space-age medicine. But people got what they needed. I’ve seen many more people here who do not have access to health care than I ever saw in Navajo country, where I worked.”

Elsea — who noted that “it was rewarding and also frustrating to work under one health care bureaucracy” — said he’s not sure how well a single-payer system would work on a nationwide scale, particularly given the negative perception many people have of existing government bureaucracies.

“It would involve a huge tectonic shift in the health care system,” he said. “Can the system be reinvented in a meaningful way? I don’t know, but I hope so.”

At Mercy, Elsea feels like he works in a program that at least attempts to meet patients’ needs in a more attentive manner than at facilities without full-time hospitalists.
He added that hospitalists are often able to educate patients because they see them at a vulnerable time. “When patients are present in a hospital, they’re more aware of what their health issues are and what they need to do to change,” he said.

Mercy’s hospitalist program, which pioneered the concept in Western Mass. in 1993 and celebrates its 10th anniversary this month, has grown in just the past 18 months, from seven doctors at the end of 2001 to 12 today. That expansion mirrors the overall growth of the field, which boasted a few hundred physicians in 1995 and several thousand today. According to the National Association of Inpatient Physicians, by the time the growth levels off, the number of hospitalists will reach about 20,000 — equal to the current number of cardiologists.

Simply put, hospital patients don’t have to wait until physicians have off-hours in their own practices to be seen; someone is available at all hours of the day.

anwhile, proponents of the concept say, patients are more comfortable with what they see as a continuum of care, not just scattered visits.

“This is a time when patients’ psychological needs are high, not just the medical needs,” Elsea said. “I like being able to spend time with the patients.”

Such time is a thing of value in medicine today, he said, especially as proposed budget cuts threaten to further stress a system that already reimburses providers well below the actual cost of care. “The system is stuttering and faltering,” Elsie said. “It won’t tolerate much more.”

Just like Navajo doctors when speaking to patients, no one here likes to admit out loud that the health care system is ready to collapse under the strain. But even as the pressure mounts, Mercy’s hospitalists continue to bring care and comfort to their patients, 24 hours a day.

With MIMS, we see patients with often critical problems,” he said, “and provide focused medicine.”

And, despite the challenges, they’re doing it one patient at a time.

Is Your Practice Properly Accounting For Inventory And Prepaid Supplies? 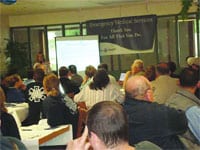