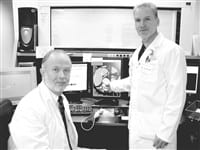 Dr. Robert Geehr said he long ago recognized the need for outpatient radiology services in the Berkshires area.
“It was apparent to me and many other people that we needed a facility where people could come on an outpatient basis, make an appointment, and know they could count on that time,” he told The Healthcare News. “We’ve been talking about this for nearly two decades now.”

And while administrators at Berkshire Medical Center (BMC) would generally nod their head in agreement with that assessment, he said, they never moved forward to create such a facility.

So Geehr and some of his colleagues at Berkshire decided to do it themselves.

In April, following months of controversy, Geehr and colleagues Jerome Auerbach and Stuart Masters opened Berkshire Radiological Associates (BRA) on North Street, only a few blocks from the medical center.

The clinic has been opposed by the medical center from the time it was first announced last summer, said Geehr, who wanted to create a joint partnership with BMC. Those plans never materialized, and BMC would eventually sever its ties with its radiologists and effectively block BRA’s efforts to secure magnetic resonance imaging (MRI) services.

The discord with the medical center is in the past, said Auerbach, who told The Healthcare News that he would prefer to focus on the present and the future tenses. He said the clinic is doing exactly what it was designed to do — provide area residents with a level of convenience they never had before.

“Patients have told us they needed something like this, a clinic that’s quiet, efficient, and convenient,” he said. “And referring physicians have said the same thing. We provide same-day appointments and, with the most advanced imaging technology available, can put reports in the hands of the treating physician only hours after the appointment.”

And the clinic provides something else, said Geehr — choice.

“That’s something that was always missing in this area … people didn’t have choices,” he said. “When they do, I think it’s better for everyone involved — service is always better in an environment where there’s choice.”Image Is Everything

As he gave The Healthcare News a tour of the clinic, Auerbach said it was designed with patient privacy and convenience in mind. The Levine Center has a separate entrance, for example, and everything from the lobby to the exam rooms is designed to reduce patient anxiety.

Comfort and convenience have long been the prime motivations for an outpatient clinic located off the BMC campus, he said, noting that patients are often intimidated by the thought of trying to maneuver within a large medical center. Meanwhile, until the clinic was opened, outpatients were forced to coexist with emergency cases and other, much sicker patients at BMC.

This often led to delays in receiving treatment and, thus, no small amount of frustration, said Geehr, noting that emergencies naturally take precedence over more routine cases. This situation is what led the doctors to first propose an outpatient clinic, and it is ultimately what prompted them to go forward with their $3.5 million entrepreneurial venture.

“Before, we would spend a good deal of our time scheduling,” said Geehr, “and it wasn’t easy, because the schedules were full and needed to be broken into by these constant emergencies; the emergency room was occupying the CT scanner equally with scheduled patients.”

Beyond the ability to more effectively schedule patients and deliver results in a more timely manner, BRA also provides more convenience for patients on a number of levels — from the availability of parking to the homey atmosphere of the facility.

Said Masters, “this clinic was designed to provide an incredible degree of high tough and high tech. Our hallways are wider than they need to be, the examination rooms are much larger than required, and our CT and ultrasound rooms are twice as large as what you’ll find elsewhere. Space is one of the components of comfort; the more space — an open, unconfined feel — the more comfort.”

Kelly Fadding, a registered mammography technologist and ultrasonographer at the clinic, said the Levine Center — named after Dr. Joseph Levine, who introduced mammography to the Berkshires in 1966 — was designed to provide maximum levels of comfort and privacy.

“It evokes the sensation of a health spa, rather than that of an examination room or public hospital,” she said of the facility that boasts a LoRad MIV Platinum Mammography unit, an R2 Image Checker System, and other state-of-the-art equipment.

Beyond the hardware and software, however, the clinic features experienced specialists who know the Berkshires and the area’s specific needs. The three founding physicians have been practicing in the Pittsfield area for a combined 70 years, and they say that dedication to the area should serve them well in their entrepreneurial venture.

Eventually, Masters, Geehr, and Auerbach hope to have an MRI facility within the clinic. They have space set aside for the equipment, and they are hoping that, in time, the political climate will allow them to obtain it.

BMC was able to obtain special legislation — Geehr calls it the “stealth law” — that prohibits the doctors from acquiring a letter of exemption for the MRI, paperwork that is necessary for the clinic to sidestep ‘determination of need’ rules that grant MRI permits to hospitals only.

In the meantime, however, they say the clinic is filling a need they recognized long ago, and is becoming an asset for patients, area physicians, and a downtown area that has been struggling and needs new business ventures.

For the physicians themselves, the clinic allows them to stay in the Pittsfield area — something all three wanted to do, especially considering a nationwide shortage of radiologists that has created myriad opportunities for people in that specialty — and it has enabled them to fulfull some entrepreneurial aspirations.

“I call this my dream practice,” said Geehr, “because that’s what it is. Every doctor wants the opportunity to build the perfect clinic, and I believe that’s what we’ve done here; it has the best equipment, and it’s designed with the patient in mind.”

Geehr and his colleagues believe that, ultimately, there will be room in the Pittsfield area for their clinic and the facilities at BMC. For now, however, they say they’re providing something the area’s residents and physicians both need — choice.

“Health care services are improving at an incredible pace in Berkshire County, and we are proud to be a part of it,” said Geehr. “Those in need now have options, and choice is certainly a right of the individual in need of critical care.”

“Is It Alzheimer’s Or Old Age?”

Are Salons A Pain In The Neck? Shampooing In Hair Salon Sinks May Cause Harm, Study Reports