SPRINGFIELD — Recognizing that it had been meeting only about half of its blood needs through its blood bank, Mercy Medical Center recently unveiled a bloodmobile to target area businesses and civic organizations.
Diana Halima, blood bank manager, said that as surgeries and other medical procedures become more complicated and the population increases, blood needs rise as well, and at the same time the available donor pool has been shrinking, due partly to stricter screening regulations and more potential donors turned away.

The bloodmobile, the only one of its kind operating in Western Mass., is a 37-foot-long bus featuring two soundproof health history booths, four donation beds, and a refreshment area. “Were trying to keep donation times down to 30 minutes so we can have up to 60 donors on full days,” Halima said. A staff of five will perform all the functions normally carried out at the hospital site, from interviews to the phlebotomy itself, followed by the filtering, packaging, and transporting of the donations for processing.

“This will basically help alleviate the worries of a fluctuating blood supply,” she said. “We always experience shortages around vacation times, and there have been a lot of shortages nationwide for various reasons. We’re increasing our supply by increasing the access points. Instead of having just one fixed site, we’re making it more accessible by going out to the people.”

The bloodmobile was launched on June 25 at Springfield City Hall, as Mayor Michael Albano joined other city workers in donating blood. Since then, donation efforts have been conducted at Parkview Specialty Hospital, the Holyoke Women’s Health Fair, the studios of WGBY-TV57, Providence Behavioral Health Hospital, and Western Mass. Electric Co. Events are planned at the Springfield and East Longmeadow fire departments, C&S Wholesale Grocers in Westfield and Hatfield, Brightside for Families and Children, and more than a half-dozen other sites.

To sign up for a bloodmobile visit to a business, civic organization, or health fair, call Carol Gaines, the blood bank’s marketing coordinator, at (413) 748-9406. 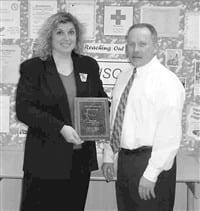