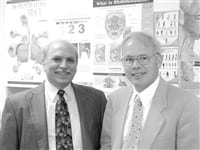 Spring is supposed to be the high-pollen season, and it’s hard not to miss those white spores blowing on the wind and settling along the road.

Even so, the incessantly wet weather of May and early June knocked out a good amount of the pollen threat, bringing some relief to those with a low tolerance for the white stuff.

So, what’s the problem?

Well, on the heels of pollen season typically comes mold season, and that has come a little early this year. In fact, all the rain has created a perfect environment for mold to take hold outdoors; meanwhile, houses with moisture-allowing foundation cracks and poorly filtered air have brought the sneezing and watery eyes inside.

“What’s been bothering people is the mold,” said Dr. Gopal Malladi of Keenan, Malladi and O’Neill, a regional ear, nose, and throat practice. “There are more than the usual number of mold spores in the air, and they won’t go away because of the wet weather.”

That means a potentially larger number of people in Western Mass. — a traditionally allergy-ridden area to begin with — will be sneezing and wheezing in the coming months. For some, it’s more than a nuisance.

“If the allergy is one of your triggers for asthma and affects your asthma to the extent that your airway closes and you can’t breathe, that can be serious,” said Deborah Niles, a pulmonary nurse clinician at Baystate Medical Center.

To these people, she told The Healthcare News, taking steps to reduce exposure to allergens could mean saving a trip to the emergency room. Fortunately, those steps are plentiful.

By conservative estimates, more than 40 million Americans suffer from at least moderate nasal allergies each year. The symptoms, which can include coughing, sneezing, congestion, runny nose, watery eyes, and wheezing, are caused by sensitivity to allergens, which are small protein particles that enter the body through inhalation, ingestion, or contact with the skin.

Pollen is a common allergen, and pollen cycles typically begin with tree pollens in early to mid-spring, grass pollens from late spring to early summer, and weed pollens from late summer into early fall, Niles said. The wet spring weather in Western Mass. has made these traditional patterns unpredictable, but they have certainly produced mixed blessings.

“I think it was really bad in the beginning of spring, but now, all the rain we’re having has really cut down on the tree-pollen count,” Niles said.

“I think it’s been about an average year at worst because all the rain acts to keep the pollen down. It’s the dry, windy days when the pollen really gets to circulate,” echoed Dr. Robert McGovern of McGovern and Bajaj Allergy Associates in Springfield.

However, he said, the rain has encouraged plenty of growth — in particular, a healthy grass crop — which will ultimately produce a lot of grass pollen. That phase peaked around early June and is expected to linger through August.

Worse yet, Malladi added, once warmer, drier weather does emerge, it will bring with it sudden surges in allergens instead of the gradual increases allergy sufferers might be accustomed to. “That’s how this year is a little different than past years,” he said. “But, who knows what the weather is going to do?”

Mold allergies, also caused by airborne allergens, are commonplace outdoors from spring through fall, but indoors year-round. With the moist weather making mold, not pollen, the worst of the current offenders, it helps to know why mold makes allergy sufferers sick, and how it can be controlled, Niles said.

Simply put, molds make tiny spores to reproduce. Those spores float through the air continuously, both indoors and outdoors. When spores land on a damp spot indoors, such as on wood, paper, carpet, or foods, they may begin growing — and growing quickly, especially if excessive moisture or water has accumulated indoors.
According to the Environmental Protection Agency, there’s really no practical way to eliminate all mold and mold spores in the indoor environment; the way to control indoor mold growth is to control moisture.

“Because of all the rain, we’re getting a damp, warm environment for mold, and this is a bad area to be in for allergies anyway,” McGovern said.

“The rain can cause more seepage in people’s basements, and that might promote more growth of mold,” McGovern’s partner, Dr. Mahesh Bajaj, added. “The other concern is schoolchildren. The conditions of many schools are not very good, and they can have leakages there that can affect the children.”

Take One of These

So, what relief is there for the sensitive souls who are exposed to allergens? Plenty — and most of it coming in the form of a pill or an inhaler.

“I think the nose sprays are usually the most effective,” McGovern said, but one problem with them is that people don’t like to take them that much. With a pill once a day, compliance is much higher.”

That’s where a whole family of non-sedating antihistamines comes in, including Allegra, Zyrtec, and Clarinex, Malladi said. “They help people treat their allergy symptoms without getting a sedative effect.”

A “third-tier” option, as McGovern called it, but one that is steadily becoming more popular, is a drug called Singulair, which can be inhaled from a dispenser as a powder or ingested in pill form. It works on many allergy sufferers because it acts in a different way than antihistamines do, Malladi said.

“When you have allergies, the phenomenon that’s going on is that histamines and leukotrienes cause symptoms,” he said. These substances are natural biological compounds that affect the body in different ways during an allergic reaction. “The Singulair counters the leukotriene part of it,” Malladi explained. “People are using that more often than they used to.”

In addition, McGovern said, Singulair is attractive to consumers because its side effects are very mild.

But, doctors and nurses stress that drugs aren’t the only remedy to ease the suffering. Niles outlined a series of steps to take to reduce the effects of different types of allergens.

To combat pollen, she said, allergy sufferers should check the pollen count and stay indoors when it’s high or on windy days — or consider wearing a face mask outdoors. Keeping windows and doors closed at home helps, as do air conditioners set on ‘circulate’ to filter air. Pets should be washed regularly, and people with allergies should wash their hair and skin before going to bed.

The mold spore count can also be checked before going outside. Other ways to resist mold allergies include using a dehumidifier and emptying it daily, keeping plants outdoors, cleaning up leaves and weeds, fixing leaky faucets, and cleaning the bathtub and shower curtain regularly with water and bleach.

Plenty of people are also allergic to dust mites, Niles said — the tiny bugs that thrive in mattresses, curtains, and carpets, to name a few places. To lessen the severity, mattresses and pillows should be encased in airtight covers; bedcovers, clothes, and children’s stuffed toys should be washed in hot water at least once a week; and carpets should be removed, where possible, and replaced by washable rugs.

Speaking of bugs, Niles said, cockroaches also produce a potent allergen. The creatures need food and water to live, so allergy sufferers would do well to keep the kitchen clean, take out the garbage daily, fix leaky pipes, seal all cracks leading into the house, clean up clutter, use roach traps, and, in severe situations, give the house over to a pest-control service for a day.

Finally, the family cat or dog is often an allergy trigger. Keeping the pet out of the bedroom at all times could help, along with washing the pet weekly and washing hands after handling the pet. Along the same lines, bird feathers can cause equally severe reactions, so sensitive people should avoid products made from feathers. And, if a family is trying to decide on a pet, there’s always the option of buying one without fur or feathers — a fish, for instance.

“If we’re talking about nasal allergies, it’s a matter of learning how to avoid these allergens,” Niles said — particularly if asthma is also a concern. “If you’re already having shortness of breath due to lung disease or asthma, and you add this component in, it makes you even more short of breath and can really limit your activities of daily living. Children can miss school, people can miss work — it can become a real problem for you.”

For many allergy sufferers, Malladi said, the best medicine is simply being careful about when they take to the outdoors.

“Usually, people with pollen allergies feel better after the rain, so if they need to do something outside, that’s when they do it,” he said.

Particularly for those whose allergies pose serious concerns — rather than mere discomfort — it comes down to being aware of one’s surroundings, Niles said.

“It’s important to identify what the allergens are and the proper steps to reduce them or control them,” she said. “Combined with asthma, they can cause trips to the ER, or even admittances into intensive care.”

And every day is different, she added, making those precautions even more challenging. “One day, you see little white things floating in the air, and another day you don’t. Meanwhile, with mold allergies, they’re year-round and could be indoors or outdoors” — and they’re not so obvious.

The barrage of rain the region just experienced did throw the region’s allergy sufferers for a loop, Bajaj said, meaning taking precautions became a little more challenging — but not impossible. “Because of the prolonged rain this year, tree pollen might be less severe this year — but that could be the only way it’s less severe.”
For those sneezing and coughing their days away, the mixed blessings of a rainy spring seem like no blessing at all. But, clearly, there are plenty of steps to take to start breathing at least a little easier. 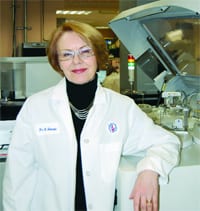 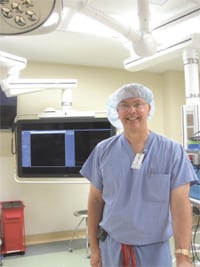