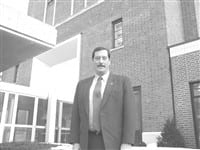 Holyoke Hospital President Hank Porten says the main admitting area at the facility was built in 1953, when the hospital was seeing perhaps 60 people a day through its doors.
Today, that count is closer to 600-800 when one considers both inpatient and outpatient volume, noted Porten, who said that these are but a few of the numbers that explain the need for an $11.1 million expansion the hospital is set to undertake this summer.

Porten told The Healthcare News that with some notable exceptions, such as the main admitting area, the infrastructure within the 108-year-old hospital is “fine for today,” but it certainly won’t be fine for tomorrow given the way technology is advancing and health care is changing.

“For us to be providing the service that will be demanded in the future, we’re simply going to need more square footage,” he said. “In order to meet the next wave, we need to be different, and we need to prepare ourselves.”

Thus, the hospital is embarking on an historic 33,000-square-foot expansion project — one of the largest in its 108-year history — which will include two new operating rooms and two new endoscopy rooms, as well as the renovation and/or expansion of the patient registration department, front lobby, recovery rooms, and other facilities.

The initiative is ambitious — and expensive, especially at a time when most hospitals are still struggling to break even, Porten acknowledged, but it is also very necessary if the hospital is to remain competitive in the decades to come.

Porten told The Healthcare News that the expansion project, the first major addition at the hospital since 1987, has been on the drawing board for nearly two years. It is being driven by soaring volumes of outpatient care and advancing medical technology, both of which require more square footage.

Due to begin this summer and be completed in 18-24 months, the expansion should give the hospital the breathing room required to adequately meet patient needs for at least the next 20 years, he said.

The new construction will involve two floors of the facility and will begin at the main entrance of the hospital. The centerpiece of the expansion will be two new operating rooms — one to be 725 square feet and the other 680 square feet — designed to accommodate the high-tech equipment that has become essential in the modern operating room.

“The equipment that we’re using today is much more sophisticated than a couple of decades ago,” said Porten. “Many surgeries are performed with cameras, video equipment, and other high-tech tools that allow surgeons to make very small incisions, which in turn reduces the recuperation period. That’s wonderful for patients, but all that equipment requires a lot more space.”

The project also involves construction of two new endoscopic rooms, which will be located adjacent to the new operating rooms for greater convenience. Also, the recovery room space will be more than doubled, accommodating 15 beds instead of the current six, Porten said.

With the new construction, as well as the renovation of existing surgical areas, the hospital will have a total of 10 operating rooms, four of which will be larger than 600 square feet. These will help accommodate the rapid growth in surgical procedures at the facility, which have increased steadily in recent years and numbered 9,200 in 2001.

Plans also call for creation of a new dictation area for physicians, added storage space for high-tech equipment, and increased space for anesthesiology services. The hospital’s gift and coffee shop will be expanded, and waiting areas in the Laboratory and Cardiology Department will be significantly increased to improve patient care.

The project will funded through a combination of traditional lending sources and a capital campaign tasked with raising $4 million. In addition, the final version of the Fiscal Year ’02 Labor, Health and Human Services, and Education Appropriations Bill included $800,000 to support the hospital’s expansion project.

Rather than bond for the remaining $6 million needed for the project — an expensive proposition in today’s economy — the hospital will utilize what amounts to a capital leasing strategy that offers a payback period of seven or eight years, rather than the 30-terms associated with traditional bonding.

The debt service will be considerable, but the hospital’s board feels confident that it can take on that expense, even at a time when most hospitals are struggling due to inadequate reimbursement rates from both public and private payers.

As for the capital drive, both Porten and campaign co-chair Joseph Wright acknowledged that the timing could be better, but they expressed optimism that the worthiness of the cause will prompt businesses and individuals to open their wallets.

“A lot of people are saying it would be better if we did this two years ago when the economy was much better, and they’re right,” said Porten. “But for good causes — and this is a good one — people will still give.”

Wright, who will co-chair the campaign with his wife, Angela, is a veteran of several Holyoke Hospital fund-raising drives, including initiatives for the 1987 expansion and another in 1963. He told The Healthcare News that large businesses and foundations will form the first tier of projected donors. Other groups include smaller businesses, individuals, and the extended Holyoke Hospital family, which includes employees, the medical staff, administrators, and the Board of Directors.

A former executive with FoodMart, Wright, a long-time city resident and noted philanthropist, said the community has historically supported the hospital, and he’s confident that businesses and individuals will pitch in, despite the sluggish economy.

Porten described the expansion project as infrastructure-intensive, not jobs-intensive, although there may be some additional hiring down the road due to the expansion of the operating room facilities.

In short, the project is being undertaken to give the hospital the room it needs to grow, said Porten, who stressed that the hospital isn’t necessarily cramped, but will be if current trends continue as expected.

A Dignified Alternative To Litigation When Conflict Resolution is Your Priority, Take A Look at Collaborative Law