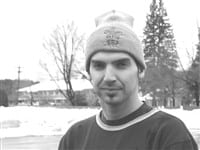 John Morello had dreams of being an actor, but eventually he tired of speaking other people’s words.

He remedied that when he turned to stand-up comedy in the early 1990s, but soon he found himself wanting to say something more important.
That’s when he started digging in the “Dirt.”

Dirt is Morello’s one-man show on substance abuse and choices that he has taken to middle schools and high schools across his home state of Massachusetts and, for that matter, the entire Northeast.

Inspired partly by his own experiences — his brother struggles with heroin addiction — the show finds Morello portraying a number of characters, aiming to provoke thought without preaching. He leaves students with no easy answers, but he does leave them with laughter and a few tears.

“They know it’s not the typical ‘just say no’ message,” he said. “They’ve heard that. They feel this is more honest.”

Morello, 34, who was born in Detroit but has lived most of his life in the Worcester area, carries with him a stack of yellow papers — comment cards filled out by students who have seen Dirt. They’re clearly important to him.

“I try to be cool and all that bull,” one wrote. “I was laughing so hard at that stoner character, and now it is midnight, hours later, and I’m crying. I met someone who seems not only to understand what is going on in the cold streets out there but who is able to change it.”

Morello himself is more modest about his goals. He wants teenagers simply to think about the choices they make, and in that, Dirt has been a success.
Just Say … Something New Morello considers himself the survivor of a “high-risk childhood,” as a teenager witnessing friends and family spiral into substance abuse — sometimes fatally. As a teacher in a treatment center for teens several years ago, he witnessed teenagers repeating their own families’ cycles of self-neglect and abuse.

Morello recalls the anti-drug messages he heard when he was in school, the ones that depended on slogans, cliches, and scare tactics. He doesn’t believe they’re effective presentations, and he’s not interested in that style; he’s declaring war on drugs, not drug addicts, but he’s coming from a place that teens recognize. And that empathy is evident to his audience.

“Kids tell me it’s one of the most ‘real’ assemblies they’ve ever seen,” he said. “I’m holding up a mirror to people they can relate to.”

Throughout the show, Morello takes on the persona of eight such people. They include a young man searching for ecstasy; a college-bound woman who drinks socially; and a young “dude” sharing his theories about marijuana and “harmless” hemp.

At one point, Morello mixes in a monologue from a World War II veteran reflecting on his choices in battle and his sacrifices for the present generation. Humor plays a part as well, particularly in scenes depicting a comical experience with a teen crisis hotline and a poetry festival gone wrong.

Throughout the hour-long show, recognizable rock, hip-hop, and techno music creates a buffer between characters and provides a bit more relevance to the audience.
Creating a bond is necessary, he says, because if students see him as just another adult talking down to them, they won’t be open to his message. When he’s allowed time to talk with students afterward, he can tell whether that bond was successfully forged.

“That doesn’t surprise me at all,” he continued. “I think kids nowadays are more willing to discuss issues. My generation buried a lot of our feelings and didn’t discuss things. When we were growing up, it was just implied that you were going to drink and smoke weed. Today, they’re more willing to be
vanguards and don’t necessarily feel that they have to do drugs out of peer pressure.”

And that climate, Morello said, is a healthy one to encourage teenagers to consider the impact of their decisions.

“I am the kid who is in the band who stayed after and talked to you a bit,” one of the yellow papers reads. “Every kid who was there is going to think twice before they light up again … you got everyone to wake up and think about what is going on.”

Morello knows that many of the students for whom he performs, even those who laugh and cry at his words, are still going to fall into substance abuse one day. He knows he’s not going to permanently reach everyone. But if just a few at each show “think twice,” as the boy in the band suggested, that might be enough.

“I think the aim of the show is to have them be aware of the choices they’re making,” he said. “Every substance brings changes to your body, whether it’s alcohol, ecstasy, weed, even caffeine. I want to use my creativity to raise that awareness.”

The effectiveness of his message is spreading. In addition to the schools that provide his usual venue — including excursions into the Northampton-Amherst area, which he would like to expand upon — Morello was recently booked as the keynote speaker at a convention of New Jersey guidance counselors.

As he performs his monologues, students can see photographs lining the stage. Most of those in the photos are smiling. Many are young. All are dead now, victims of substance abuse.

Morello ends his program with a segment called “Voices from the Dirt,” which brings home the struggles of both addicts and those who love them. Morello is one of the latter, and the words ring true.

“I relate to the pressures kids are dealing with,” he said simply. “And they really respect that.”

Sweet Is Not So Sweet Diabetes Is on the Rise, and the Forecasts Are Troubling

Hospitals Ranked by Number of Beds