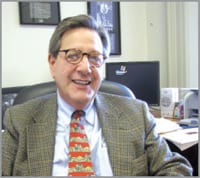 Mike Suzor was about to use the word ’experiment’ to describe a new partnership between Springfield Technical Community College, which he serves as assistant to the president, and Holyoke Community College in the broad realm of workforce training. But he then decided that the term didn’t exactly fit.

It is a new program called TWO — Training and Workforce Options, which was launched this past summer after nearly a year of market analysis and strategic planning. Through the initiative, area companies and nonprofits can contract with a collaborative involving the two schools to receive training in a number of areas, from customer service to sales; from technology use to social networking and marketing.

Until the program was launched, both entities provided workforce training independently and on a fairly limited basis, said HCC President William Messner, noting that the schools pretty much knew — and a consulting firm verified these suspicions — that they could do much more if they worked together.

“They concluded that we weren’t doing ourselves any favors by both of our institutions going out and essentially knocking on the same doors, sometimes with duplicative offerings, and, in other cases, neither one of us able to respond completely to the needs due to resource constraints,” said Messner, referring to the broad conclusions contained within the “Workforce & Economic Development Competitiveness Survey Report” prepared for the schools by the Clements Group. “And also, giving the impression that here are these two publicly supported institutions competing against each other in an area where there are all these unmet needs.”

So the two community colleges located only nine miles from each other will knock on doors together (in a figurative sense), said Suzor, adding that, while ’experiment’ doesn’t work as a descriptive adjective in this case, the phrase ’business venture’ certainly does.

Elaborating, he said that TWO represents a valuable potential revenue stream for STCC and HCC at a time when budget cutbacks at the state level are making this a very challenging time fiscally for all public institutions.

“In these tough times, where state support of public higher education is being reduced, seemingly on an annual basis, the public higher-ed sector needs to look at every way possible to control expenses and generate income,” he explained. “This is one of those revenue streams.”

Meanwhile, the cooperative has been created at a critical time for the region’s workforce, when a still-sluggish economy that is keeping many employers from adding more staff is juxtaposed against an aging workforce, growing legions of retiring Baby Boomers, and a need for employees in every business sector to add to their bases of knowledge.

The result is a glaring need for more workforce training, among both businesses and nonprofits, said Messner, and a real opportunity to meet that need.

“I’ve heard from some business owners that they not only need more workforce-training programs, but that publicly supported institutions should be most efficient in the use of their resources,” he explained, “and that the image of two public institutions competing against one another wasn’t the right image. And we concurred.”

Suzor told HCN that administrators at both colleges asked him to take a leadership role with launching the new venture because of his experience with startups — he started, grew, and eventually sold two technology companies — and also because that term ’startup’ is another effective way to describe this effort.

Chronicling his efforts in business, Suzor recalled that, in the ’70s, he and a partner sold computer systems to distributors in many sectors. They wound up buying a firm that had a software system that automated office furniture dealers, and that larger concern was acquired six months later by Steelcase, for which Suzor, his partner, and 25 workers became employees. In the ’80s, he and another partner started another company that sold inventory-management technology (bar coding and software) to companies in several business realms, and eventually expanded into higher education.

He didn’t want to make too many comparisons between TWO and his own entrepreneurial endeavors, but noted that there are common denominators, most importantly the ones involving supply and demand, or need in the marketplace, recognition of an opportunity, and aggressive steps to seize that opportunity.

That need is spelled out in two paragraphs from the report written by the Salt Lake City-based Clements Group:

“Employees with a strong work ethic, up-to-date technical skills, and ability to think critically, solve problems, and work in teams to leverage ideas to improve performance are the cornerstones of operational success in a global economy. For decades, Hampden and Hampshire counties — aided by HCC and STCC education — employed in level, line, trade, technician, and supervisory-level occupations have driven the region’s economic growth and success.

“Unfortunately, as the region’s Baby Boomer generation matures, the projected shortage of qualified entry-level and experienced supervisory-level employees is becoming a reality. New and high-growth industries require workers with sophisticated skills needed today and the ability to master the skills that will be needed in the future. … Given the projected decline in the number of high-school graduates, HCC and STCC cannot look to the next generation of K-12 students as the sole solution. The colleges must provide further workforce-development leadership in planning, organizing, and supporting educators, community leaders, and industry to define and invest in scalable systems focused on specific workforce solutions to replenish the pool of qualified workers and improve the performance of current workers.”

Slicing through all that and subsequent findings in the report, Messner said it became clear to administrators at both schools that the best opportunity to capitalize on this growing, region-wide need is to work in cooperation, not competition.

Here’s how the collaborative will work, and how it represents change from what transpired in the past:

Until TWO was created, said Messner, both schools did what amounted to some cold calling to area businesses and nonprofits, and had limited success serving clients ranging Peter Pan Bus Lines to the Holyoke Gas & Electric Department to Florence Savings Bank, with non-credit offerings delivered mostly on-site.

He stressed that some doors weren’t knocked on “because neither one of us had the resources to reach all the doors.”

With this new collaborative, a team of four sales individuals — two with each college — will operate using the Web site www.trainingandworkforceoptions.com and a single phone number, (413) 755-6100, and be much more aggressive and proactive with regard to what the schools can provide. For businesses and nonprofits that are willing to contract with the schools, customized workforce-training programs will be created utilizing one or both colleges, said Messner.

“Are we going to be able to meet all needs now that we’re working in an integrated fashion? Probably not,” he continued. “But we’re going to do a lot more effective job than if each of us was still trying to do it on our own.”

Suzor said the sales teams are working with a database of some 7,000 organizations, with a strong focus on the largest entities in each of the four counties, but especially Hampden and Hampshire. “And we’re verticalizing the approach; we’re targeting the manufacturing sector; the financial sector, which includes banks, insurance agencies, and accounting firms; and we’re targeting nonprofit agencies as well.”

Net profits will be split equally between the two schools, he continued, noting that workforce-training initiatives, while part of the schools’ missions, have not been extremely lucrative in the past, and the hope and expectation is that they will be moreso in this collaborative effort.

And while most startup ventures have a business plan drawn up before the concept is launched, with TWO, organizers will analyze first-year results and potential moving forward before putting such a plan in writing.

“We’re looking at year one as a period for gaining traction and also gathering the intelligence needed to put together an intelligent business plan,” he explained. “We’re learning a lot, and one thing we know is that this is challenging; we’re two separate entities, two discreet units within the public higher-education system; there are a lot of logistical challenges involving everything from billing to marketing, and many things we still have to figure out.”

Overall, though, the prevailing sentiments are optimism and confidence that TWO will become one of those proverbial win-win propositions, with the region benefiting from a more formal, more ambitious source of workforce training initiatives, and the colleges gaining what could become a reliable revenue stream at a time when they need one.

It is this confidence that led Suzor to quickly back away from that word ’experiment,’ despite the unknowns and logistical hurdles. “Both presidents [Messner and STCC’s Ira Rubenzahl] see the value of the two community colleges working together,” he said. “And they see the power of the two organizations going to the market together. Everyone wants to see this succeed.”