Tom Szumowski just wanted to ride his motorcycle again.
Actually, that was the long-range goal. There were more immediate and basic needs and desires — like walking, driving, and going back to work.

These became stern challenges after Szumowski suffered a spinal cord injury following a surgical procedure. But from the day he arrived at the Weldon Rehabilitation Hospital, he was determined to meet and overcome those challenges.

And in the process of doing so, he became a real inspiration to both the staff people at Weldon and other rehabilitation patients at the facility. That’s why he was one of nine area residents recognized as Weldon Ambassadors at an awards ceremony in September.

This was the eighth annual Weldon Ambassador Awards, said Jill Labelle, manager of Occupational Therapy at Weldon, who told The Healthcare News that the program has become a popular way to recognize patients and family members for their courage and perseverance, but also to spread the word about Weldon and the broader mission of the Sisters of Providence Health System.

“We call them ambassadors because, in many ways, they represent Weldon in the community,” said Labelle. “Not only are they proud of what they’ve accomplished, but they certainly give us thanks back and help share with the community what we do and how we do it.”

The Healthcare News looks this month at the ambassador program and how it has effectively shed light on the daily battles fought by patients in rehabilitation and their families.

“Our ambassadors help us as we try to help people understand rehab,” said Labelle. “And that’s an important assignment.”

If Tom Szumowski had an appointment for therapy at 2 in the afternoon, he would often arrive at Weldon at 8:30 in the morning, said Labelle, who was paraphrasing the nomination form recommending Szumowski for an ambassador award.

“The physical therapist who nominated him did so because from the day he got here he was determined to walk again, to ride his motorcycle again, and to return to work — and he participated in therapy with her for more than a year,” said Labelle. “He never gave up hope, and he had the courage, strength, and motivation to achieve all his goals.”

Those traits characterize all of Weldon’s ambassadors, said Cheryl Moriarty, an occupational therapist at the facility, who used the word inspire early and often to describe how the ambassadors impact staff and other patients.

And the value of that inspiration cannot be underestimated, she said, noting that rehab patients struggling to achieve their goals often draw additional strength and motivation from seeing others overcome their illness or injury.

“When other patients see people like Tom, who worked hard every day and simply refused to give up, it really does inspire them,” she said. “And that goes for the staff as well.”

Said Labelle, “He was one of those patients that everyone in the building got to know, because he was here every day, all day, no matter when his appointment was. He inspired a lot of people.”

There are many similar stories among this year’s roster of winners, said Labelle, who told The Healthcare News that the program has grown and evolved over the years to reflect the many aspects of rehabilitation and the experiences of people living through it.

The original ambassadors were a group of patients who were rehabbing from spinal cord injuries and eventually formed a wheelchair basketball team that played other squads in the region. “They were true ambassadors,” she said.

Over the years, the awards, which are based on nominations from staff members, have been presented to individuals who have battled back from a wide array of illnesses and injuries. And in 2001, the program expanded again, this time to recognize family members of Weldon patients who were instrumental and inspirational — there’s that word again — in their loved one’s successful rehabilitation.

This year’s roster of ambassadors includes Estelle Anderson, who cared for her husband following his stroke and truly inspired the staff with her dedication to getting her husband home and caring for him there.

“Often times, rehabilitation is just as hard, if not harder, on the family member than it is on the patient,” said Moriarity, who told The Healthcare News that Anderson had quite an influence on staff members and other patients because of her determination.

“She’s the reason he’s home today,” she said. “She was with him for every therapy session, and she was determined to see him progress.”

Ambassadors come in all groups, said Labelle, who noted that another of this year’s winners, 6-year-old Cullen Bailey, who went into rehabilitation for a mitochondrial disorder, had a positive influence on others at Weldon.

“He began coming here to our pediatric outpatient program propelling his wheelchair, and he worked hard to get up and start walking so he could go to school,” she said. “He was very determined, and everyone around him drew strength from him.”

Often, Bailey would have therapy sessions in the adult rehab unit, where his determination had a visible impact on older patients, said Moriarty.

“Here was this little kid trying so hard,” she said, “and there would be stroke patients in the room saying, ‘if he can do it, I can do it.’”

Other winners this year were:

Labelle told The Healthcare News that the ambassador awards, presented during National Rehabilitation Week, have become an important vehicle for educating the public about rehabilitation medicine, and for showing what can be done when determined individuals set out to achieve specific goals.

“The awards are really a tribute to the human spirit and overcoming adversity,” she said. “And that’s what rehabilitation is all about.”

Today, Tom Szumowski is walking without any assistive devices. He is driving, and working part time. And he’s beginning the process of getting back on his motorcycle.

The road back has had more than its share of bumps, but he’s shown that with determination, individuals suffering from spinal cord injuries, strokes, head injuries, and other maladies can reach their destination.

And that’s why he’s an ambassador. 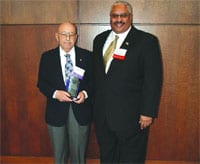 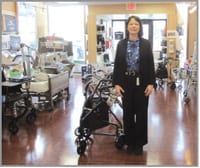