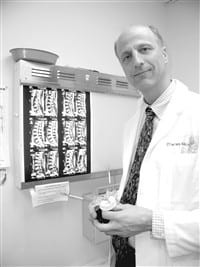 To Dr. Charles Mick, it’s like coming out of the Stone Age.

That’s how he characterized the range of treatments for osteoporotic spinal fractures only 10 years ago, before advanced, minimally invasive techniques began to emerge.

One of those techniques is kyphoplasty, of which Mick, a surgeon at Cooley Dickinson Hospital in Northampton, is a sort of pioneer in Western Mass.
Kyphoplasty is basically the next step following the introduction about five years ago of vertebroplasty, the injection of a medical cement into a fractured vertebra to stabilize it. Kyphoplasty improves on that technique by first stabilizing the bone with an injected balloon.

“It’s a new technique that will hopefully reduce fractures and cause us to end up with better long-term results,” Mick said. “Certainly, it’s appealing if you can straighten the fracture before fixing it; that’s better than fixing it in a misaligned position.”

As surgery moves increasingly toward minimally invasive procedures to reduce pain and help patients recover more quickly, Mick hopes kyphoplasty, despite its cost, becomes the latest technique to catch on in hospitals. Right now, he’s blazing the trail in the region.

Getting with the Times

When Mick refers to the “stone age” of spinal fracture treatments, he recalls that, only a decade ago, doctors would prescribe braces and bed rest along with medication.

“Over the course of several months, the fractures would heal, but for older people, it can be horrible to be in pain that long, or to be limited for that long,” he said. The situation was analagous to hip fractures, which were treated with bed rest 30 or 40 years ago before surgeries became common, allowing patients to be up and around much sooner.

The breakthrough in spinal fractures — which, despite the attention hip fractures get, are actually the number-one type of osteoporotic fracture — came during the 1990s, when vertebroplasty was introduced in the United States.

“About 15 years ago in France, people got the idea of injecting a cement into fractured vertebrae to stabilize them, relieve pain, and let people get up and start moving right away,” Mick said. Vertebroplasty is performed by inserting a needle into the bone, injecting the cement, and letting it harden. As with many other medical advancements, he said, it took some time for the technique to cross the ocean and become commonplace here.

“We’ve had very good results with vertebroplasty, but one drawback is that the cement is injected without trying to correct the collapse that occurs when the vertebra fractures, and that can lead to deformity,” he explained. The classic deformity, called kyphosis, takes place in elderly people who have endured multiple fractures; they wind up with a rounded back.

Kyphoplasty, on the other hand, adds a key step to the treatment. By inserting a balloon through a needle — think of an angioplasty balloon, only stronger — and inflating it inside the vertebra, a surgeon restores the actual height to the bone. The cement is then inserted in the same way, but, unlike in traditional vertebroplasty, the substance fills a correctly restored space and reduces potential deformity of the spine.

“We’re optimistic that we’ll be able to prevent any deformity older people can get with the kyphosis,” Mick said, adding, “we also know that, when the vertebrae collapse, it can have an effect on lung function, and we hope that, by reducing that collapse, we can prevent those effects.”

There is another benefit to kyphoplasty beyond prevention of deformity and quicker recovery, he noted. When cement is injected into the bone through vertebroplasty, it is possible for it to migrate and spread into other areas, which can cause complications. Kyphoplasty, he explained, enables doctors to more accurately place the cement into the small space in which it s needed, making it a safer procedure.

That’s one more reason why Mick hopes the technique catches on quickly. About 24,000 procedures have been performed nationwide — only seven at Cooley Dickinson so far — and progress in making the technique more commonplace has much to do with its cost, which is greater than vertebroplasty.

However, “the increased cost of performing kyphoplasty is justified by the improved results,” he argued. “With every new procedure, we need to compare those factors to the cost. We’d like to be able to prove that the results are worth that added expense.” The relative safety of the procedure, as much as its effectiveness, should be considered in making that assessment, he said.

The implications of any improvement in treatment are significant, he stressed. About 25 million American women suffer from osteoporosis, as well as 5 million men. Of those, some 1.5 million are stricken with an osteoporotic fracture each year; in fact, by age 90, one in every two women — and one in six men — will sustain some type of fracture related to the condition.

Mick did concede that there might be some circumstances in which kyphoplasty isn’t the best option, explaining that restoring normal alignment over the long term is a more important consideration in a 30-year-old, or even a 60-year-old, than a patient pushing 90.

Meanwhile, the benefits of developing new treatments such as kyphoplasty goes even beyond osteoporosis, Mick said. Cancer patients who develop tumors often end up with collapsed bones, for example.

“It may be possible to use kyphoplasty in the future to reduce these other fractures,” he said. “Instead of doing open surgeries on the knee or the wrist, we may be able to use the same balloons and do these injections instead of open surgeries.”

And as the cement — its medical name is polymethylmethacrylate, or PMMA — becomes more commonplace, research-ers are already developing an actual bone-based substance that can harden and serve as a more natural substitute. Continued advances could reap benefits across many types of injuries, Mick asserted.

Despite the impressiveness of new techniques, Mick emphasized, the most effective weapon against the effects of osteoporosis remains decidedly low-tech — and that is simply a regimen of prevention and screening.

“We’re treating fractures at one end, but at the other, we’re trying to put ourselves out of business by identifying them early on and preventing them,” he said.
According to the National Osteoporo-sis Foundation, a hip fracture carries a 10{06cf2b9696b159f874511d23dbc893eb1ac83014175ed30550cfff22781411e5} to 20{06cf2b9696b159f874511d23dbc893eb1ac83014175ed30550cfff22781411e5} mortality rate over the course of a year, and other types of fractures can also pose serious threats. All post-menopausal women are at greater risk of osteoporosis, but other risk factors — such as smoking, chronic steroid use, diabetes, thyroid disease, family history, or previous fractures — should raise warning flags that screenings should start well before the senior years.

If you’re at risk, you should be targeted for osteoporosis and started on medication before the first fracture or immediately after to prevent a second or third,” Mick said.

“We commonly see someone who falls or has a risk factor and is not started in medication for osteoporosis, and they come back five years later with some fracture that could have been prevented. That message has still not been taken up by the medical community. We need to be more aggressive at identifying that first fracture and getting more people on medications.”

Of course, despite his hope, surgeons who treat fractures won’t be going out of business for lack of it anytime soon. And for those who struggle with spinal fractures, recovery and pain management are getting easier all the time.

That cement-like material may harden like stone — but the stone age in fracture treatment is rapidly becoming a thing of the past.